Here on the Ground/Heck of a Season

As the bridges behind me are all burning down, I stood in an empty Grindhouse lamenting on the season that was. And it was a Heck of a season.

Share All sharing options for: Here on the Ground/Heck of a Season

It was midnight in Memphis, and my brother and I sat alone in an empty FedEx Forum, nothing but the workers left cleaning and clearing it out. The 2012-2013 season was over for our beloved Memphis Grizzlies. Swept. We made it all the way to the Western Conference Finals, and then just ran into a buzz saw. It was cold on the ground, after the fall. There were people around, but now they've all gone. I wonder, how'd we end up here?

As I sat in my seat for the last time that year, Section 110, Row H, number 4, my mind traveled back in time to the first sports playoff experience of my life: October 2010, Atlanta, Georgia, Game 3 between the San Francisco Giants and the Atlanta Braves. My hopes were high, because not only was this my first postseason game in the history of ever, but this was the weekend right before I was set to propose to my girlfriend, and I was using this as a bit a good luck charm to start the week off right.[1] I sat several rows above the Braves dugout, with my best friend, my kid brother, and a 50-year-old lifetime Braves fan. We were riding high off of the Braves surprise Game 2 victory, led by Rick Ankiel's home run into McCovey Cove, not to mention, this was legendary coach Bobby Cox's final run as manager for the Braves, and everyone in Braves Country wanted to win 11 for number six. 50,000 screaming fans, waving their foam red tomahawks up and down, desperate for a victory. It was going to be legendary. And then The Brooks Conrad Game happened.

The Braves pinch-hitting specialist, who was thrust into duty due to the severe rash of injuries to the normal starting infielders, completely melted down in the field. He booted a sure fire double play ball. He dropped an easy pop up in shallow right field. He let a ground ball go right through his legs. Two of the Giants' three runs could be directly attributed to Brooks Conrad. While I'll always remember jumping up and down with my brother in my arms, him slapping me in the face while trying to high-five me, after Eric Hinske's go ahead homerun, that day is forever marred by the memories of The Brooks Conrad Game.[2] We slumped into the car and headed home. With no words to say, nothing to do to fix what happened there, we all set silently as we listened to Here on the Ground by Todd Whatley and the Frontmen.

Every single second of that trip came back to me in those moments sitting there in a depressingly empty Grindhouse, and had the large group of Spurs fans gathered around Danny Green not gotten so loud they broke me from my daydream, I may honestly still be there reliving it. But it ended, and I was transported back to reality, the harsh reality that this specific group of Grizzlies had no more games left to play together.

It had been an incredibly long season for a team that was more bipolar than the Memphis weather. 12-1 start, the Mo Speights/Wayne Ellington trade, the Rudy Gay trade, the 15-1 stretch, coming back from 0-2 on the Clippers, and the Western Conference finals. As I sat there in my seat with my brother, we remembered it all.

"Right there...that's where Rudy Gay took too long to hit the game winning shot against Indiana on Martin Luther King Day." I said to him as we began our walk down memory lane. We remembered it all; from Wes Matthews torching Tony Allen for not respecting him, to Jason Smith lighting up the Grizzlies because of course, the Rudy shake and slam over LeBron, Tony Wroten's block of Kobe Bryant, that time Manu got a handful of Rudy Jr. when Gay went up for a slam, to the dozens and dozens of Tony Allen missed layups and Jerryd Bayless foot on the line twos. Every little thing, we remembered it all. And all of it was over.

Over, because the San Antonio Spurs were better, just flat out better. They had better depth, better stars, and they were much better coached.

Listen, you can't expect perfection, but it's colder than I expected here on the ground. I thought the Spurs would make quick work of us,[3] my official prediction was Spurs in 5, but I didn't think it would be this quick, and I didn't think it would sting this badly. But here on the ground where I lay, I can see all the mistakes that we've made. Tony Allen should have gotten more minutes. We needed better outside shooting. YOU'VE GOT TO MAKE YOUR FREE THROWS! It is much colder than I expected, but I wouldn't trade a second, here on the ground.

while it feels like the person writing this script put down the pen just a little too soon, we must not forget to be grateful for the history we all witnessed

It truly was a heck of a season, one of absolute vindication for the franchise and the city. No one could have seen this coming during those seasons in the Pyramid all those years ago. Yet here the Grizzlies were, at the center of the basketball world, underneath the brightest lights, with all eyes on them, and while it feels like the person writing this script put down the pen just a little too soon, we must not forget to be grateful for the history we all witnessed this season. 56 wins in the regular season, 24 wins on the road, single-digit losses at home. Heck of a season. Facing an 0-2 whole, with everyone and their grandmother penning the obituaries for the ‘Grit n Grind' era Grizzlies, coming back and "sweeping" the Clippers by double-digits each game. Watching as Tony Allen and company turned the water off of the Thunder offense. Advancing one game farther than any other Grizzlies team in franchise history, and then stopping right there. Heck of a season, boys.

I stood on the court with my brother, walking over all the spots where less than an hour earlier two Western Conference powerhouses played their hearts out. There was a scuffmark on the logo on the floor, and that was significant to me, though I don't know why. Maybe because it made it real, more than just a picture or an image, but a real place where this all actually happened. I walked over to the middle of the Grizzlies logo at center-court, stood in the place where Marc Gasol would normally battle for the tip off, and just looked around. 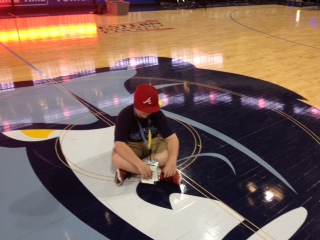 I wasn't caught up in what could have been; I just wanted to hang on to every moment of this season while I still had the opportunity. I wanted to be mad, but there was no reason to be. The Grizzlies didn't get hosed, they weren't robbed; they were just shown the door by a Hall of Fame coach with Hall of Fame players and several key cogs that all knew their roles. There is no shame in that.

It will be several months before any of us step foot in the Grindhouse again, before we know exactly what the group of guys we'll be supporting next year look like, before I lay eyes on the beauty that is the little redheaded girl again.[4] Talk has already begun about blowing up the team, rebuilding around Mike and Marc, and forming a new identity. A greater mistake, there is not.

The Grizzlies know who they are and where they stand, even if it is in the mud. With a few roster tweaks, not overhauls, the Grizzlies can get right back to where they were next year, and then go even farther.

For now though, their journey, and ours with them, has come to its end, and what a beautiful ride it was. We ventured into uncharted waters, we put the city on the NBA map, and we didn't once bluff. The story may not have ended happily, but we'll regroup, and come back next year, and try again to win the last game of the season. This is our team, and this is our city. We just have to believe.

[1] For those of you that have been reading this site for a while, or follow me on twitter, you know that not only am I not married, but also I'm not involved at all. Revisionist history tells me that I probably should have taken the game as a sign, turned tail, and ran far, far away.

[2] I'm sorry for making you relive this, Ryan, but if it helps, just think about pushing Jeff into that foul ball, and it will make it marginally better.

[3] Too many factors coming into play. We "ended" their dynasty two years ago, Pop never forgets, the SI Jinx, etc. This series was over before it started.

[4] Season's over, you knew I was good for at least one more LRG reference, and if you didn't, you should have.