In the NBA, what can you buy with $1,234,320? It turns out you can buy an efficient scorer, a tenacious, above average defender, and an "X" factor in a playoff series.. Otherwise known as one Quincy Pondexter.

Entering Game 6 of the first round series with the Los Angeles Clippers, who would have thought Quincy Pondexter would make the biggest impact off the bench in the Grizzlies three wins in Games 3, 4, and 5? I sure didn't, at least not the way it has happened. This article easily could have been written about Zach Randolph because, for me, the change in the series starts and ends with him. However, Pondexter has been the Grizzlies best bench player in the series thus far. The Grizzlies have struggled to get consistent performances out of all their bench players in the series, but Pondexter has added the most value, not to mention in crucial moments.

If the Grizzlies are going to advance deep into the playoffs, they are going to need Pondexter to continue to step up and be a stabilizing force off the bench like he has against the Clippers. It's time to breakdown how and why Pondexter has been so significant to the Grizzlies playoff success through five games, so without further ado and in the words of Rihanna, let's Pon(dexter) de replay.

The first thing that sticks out when watching film and checking box scores is Pondexter's significant uptick in minutes from the beginning of the series to now. Below is a breakdown of Pondexter's minutes on a game to game basis.

Although the wins in Games 3, 4, and 5 can majorly be attributed to Randolph playing like an absolute ox, QPon's impact shouldn't be overlooked. All three games in which Pondexter played at least 20 minutes, the Grizzlies won. The follow up question after reading Pondexter's minutes is certainly if the increased minutes are significant in terms of the Grizzlies performance or is it just a coincidence that the Grizzlies won when he played more minutes?

To begin to make sense of this, attempt to get in the head of Coach Lionel Hollins. Why would he all of a sudden decide to increase Pondexter's minutes after Games 1 and 2? First and foremost, something obviously had to be changed after Games 1 and 2. Although Game 2 was much closer in terms of score, the Clippers held complete control for the majority of both games. The Grizzlies bench simply didn't get the job done in Games 1 and 2, and Hollins adjusted accordingly.

The first thing that stands out in the chart above is that the total bench minutes decreased after a dreadful Game 1. Consider it a punishment of sorts. The bench was not getting the job done, and Hollins knows his starting five can hang with any team in the NBA. Naturally, Hollins' answer was to have his starters shoulder even bigger minute loads than they already were.

Furthermore, Coach Hollins did not just take minutes away from the bench. He also allocated bench minutes differently after the first two games of the series. For example, Pondexter's minutes skyrocketed, Bayless' and Davis' minutes dropped significantly, and Leuer and Daye's minutes became nonexistent. Bayless saw a dip in minutes for his horrendous defense, which has been well documented throughout the season. He could not do a sufficient job on the likes of Chris Paul, Jamal Crawford, Chauncey Billups, and Eric Bledsoe to justify giving him the type of minutes he got in Game 1. Bayless' minutes had to be transferred to someone who could play a semblance of good defense on the Clippers offensively talented group of guards. That's why Hollins shifted the bulk of Bayless' minutes to Pondexter.

Beginning with offense, Pondexter's contribution has been odd considering what he is known for. He is known to be a corner three point specialist, and he proved that the title is justified in the regular season. However, in the playoffs, he has contributed in a shockingly different fashion on the offensive end of the floor. Although he has only shot six corner threes total, he has only hit one. Going forward in the playoffs, he will have to begin knocking that shot down consistently again. The Grizzlies floor spacing and chances to advance in the playoffs would certainly be better off if he would resume his regular season ways. 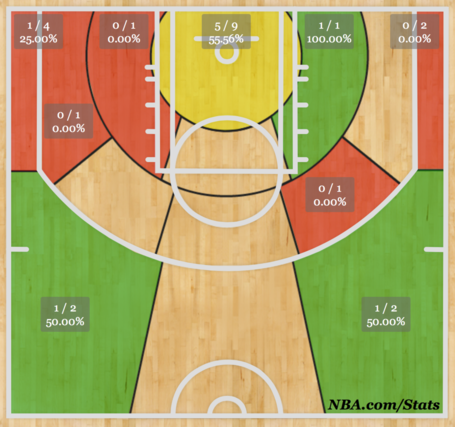 Another area on the offensive end of the floor from which Pondexter has made a significant contribution in the playoffs is in the paint. This is not nearly as surprising as his above the break three point numbers. Pondexter shot 54.81% from around the basket during the regular season, putting him around the league average. As is shown in the shot chart above, this trend has continued into the playoffs where he is 5/9 from around the basket, or 55.56%. Two crucial plays in the series came from Pondexter in Game 3 on and ones at the rim. Pondexter provided the offensive spark the Grizzlies needed off the bench in Games 3 and 4, posting 13 and 10 points respectively.

At times in the playoffs, Pondexter can be frustrating to watch on offense. He has done a lot of standing in the corner waiting on things to happen around him. The Grizzlies should look to be proactive and set down screens for him to try to free him up on runs from corner to corner. While the Grizzlies will need his scoring contributions going forward in the playoffs, his biggest impact in this series has been on the other end of the court.

Not only is Pondexter an efficient scorer from the field, but he also adds above average defense to boot. However, a quick glance at defensive ratings will tell a different narrative. Memphis points allowed per 100 possessions jumps almost six points when Pondexter is on the floor. However, his running mates have to be figured in as well. Pondexter is not typically on the court at the same time with the majority of the the Grizzlies starting lineup, which has posted an astonishing 94.0 defensive rating. That is almost historically good folks. Of all the bench players, otherwise known as the people Pondexter shares the court with, Pondexter has the best defensive rating of the bunch at 101.5. (Players must have played a minimum of 10 minutes during the series for their defensive rating to be considered. Sorry Tony Wroten.)

Pondexter's unfavorable defensive stats are proof that stats can't always be trusted as a standalone tool when evaluating the game of basketball. Each player must pass the eye test as well. While Pondexter's defense might look subpar on paper, at least by Grizzlies standards, he has certainly proven capable of guarding the likes of Chris Paul and Jamal Crawford, at least in short spurts. No, Pondexter probably could not contain Paul for twenty-plus minutes a game, but not many players can. Here below, you'll see how Pondexter's ability to fight over screens, his quickness, and his size help him contain the dynamic Crawford on a regular basis.

Pondexter has physical tools that make him extremely versatile on defense. He possesses the quickness of a guard, and at 6'7" with a 7'0" wingspan, he has the length of a forward which can make him a nightmare for opposing guards, especially smaller ones like Paul. Hollins decided to utilize Pondexter's length not only by putting him on guards, but also by having him deny Paul the ball the full length of the court, which started in Game 3. It has worked exactly as Hollins planned several times during the course of the series, this time in Game 3. Any time the Grizzlies can go a whole defensive possession without Paul touching the ball is a win for them. For an example, check out the play below.

Another element of Pondexter's defensive prowess is his sheer ability to be disruptive. Pondexter's size and length make it incredibly difficult for guards to make entry passes to big men in the post, and those things also allow him to jump passing lanes with ease. The play below from Game 5 is a prime example of how Pondexter can be a disruptive off-ball defender.

While the Grizzlies did not capitalize off of the turnover, it did lead to a wide open three that Bayless could not knock down. The Grizzlies must continue to force turnovers like this one and take advantage of every opportunity that presents itself against the Clippers. Pondexter will play a huge part in that.

There is no doubt that the Grizzlies starters have been absolutely phenomenal in this series, but Quincy Pondexter has done more than his part by carrying the bench at times both offensively and defensively. If the Grizzlies are to go on and win the series, Pondexter deserves a large amount of credit for that feat. In Games 1 and 2, the Grizzlies seemingly had no answer for the Clippers guard play. Things changed in Game 3 when Hollins realized the defensive gem he had in Pondexter.

As you all know, nobody will ever let you forget that the Grizzlies are a small market team. Embrace it. And better yet, go ahead and shove it in people's face that the Grizzlies best bench player thus far in the playoffs is only due to make $1,234,320 this season. I'm sure the Grizzlies will have no problem paying that given Pondexter's playoff contributions.