Are the Grizzlies really that bad at defending the pick and roll, or was something else at play in the Western Conference Finals? The Grizzlies could not handle Tony Parker or Popovich's pick & roll wrinkles, and it showed.

The Memphis Grizzlies thrashing at the hands of the San Antonio Spurs is over, and now the Grizzlies can finally wake up from their nightmare. Wait, this wasn't a Gatorade commercial? That series actually happened? That's how the Grizzlies players must feel right now when involuntarily replaying every bad defensive breakdown over and over in their heads. The entire Spurs series had to feel like an out of body experience for the Grizzlies. This team is not used to being overmatched on defense. It rarely happened in 82 regular season games as well as in the first two rounds of the Playoffs against two very good teams in the Clippers and the Thunder. The Spurs were clearly playing chess, while the Grizzlies were playing checkers.
With all that said, not all bad things have to come out of the Grizzlies sweep in the Western Conference Finals. If the Grizzlies organization is a smart one, and it is, then the coaching staff and the players will spend innumerable hours breaking down film from all four games to learn from Spurs Coach Greg Popovich and his savvy veteran group of players that he is privileged to coach. Do not let the caliber of players he is coaching take anything away from Pop though. The man is brilliant. If ever there was a master of his craft, it is Popovich. As stated previously, people just don't do to the Grizzlies what the Spurs did to them.

Can Mike Conley model his game after Tony Parker? 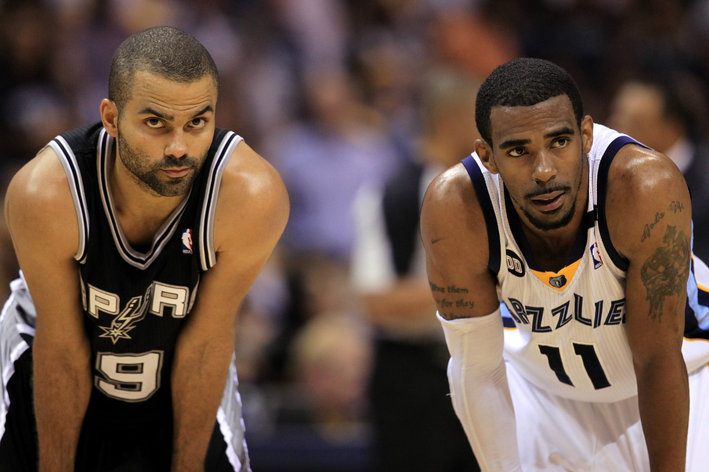 In the Western Conference Finals, the Spurs ran a large amount of pick & roll sets as demonstrated in the tables directly above and below. As you can see, the numbers tell you the Spurs hurt the Grizzlies more with the pick and roll in Games 3 and 4 than in Games 1 and 2. But numbers can be deceiving. The Grizzlies were really hurt in Games 1 and 2 by spot up opportunities, but those opportunities were often created by some variety of the pick & roll.

In the first clip, the Spurs use three screens, one back screen and two down screens, to try to free Tony Parker from Jerryd Bayless, but Bayless does a surprisingly good job fighting through screens and sticking with Parker on this play. Then Parker creates enough space with a little bit of a push off to be able to receive the ball again at the top of the key. As the Spurs often do with the play clock down around ten seconds, they go to their bread and butter play, the pick and roll. Here is where the Grizzlies defense begins to break down. Boris Diaw comes up to set a quick pick on Bayless. Bayless shows poor defensive awareness by not recognizing that the screen was coming, thus when Parker uses the pick and drives to the rim, Bayless gets stuck on the pick. Zach Randolph also does a poor job of guessing which side of the screen Parker will come off of, and he fails to step out and hedge to block Parker's clear path to the basket. After Parker eludes both Randolph and Bayless and gets into the paint, the other three Grizzlies completely forget what help defense is, letting Parker complete an easy layup. Help defense, often one of the Grizzlies greatest defensive strengths, was one of the team's biggest problems in this series. They looked confused on their rotations, and as a result, played porous defense for the bulk of the series.

The next play really exhibits the Grizzlies main problem on defense during the series, which was Parker's passing ability. Parker is a master at understanding what the defense will do and knowing how to break a defense down. It is incredibly hard to defend the pick and roll when you have to deal with a point guard that is so multidimensional. Don't hedge hard enough and Parker will come off the pick and either shoot a jumper or drive to the rim for an easy bucket. Hedge too hard and Parker will make a beautiful pass right over the outstretched arms of defenders to a wide open big man. This is exactly what Parker did on the play below. Parker came off of Duncan's screen and lured his defender and Gasol, Duncan's defender, far enough away from Duncan that a quick pass back to the future Hall of Famer would create a wide open jump shot for him. Quincy Pondexter's close out on Duncan also didn't help. I'm not even sure that can be called a close out.

The next play shows off not only Parker's passing ability but also his uncanny ability to change speeds and direction on a dime to free himself from his defender. In this play, Parker uses a Thiago Splitter pick and changes direction several times until Conley is caught slightly off guard, and then he puts hit into high gear, bursts forward towards the paint, and uses his nifty passing skills to dump the ball off to Splitter for an easy layup. The Grizzlies actually didn't play terrible defense on this play. It's just that Parker's elite passing was too much for even the Grizzlies to handle at times, especially on the pick & roll.

You know those long twos that are considered some of the lowest percentage shots in basketball? Well Parker was not only taking those, but he was making them as well. There is not much the Grizzlies could do when Parker's shot was falling. It gave the Spurs another dimension. Honestly, the best the Grizzlies could hope for was Parker shooting jumpers on the pick & roll. Parker just showed why he is one of the best point guards in the game in this series. On the play below, Randolph steps out to ice Parker and stop his dribble coming off the pick, but he fails to stay long enough to cut off Parker's dribble or to allow Conley to recover to contest Parker's jumper. Being just one second late to Parker meant he made the defense pay in this series.

One of the Spurs best wrinkles in the pick & roll that confused the Grizzlies all series were stagger screens. In the play below, you will see both Duncan and Splitter sprint to the top of the key to set two screens slightly apart from each other, otherwise known as stagger screens, before moving in different directions to give Parker several options. First, Splitter rolls to the basket to post up down low. Duncan slips right out to the elbow and readies himself to receive the ball for a jump shot. As stated previously, this gives Parker several options. If Duncan's defender, Gasol, comes out to block Parker's path to the basket, Parker could toss the ball right back to Duncan after he fades down to the elbow for an open jumper. Next, say Gasol stays home on Duncan opening up a drive for Parker. If Splitter's man, Randolph, comes out to cut off the drive, then Parker could dump the ball off to Splitter for a dunk. Another option would be for Parker to kick it out to Kawhi Leonard in the corner if Prince were to help to cut off the drive. The last option would just be for Parker to drive to the rim and try to shoot a layup.

I know this description can be confusing, but just watch the video several times and you'll see the genius of Greg Popovich to always give his point guard multiple options. On this play, Parker chooses the pass to Duncan option because Gasol helps off of him to try to cut off Parker's drive. Parker kicks it to Duncan, and by the time he releases the shot Gasol is too late to contest. The Spurs ran a number of pick & roll plays with stagger screens in this series, and the Grizzlies defense was confused about who needed to switch or rotate frequently, which is exactly the point of stagger screens.

There are other factors at play that caused the Grizzlies to get swept, but the Spurs pick & roll offense has to be near the top of the list. The Spurs spaced the floor properly, Parker showed that he is an absolute maestro with the ball in his hands, and savvy big men moved right into open spaces on the floor at the right times to make the pick & roll the Grizzlies kryptonite in the Western Conference Finals.