GBB kicks off the offseason with a series of graded analyses. We will be looking at everyone that suited up in a Grizzlies uniform this season as well as the coach, front office and even the fans.

For all seasonal comparisons I'll be referring back to the last time he played before this season, in 2010-2011

You know those little collapsible toy dolls? They're usually buff and muscley-looking, with rounded, bulging arms and legs. But with one tender press of the finger the whole thing loses form and falls apart in your hand. Keep that in mind when reading this evaluation.

This ends up being one of the more disappointing grades to give out this year. Darrell was coming into this season with high hopes of bouncing back from a torn achilles tendon he suffered in practice before the 2011-12 season. Bless the little Jayhawk's heart, because I honestly believe DA gave it everything he had after missing the first three weeks of the season with a stress fracture he suffered in a pickup game before this season. It just never quite came together for him, and his skill set was relegated to something that resembled a confused, meek-minded Euro league tweener for much of the year.

Statistically, if you look at DA's game log you can see a really solid month of January sandwiched by the initial burdens of his comeback in Nov/Dec, the February acquisition of Ed Davis and his early March impression of the Mad Men theme song in Orlando that left him a defused shell of his once explosive form (remember that doll?). Aside from the decrease in rebounding (2.9 RPG down from 4.3RPG in '10), you can also see the effect of his injuries in his shooting percentage, with a respective 45% down from 50%. If we look at the shot charts you can see exactly how DA was off his type of game this season. 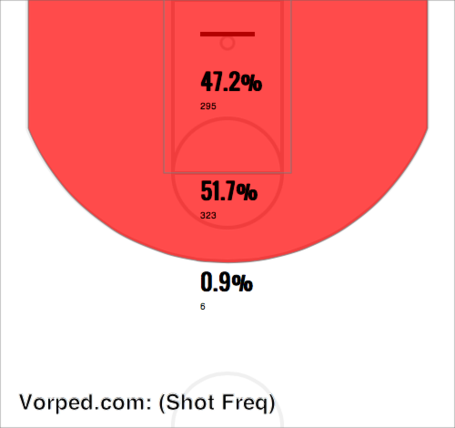 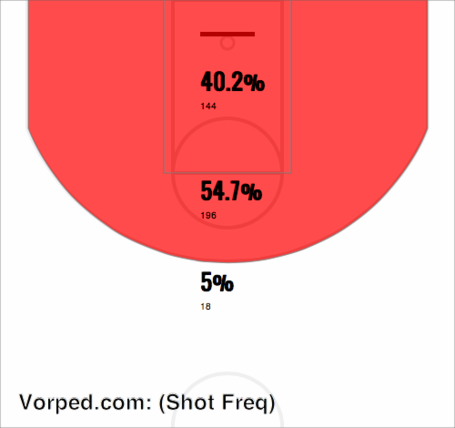 DA went from having nearly half (47.2%) of all his attempts coming from the paint to relying on perimeter shooting nearly 60% of the time this season. And because he's outside the paint more often, he's unable to get the same offensive rebounds and put-backs we were accustomed to seeing. It also means he's not getting to the foul line nearly as often, which is why I can disregard the drop in his FT% this year due to an insufficient sample size (46 attempted compared to 134 in 2010-11).

Arthur's lack of explosiveness became even more evident in the playoffs, if by nothing else than just a visual standpoint, when he suddenly became the only option off the bench at PF and C*. He got outmuscled and he never seemed to get position on anyone down low. No momentum swinging dunks, no improbable clutch offensive rebounds, no furious swats of in-lane floaters. If you take out Game 3 vs the Clippers and Game 4 vs the Spurs, DA averaged 2.0 RPG during the playoffs; that works out to 1 rebound every 5:23 minutes in those same games. That's not going to cut it as a backup PF/C. Although he often looked lost on offense, and in spite of only taking 8 shots in the paint during the OKC and SAS series, he shot 47% during the playoffs, which I mostly attribute to uncontested attempts near the top of the key.

*?! after Game 1 v LAC where Ed Davis goes for 6pts and 6rebs in 13 min on 3/4 shooting with zero fouls, he plays a total of 35 more minutes in the rest of the playoffs? We'll save it for the Hollins post.

But what we missed most about that 2011 playoff beast (specifically against the Spurs) was his relentless and contagious defense. In the two playoff series of 2011 (13 games), DA totaled 12 blocked shots and 7 steals. This year, in three series (15 games) he had a paltry 4 blocks and 2 steals. That a beast does not make.

DA's future here in Memphis is now looking murky. He's got loads of talent, but ever since his Kansas days he's had injury after injury to derail his development (ya you guessed it, Darrell's the collapsible doll from earlier). He's a Lionel Hollins guy, and, until we know Lionel's future, DA will be one of those players whose return is totally up in the air. He's a guy whose energy and mindset fits the Grit n Grind of Memphis, but how many times can you roll the dice on his health status?

When it came to final grading I had to give Darrell a small slide of the scale because of how difficult it can be to come back from Achilles tendon tears. However, if there are no moral victories in basketball then your effort can only take you so far in the fiery eyes of Faulkner judgment.

*Grizznosity - one's overall impact and representation of the Griz based on off court contributions, cultural influence, leadership, and memorable moments that comprised the 2012-13 season.