I got some of the GBB gang together via email to discuss the happenings of last night.

1. The Grizzlies traded Darrell Arthur and the 55th pick to Denver for Kosta Koufos. How much better does this move make the Grizzlies?

Kevin Lipe: I think this move immediately makes the Grizzlies better. For years, every second Marc Gasol has spent off the court have been seconds that the Grizzlies hovered on the edge of collapse—or, in lots of cases, they flew right over the edge and started immediately sucking. With Kosta Koufos on the team, Marc Gasol shouldn’t have to play 40 minutes a night anymore. It’ll be the best thing that ever happened to Marc Gasol. He’s probably throwing a Koufos party in Barcelona with Pau right now.

Keith Edwards: Significantly. I’ll make no bones about how much I love DA, and will miss him greatly, but even I was able to immediately see how much better this makes our team. Darrell is always hurt. Always. And while he tries to gut it out and play through it at times, the fact of the matter is, he was very ineffective trying to do that. Kosta Koufos is a starting caliber center, and he will be able to give Marc consistent rest throughout the season. He’s going to grab a ton of rebounds, and won’t miss chippy’s (chippies?) when he gets them. And foul. A lot.

Matt Hrdlicka: Difficult to quantify in terms of wins. There is a chance that the front court shuffling is not complete, but as things stand the Grizzlies are clearly more capable of matching last year’s win total than they were 24 hours ago. If the Grizzlies had a 54.5 win total for next year, I’d probably still go under, but that has more to do with the competitiveness in their division than anything else.

I love DA. He was a part of my favorite play in Grizzlies history. Watch some of DA’s highlights from 2011. He was a gazelle. Unfortunately, that is not the case today.

I will miss Arthur so much but his departure was completely necessary.

Ryan Hoover: I will miss Arthur so much but his departure was completely necessary. It thoroughly pleases me that in return the Grizzlies landed a top notch back up center. Koufos was one of those guys I always dreaded seeing on the court. He’s large, energetic and fits in this current defensive set perfectly as Marc’s replacement. Initially thought DA could be used to sweeten a Prince deal, but this is just as good.

Andrew Ford: I don’t know how much better this makes the Grizzlies in terms of "is this the piece that finally pushes them to the NBA Finals", but he makes our second unit immeasurably better. Koufos is a strong post man, which is something the Grizzlies have not had to spell post bullies Marc Gasol and Zach Randolph in recent years.

One thing people like to talk about a lot with the Grizzlies is how other teams’ benches kill ours. That was usually true in recent years, and it likely still will be true. I don’t think Koufos solves all of our bench’s production problems, but his addition certainly goes a long way. I love this trade. Koufos fits with the Grizzlies so well. He’s a high-energy guy that fights hard on every possession that just so happens to be a skilled big man as well. What else do you need to know?

Chris Faulkner: It balances the roster (pre-FA) a lot better. We now have a legitimate and actual backup center, and the backup PF spot is simplified a bit with DA out of the rotation (and no longer has to inefficiently spell Marc Gasol).

2. Did the Grizzlies do the right thing by drafting Jamaal Franklin instead of a shooter?

Kevin Lipe: I dunno. I understand that in the second round, it’s probably smarter to take the best player available, but this Griz team—as currently constructed, anyway; the Tony Allen and Zach Randolph era—doesn’t have a long window. The Gasol/Conley era, on the other hand, has only just begun. If you’re trying to win a championship with TA and Z-Bo, I’m not sure how Franklin is very useful short-term except as a trade piece. Long-term, he might be Tony Allen with better offense at the rim. We’ll just have to see.

Keith Edwards: Let’s be honest, did any of us really think that we’d be getting someone who could contribute right away in the middle of the second round? Jamaal Franklin was the best available talent. I’d much rather go after a proven shooter and not draft a rookie hoping he can do the job. Most importantly though, Franklin is an athlete, something the Grizzlies have very few of, and he will be able to spend time in the D-League to develop his jumper. I like this pick. I wanted Ledo, but from my understanding, Franklin was the guy Memphis was trying to move up to get. I believe Franklin will blossom into a really good player. 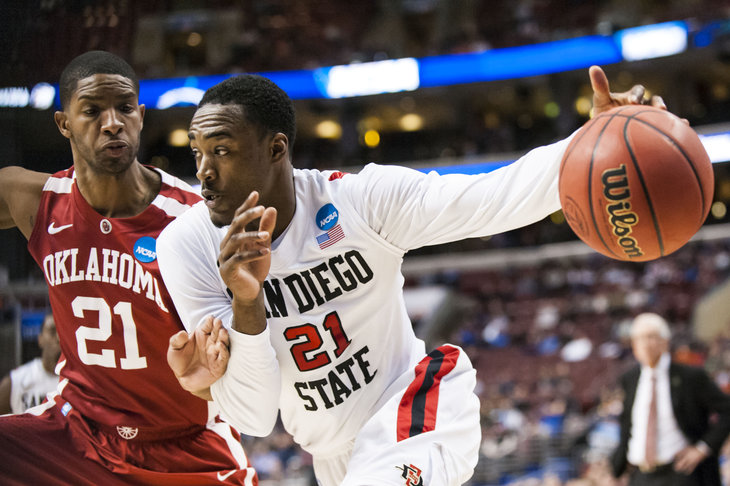 Andrew Ford takes an in-depth look at the Grizzlies' second round pick.

Matt Hrdlicka: I don’t watch college basketball, but I think it is a mistake to draft for need in just about every circumstance. Rookies so rarely come in with a competent 3 pt shot that it is difficult to find a "shooter" with a lottery pick, let alone in the middle of round 2.

Ryan Hoover: Think of the best outside shooters in the league. I think of 2 recent examples that came into the league and had an immediate impact for his team: Klay Thompson and Stephen Curry. In what was a rebuilding team, Curry and Thompson maintained their college roles as primary scorers. Even as highly rated prospects, they are pure anomaly. College-touted shooters are the stars of their team but most are drafted into role player situations. Those players must adjust to become a professional shooter.

It took arguably the best shooter in college history, JJ Redick, a few years to find his professional stroke, and while a project seems great for the future, the FO can’t neglect the competitive window in which the Grizzlies find themselves. They must acquire professional shooter to take them to the next level. I love the Franklin pick because he was the best available player and Memphis didn’t select a rookie to be our "shooting savior." Also think of the potential of a Wroten-Franklin combo off the bench. Explosive.

Andrew Ford: It’s still very early, but my initial reaction is I hate this pick. Now, I know hate is a strong word. My disdain for the pick really has nothing to do with Franklin’s game. I think he will be a great asset to the Grizzlies for a lot of years to come.

My problem is with the fact that I don’t see how he helps the Grizzlies get any closer to a championship while the team is "in its window" so to speak. I’ve seen a lot of people justify the pick by saying something along the lines of "It’s tough to find consistent shooting in the second round." Yes, it is tough, but it can be done. Just look at the draft two years ago when Chandler Parsons (Pick 38) and Isaiah Thomas (Pick 60) stepped in and were able to shoot the ball well and at a high percentage right out of the gates. I know you can’t draft based solely based on need during the draft, but don’t tell me Erick Green and Ricky Ledo, two guys that can really score and shoot the ball from deep, wouldn’t have been great value for the Grizzlies at pick 41 when they were both projected by many as first-rounders.

What I see Franklin as currently is really cheap insurance in case something happens to Tony Allen. Last thing: I can see comparing Franklin to Tony Allen and Kawhi Leonard on the defensive end, but comparing him to Leonard anywhere else is just a lazy comparison made because they went to the same school. They have very different skill-sets and personalities, and despite stats, Leonard was a much more polished shooter coming out of college. Again, I like Franklin as a player, and I think he has a bright future. I just didn’t like the pick for the present. Maybe that’s short-sided. Who knows? Only time will tell.

Chris Faulkner: I’m a strong supporter of Best-Player-Available, especially in basketball. Collecting young assets is never a bad thing, and you never know what could become of a player with a high ceiling. With Bayless picking up his option today, we’re not in position where we have to go sign 3–4 perimeter shooters.

3. In five words, sum up your feelings on Janis Timma.

Keith Edwards: …..you are not James Southerland.

Chris Faulkner: He was the last pick.