Grizzlies Summer League: What We Know About Tony Wroten

We had such high hopes for Tony Wroten. Now that Summer League is mercifully over, many Grizzlies fans are left to wonder: where did all the promise go?

Share All sharing options for: Grizzlies Summer League: What We Know About Tony Wroten

I come neither to bury Tony Wroten, nor to praise him. I come merely to ask everyone to think a little bit slower. As the youngest player on the team, with obvious athletic pedigree, Wroten has often been held up as the talisman for the Grizzlies' roster improvement. In many ways, these expectations have colored the idea of what Wroten is, and what he "should be."

In general though, progress is slow, far slower than a 24 hour news cycle's patience. Our access to information outstrips our ability to process and properly weigh it. The simple availability of Summer League games lends it some importance. After all, if Summer League meant nothing, then why would they put it on TV? And more importantly, if Summer League meant nothing, then wouldn't that make me a loser for watching every second of a meaningless sporting event, by the end of which I may or may not have talked myself into Jack Cooley possibly being good?

There is a ton of information out there. Much of it is noise. What's worse, we are terrible at discerning what means something and what means nothing (this, of course, includes me, but almost definitely does not include Nate Silver, whose book "The Signal and the Noise" lends great insight into the many ways we think we're better at predicting the future than we really are). We are compelled to accelerate our opinions to match the velocity at which new facts bombard us. And, frankly, having an emotional connection to a sports team does no favors to looking at things with an unbiased eye.

Here is what we know about Tony Wroten: we know nothing. 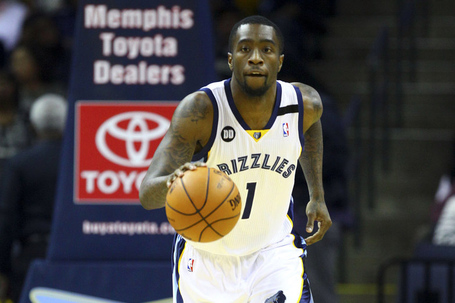 "It doesn't mean anything if a guy looks great in Summer League. But if he looks terrible, it means something." While there is probably some general validity to this rule, it is far from universal. More than anything, it sounds nice and happens to gel with recent Grizzlies historyso easily it can't be unproven by a cursory memory check (who will forget Hasheem "Memphis is hotter than Africa" Thabeet). Unfortunately, this is exactly the kind of easy, reductive narrative that gets us into trouble.

We all remember Hasheem Thabeet struggling. We were all angry. Most guys that struggle in Summer League are bums anyway. But if you were to go allll the way back to last year's Summer League stats, you'd find two players who bucked that rule. Draymond Green and Festus Ezeli were both pitiful last year in Summer League (okay, so Ezeli may just be pitiful), but it didn't stop either from being contributors to a Warriors team that was pretty darn good last year.

More problematic to this narrative: Wroten was actually decent in 2012 Summer League, scoring 13.2 PPG on 40% shooting. But it is so easy to discard that data as meaningless, and replace it with the far more meaningful data set we were just forced to sit through. As I watched Summer League, I found myself getting a little ticked at Wroten. After all, he was really the only reason I sat through such terrible basketball. I just wanted to see him do something cool. In fact, every time he touched the ball I said, "Do something cool," which is really the extent of my coaching acumen.

Wroten may never become a rotation level player (he was not one last year). But his performance in a handful of Summer League games will have little to do with whether that happens or not.

The Sample Size Problem - As mentioned before, we are generally bad at understanding when a sample size becomes meaningful. In NBA history, only 63 guards have played a full season in the NBA before their 21st birthday. Of those 63 guards, only 10 played fewer minutes than Wroten's 272 last year. 272 minutes is not an NBA season. It's not even a quarter of a season. For some sample size fun, in his rookie year LeBron James passed 272 minutes midway through his 7th game. If you had cut LeBron's season off at the 272 minute mark, he would've shot somewhere around 47% which is fantastic... Except he shot 41.7% for the entire season. If there was a 5% margin of error in James's FG% in just 272 minutes, (and James is a player who feasts on open court dunks like no one since a young Karl Malone), might there be a little noise in Wroten's FG%?

Obviously, the point of this exercise is not to compare Wroten to the best player the NBA has seen in a generation. Far from it. Wroten's inability to gain playing time is partly his fault. Other factors (namely a deep roster, a team fighting for playoff seeding, and a coach that hates mistakes) conspired to keep him mired on the bench.

Still, there is an awful lot of noise to sift through in just 272 minutes of play. Small sample size cuts three ways:

1). There is less information upon which to form an opinion.

2). Since there are fewer data points, we place added emphasis on each one. Don't believe me? There are people out there that think Tony Wroten is an NBA player because of this one game:

3). Most importantly, the best way for an NBA player to get better is to, you know, actually play NBA games.

The Front Office Has Soured on Wroten - It is fair to question Wroten's "fit" on a Grizzlies team that drafted Jamaal Franklin and traded for Nick Calathes. However, don't take either as more circumstantial evidence against Tony Wroten the NBA player. Are the Grizzlies supposed to avoid acquiring players they think have a chance to be good just because they already have a guy at the same position who has a chance to be good? The search for good basketball players never stops. The search for young players who can outperform their contracts never stops. Tony Wroten can still be one of those guys.

The NBA is a Man's League - Let's revisit that list of 63 baby guards. Only 13 of them registered even a league average PER before their 21st birthday. Only 2 of them did it while still a teenager.

It would be a historic achievement if Wroten became even a league average guard next year.

The NBA is not kind to kids. It is downright brutal to kids who can't shoot.

The NBA is not kind to kids. It is downright brutal to kids who can't shoot. Only one player (Russell Westbrook) became a league average guard before his 21st birthday while shooting worse than 40% from the field.

Grizz fans know this. We watched Mike Conley struggle mightily as a young NBA point guard. He didn't post a league average PER until his 4th season in the league. Thankfully, the Grizzlies don't need Wroten to become a league average guard. They just need him to develop an effective NBA skill which brings us to... 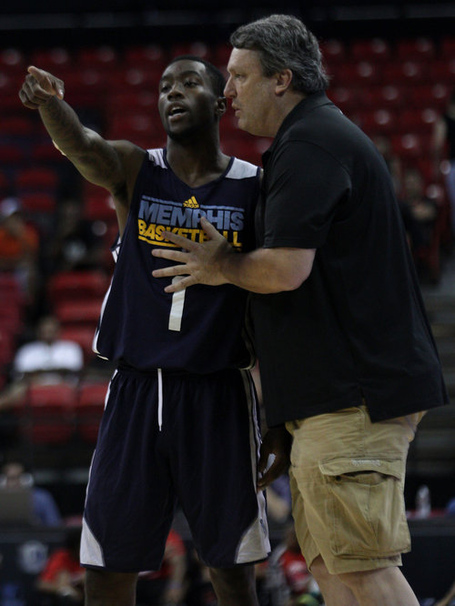 The quickest path to Tony Wroten as an effective NBA player - Let's be clear. Wroten has a lot to work on. He was not good last year. When people talk about what Wroten needs to improve, his jump shot is the recurring theme, probably because it is the most obviously broken part of his game. However, hoping Wroten develops a jump shot is probably wishful thinking. He's consistently off balance; his legs flail forward; it's less than a thing of beauty. Wroten shot just 37.5% from mid-range last year.

I'd argue that Wroten's jump shot is actually pretty far down the list of skills that need improving. You buy a Ferrari to drive fast. You draft a 6'5" 205 lb guard to get to the rim and make stuff happen.

Wroten's got the first part figured out - nearly 73% of his FG attempts occurred at the rim during his rookie season. This is fantastic for a player who lacks the threat of a jump shot to keep the defense honest. Unfortunately, he was pretty bad at finishing. He shot just 41.9% at the rim. At the rim.

Jimmer Fredette, far from a dynamic athlete, shot better at the rim last year than Tony Wroten. Heck, The Jimmer almost shot better from 3 pt range than Wroten did at the rim. Grizz fans go nuts every time Tony Allen misses a layup, but even he finishes better than half the time at the rim.

Some have alluded to Tony Wroten's best case scenario as Rajon Rondo. Rondo leaps to mind as another rangy point guard who would prefer to dish and selectively pick his spots on offense. For Wroten to even sniff that rarefied air, he must finish at the rim. Rondo - over the past 3 years - has shot better than 53% at the rim. It is simply not possible to be an effective offensive player if you cannot make a jump shot OR a layup.

If Wroten can finish at even a 50% clip it would be a boon to his horrific shooting percentage, and his overall effectiveness. Perhaps instead of Rajon Rondo, we should start thinking of Wroten's best case scenario as Tyreke Evans - a player who still struggles to make the correct basketball play, but has a place in the league because he gets to the rim at will. Or perhaps he could become Kyle Lowry, a player that gets to the rim with reckless abandon, generates free throws, and channels his competitiveness into elite level defense.

Wroten is far from either of those players now. That doesn't mean he can't develop a portion of their skill set in the next year or so. A ton of work stands in his way, which is different than the lack of opportunity he has dealt with so far. He not only must improve his jump shot, but also his attentiveness on defense and overall understanding of the game. Also, for a player with so much to work on, the rumblings about his less than stellar work ethic are probably the least encouraging facet of this whole question.

Still, Tony Wroten is just 20 years old. I, for one, had an unparalleled work ethic when I was 20, but then again I never had a coach replace me with a guy who sat on his couch for 90% of the season.

All of this is to say, don't give in to a narrative constructed on less than 300 NBA minutes and 8 Summer League games. We know nothing. At least not yet.