Beyond Free Agency: Trade for a Shooter

With the Free Agency market drying up, let's take a look at least one shooter who should be available for cheap in the trade market.

Share All sharing options for: Beyond Free Agency: Trade for a Shooter

It can be frustrating to watch the NBA free agency frenzy. I know Grizzlies fans have spent the past week watching the Clippers add weapons, the Rockets add a superstar, and the Pelicans improve to a 38 win team in the worst year to be a 38 win team in a decade. In general, however, free agency is probably the least efficient way for a team to improve. Often times, to attract a new player, a team must overpay (I'm looking at you Jose Calderon and O.J. Mayo) to convince a player to sign with them. It is far tougher to sign a player - like the forever-underappreciated Paul Milsapp (and to a lesser extent, Devin Harris) - to a contract that they are likely to outperform.

Thankfully though, Free Agency is not the only tool in the Grizzlies arsenal to acquire new talent. Frankly, it was highly unlikely that any player the Grizzlies could have realistically signed this offseason would have moved the needle far in the win column. There are still nice shooters available - Gary Neal for one - but Grizz fans should turn their attention to the trade market for marked improvement.

Thanks to the money clearing Speights, Ellington, and Rudy deals last year, the Grizzlies have a number of trade exceptions with which they can absorb a contract while sending nothing back. The expiring contract of Jerryd Bayless is a nice piece too. And, believe it or not, even the two year Tayshaun Prince contract may be tradable to the right team. So many teams are already "Riggin' for Wiggins", and taking a 2 year Tayshaun Prince deal to clear the longer contract of a more productive player may be the difference between a top 10 pick and a top 5 pick.

In this post, I will focus on a player I think can be had for super-cheap - perhaps nothing. This player, despite being just 24 years old and a former top 10 pick, saw a reduced role last year. What's worse, his team has already brought in another player to play ahead of him. To add to the confusion, this player has actually shown the across-the-board improvement you would expect from year 1 to year 2, and still has areas where he can improve in the future.

So why might he be available? Probably because his name is Jimmer Fredette. 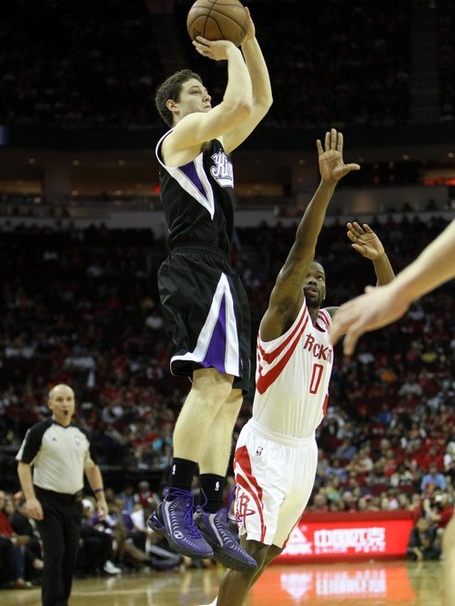 I know quite a few of you are reacting to The Jimmer on the Grizzlies the same way Senator Clay Davis reacts to, well, anything. Some of you are already headed to the comments section to post something nasty (what else are comments sections for?). For the rest of you, know this: since 1988 only 31 players have shot 150 3's in one of their first two seasons while also making more than 41% of them.

The Jimmer is one of them.

Among those 31 names you will find certain Hall of Famers (Steve Nash, Paul Pierce), career marksmen (Michael Redd, Hersey Hawkins), and some also-rans (Eldridge Recasner, Anthony Goldwire, and the once-a-Grizzly Casey Jacobsen). By no means does simply being on this list mean The Jimmer is bound to fulfill the media hype that surrounded him coming out of BYU. All it illustrates is just how hard it is to find a young player who has shown the ability to be an elite shooter.

And The Jimmer was an elite shooter last year, shooting over 41% from deep. Due just $2.5mm next year, with a team option for $3.2mm the following year, he is cheaper than any shooter the Grizzlies could have acquired in Free Agency.

There are other things to like about The Jimmer. For one, his shot distribution is highly encouraging. In each of his first two seasons, just 24.3% of his shots were from mid-range, a ratio below such Free Agents as Mike Dunleavy and JJ Redick. For a Grizzlies comparison, Jerryd Bayless - a player whose expiring contract happens to line up perfectly with The Jimmer's - attempted 42% of his shots from mid-range last year. Fredette actually tries to get to the rim, and that is a great indicator of sustainable FG%. While not a high level finisher, The Jimmer has made some headway in learning how to finish in the paint - his FG% in the paint rose from a dismal 41% as a rookie, to 43.9% in his 2nd year. 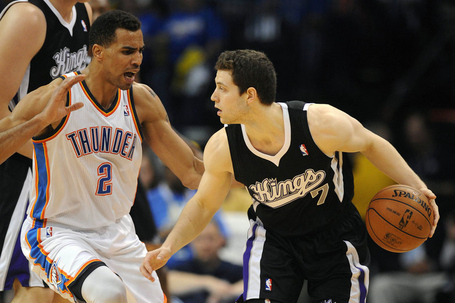 Across the board, Jimmer's per 36 min numbers rose from year 1 to year 2, which says just as much about how bad he was as a rookie as anything else. But I get the sense that he is viewed as a lost cause around the league and, if so, that is probably because he is one of the worst defenders in the entire league.

The Sacramento Kings were not a good defensive team last season, and while it would be a mistake to blame this on The Jimmer, he certainly didn't help the situation. He was tied for the worst defensive efficiency numbers on the Kings. The lineup data for Fredette is spotty: he only appeared in 2 of the top 20 most used 5 man lineups for the Kings last year. However, in those 2 lineups, the Kings performed decently (for them) on the defensive end, and actually outscored their opponent overall.

I'm not trying to sell the idea of Jimmer being even passable as an individual defender. But keep this in mind: the Miami Heat won their second straight title playing Ray Allen, who was essentially an orange cone on defense, significant minutes. It didn't matter. Because Lebron played beside him. JJ Barea may be as bad a defender as The Jimmer; he also won a title 3 years ago. And unless you are the dude from Memento, every Grizzlies fan remembers beating the Clippers in the postseason with Keyon Dooling "guarding" Chris Paul. You can survive with one bad defender, just as you can survive with one bad shooter, if you have elite level players to pick up the slack.

If any team is positioned to cover Jimmer's weaknesses for 6-8 minute stretches, it's the Memphis Grizzlies. And really, that's all the Grizzlies need.