The Grizzlies resigned Leuer this offseason for three years, $3 million. Is the signing about filling out the roster or does Memphis's Front Office actually see something of value in Leuer's game?

When the Grizzlies signed Jon Leuer to a new deal earlier this week for three years, $3 million, the news was met with a neutral reaction by Grizzlies fans. There weren't any people over the moon about resigning him, but there also weren't any people bashing the deal. As a matter of fact, Grizzlies fans really didn't see enough of Leuer to formulate an opinion on his value for the team.

With Darrell Arthur gone, the biggest question surrounding Leuer becomes is he the guy that can seamlessly step in and fill the stretch four role that Arthur played during his Memphis tenure? In other words, is Leuer capable of performing Arthur's role at the same level as Arthur when he was at peak health?

While that is yet to be determined, the Grizzlies front office clearly thinks he has the ability and potential to be a valuable asset to the front court. It's no secret that Grizzlies Vice President of Basketball Operations John Hollinger is a big fan of Leuer, and he certainly had a role in the Grizzlies bringing the Minnesota native back.* Based off a limited sample size, I have to agree with the front office's decision.

To get a better feel for how Leuer can help the Grizzlies going forward more than just filling out their roster, let's first take a look at his offensive game, particularly his shooting. Below is Leuer's shot chart from the 2012-2013 season. Many, myself included, think of Leuer as a pick-and-pop threat. As you can see though, Leuer wasn't very good last season from three traditional pick-and-pop spots, where he was 2/5, 2/9, and 1/3. Despite these numbers, Leuer is still a threat. Defenders know that Leuer can move well for a big man, as most pick-and-pop threats can. They also know, despite these numbers, that he can hurt you from those spots on the floor if left open. 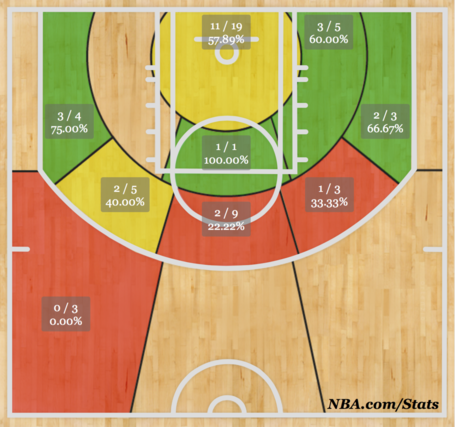 Although Leuer likes to take the bulk of his shots in the three traditional pick-and-pop zones, his shot chart interests me in more ways than looking at those three spots. The spots on the floor that I would like to focus on are the two spots directly in from each corner three, i.e. the spots he went 2/3 and 3/5 from on the right side of the floor and the ones he went 3/4 and 0/0 on the left side.

If Leuer could shoot that well from those spots on the floor with a bigger sample size, he could serve a Udonis Haslem-type role. He is good at slipping, rolling, popping, and fading to find open space on the floor. Also, if he is able to knock down those shots consistently, that makes it harder for his defender to help off him which will free up space for Conley and the other guards to drive into the paint. Check out below what I mean about his craftiness without the ball and his ability to hit that baseline jump shot.

Another place on the floor where Leuer can excel is the painted area. Although he lacks strength, he is an adept finisher around the rim, and he also has some nice footwork that he uses to free himself up for an open shot on occasion. One thing the Grizzlies front office has harped on time and again this offseason is their desire to get quicker and play at a faster pace. Leuer fits in nicely with their new strategy. He runs the floor well, he's smart enough to fill the right lane, and he can finish in transition. Check out some of Leuer's finishes in the paint from the 2012-2013 season. He does a bit of everything; uses his footwork and skill moves to beat a defender, scores in transition, cleans up on the offensive glass, and drives past defenders for a layup. He ended the season shooting nearly 58% in the paint, which is a nice percentage for a below-the-rim player.

Despite Leuer being relegated to the end of the bench for most of his Grizzlies tenure, he was able to score at a high clip this season when he got playing time (12.0 points per 40 minutes). That's exactly the type of production the Grizzlies should look for from Leuer. I certainly believe he is capable, he just needs the minutes to show he can stay afloat and thrive in a particular role in the NBA.

Another key to Leuer's offensive game is he rarely turns the ball over. He will not hurt his team on that end of the floor, which is good since the low-scoring Grizzlies offense can't afford to waste chances.

The two phases of Leuer's game that really need improvement are his defense and rebounding. Leuer rebounds at a very poor rate for his position, and after watching all his rebounds and attempted rebounds from the 2012-2013 season, he doesn't seem to have that killer instinct or knack for where the ball is going to come off the rim. If Leuer is able to work on his positioning, he might become a decent rebounder. He doesn't have to be great, after all Arthur never was, but it would help him if he had another valuable skill to bring to the court besides his mid-range jumper.

As for his defense, he is a hard worker but he lacks strength and lateral quickness. Often times, he stands there flat-footed, which makes it easy for quicker guys to go right around him. However, he does show flashes of defensive ability that would lead you to believe that he can be on the court for extended periods of time without being a defensive liability. For example, in the play below, Leuer gets switched onto a guard, which is a mismatch for him. However, Leuer does a good job staying in front of his man without fouling and gets the block at the end of the play. If he can do that more consistently, he could really have value for the Grizzlies coming off the bench.

Although Leuer had a bit of a sophomore slump and regressed in certain areas, most notably shooting in the paint (His percentage dropped from 73% to 58%), he still played with high efficiency when he was on the court. If Leuer can continue to refine his mid-range game and add one more average to above-average skill to his arsenal, say rebounding, then Leuer will be extremely valuable for the Grizzlies. Even if Leuer continues to play primarily a pick-and-pop roll and not much else, the Grizzlies still made a good decision to bring him back. You can't have enough players on your roster under good contracts.

In Leuer's third season in the league, it will be interesting to see what adjustments he's made and if he has staying power in the NBA. Dave Joerger should help his development and will be able to continue to nurture him on the defensive end of the floor. Also, Joerger seems like a coach that will release the reigns a bit on his players, which is exactly the type of coach Leuer needs to thrive. Whether he is able to step up and earn a spot in the rotation remains to be seen. One thing that's certain; It's time for Leuer to earn his paycheck. With his skill set and due only $1 million this year, that should be no problem for him.