Miller had several suitors, but in the end Memphis fit the bill better than the rest.

Share All sharing options for: Mike Miller: The Prodigal Shooter Returns to Memphis

Let me be the 10,579th Grizzlies fan to welcome Mike Miller back to Memphis! The Grizzlies got their shooter. WOOOOOO!!!!!!!!!

The Grizzlies signing Mike Miller is, in a word, a coup. In the strange world of amnestied NBA players, the Grizzlies didn't have to outbid other teams for Miller's services (Miller was guaranteed his roughly $6mm Miami salary no matter where he signed). Miller chose to sign in Memphis over other championship contenders because it was the best situation for him. More on this later. 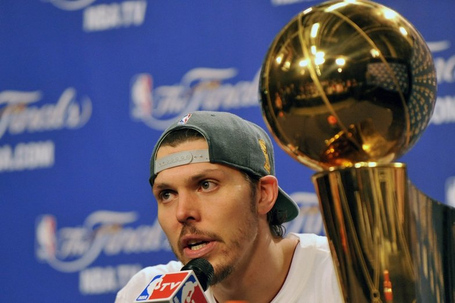 Miller's health - Mike Miller has missed 50 regular season games over the past 2 seasons. During the same timespan, he has also played in 50 playoff games. Coach Spoelstra toggled personnel and rotations several times during the playoffs, but when he called Miller's number, Miller excelled.

And he called Miller's number in the NBA finals. Miller played less than 19 minutes only once against the Spurs. He played over half of Game 6 - probably the greatest Finals game of my lifetime. I re-watched this game recently. The Spurs were terrified to leave Miller open. And his awareness on the defensive end was on point. There's Miller crashing into the paint to tie up a rolling Duncan on one possession, before feinting to the corner to dissuade a pass to an open 3 point shooter on the next.

Miller only played 900 minutes in the regular season. He could play less for the Grizzlies and I wouldn't bat an eye. Because in the biggest pressure cooker I've ever seen on a basketball court, Miller did all of the things it takes to win at the highest level.

Miller from Downtown - Every Grizzlies fan should know that Mike Miller can shoot the basketball. He shot 41.7% from 3 last year, and is +40% for his career. Even though he only played 900 minutes, his 175 3 point attempts would have ranked 3rd on Memphis.

Let's put Miller's sharpshooting in historical perspective. Only 8 players in NBA history have played at least 820 games (the equivalent of 10 NBA seasons) and shot at least 40% on 3000 three point attempts. Mike Miller is one of them.

Miller is a historically great 3 point shooter. And if you don't believe me, watch this (courtesy of @robertpera):

Miller's "hidden" talent - While everyone knows about Mike Miller the shooter, he is elite in another way. He is a fantastic rebounder, particularly on the defensive end.

While I think Coach Joerger hinting that Miller may play some power forward may be a bit of over-selling, this is a direct indicator of Miller's rebounding prowess. Miller has pulled down 16% of available defensive rebounds for his career (18% last year). That is better than every Grizzlies wing including Rudy Gay (Austin Daye fielded a 19.8% rate, but only in 328 minutes).

What does this mean? First, pairing Miller with the Grizzlies other rebounding wing - Tony Allen - means you can give up a bit of rebounding in the frontcourt, perhaps opening the door to play Tayshaun at the 4 against teams like the Hornets, Warriors and Rockets. All three of these teams' best lineups employ a true "Stretch 4," and any of them could be a playoff opponent.

Memphis Moneyball? - It seems that any stat-based organization invariably draws comparisons to baseball's Oakland A's "Moneyball" approach. Though this comparison is usually nothing more than a word association game, it may be more appropriate for the Grizzlies than most.

No other team in the NBA can toggle between offense, defense and WHITEWASH lineups as easily as the Grizzlies.

In much the same way, the Grizzlies can field a diverse array of crunch time lineups. Need offense? Throw out Conley-Pondexter-Miller-Randolph-Gasol. Need defense? Conley-Allen-Tayshaun-Davis (or Koufos)-Gasol. Need a 3 pointer? Conley-Bayless-Pondexter-Miller-Gasol. Want to throw out a WHITEWASH? Calathes (if signed)-Miller-Leuer-Koufos-Gasol. No other team in the NBA can toggle between offense, defense and WHITEWASH lineups as easily as the Grizzlies.

To combat this, many teams may elect to eschew calling timeouts late in games to keep the Grizzlies from substituting. OKC did this against the Grizzlies in Game 1 of their series, and Durant calmly hit a transition jumper to take the lead.

But imagine the headache that Doc Rivers will face deciding whether he can afford to play DeAndre Jordan on defense (to guard the Grizzlies frontcourt) if it means playing him on offense. Following a score, Rivers would likely prefer to sub Jordan (a horrendous FT shooter, and less than stellar offensive player) in favor of a player like Jamal Crawford or Matt Barnes. Of course, this would allow the Grizzlies to bring in their defensive replacements as well, and force Chris Paul has to score against a set defense.

Marc Jackson (with a minus defensive backcourt and offensive small ball lineups) and Scotty Brooks (with Kendrick Perkins) face similar dilemmas. The Grizzlies don't face quite the same issues because their two best players - Marc Gasol and Mike Conley - are both fantastic defensive players at the two most important positions on the court. Even if opponents choose to eschew a timeout (like OKC did), the Grizzlies have two elite defenders on the court and very probably Quincy Pondexter as well. The timeout allows the Grizzlies to go from good to great, whereas to matchup with the Grizzlies most teams must bring in a big they would rather not play on offense.

Obviously comfort and familiarity have a lot to do with it. Miller played in Memphis for 6 years, his wife has been involved with youth volleyball programs in the past, and he still has a home in the area. But make no mistake: Miller wouldn't be coming to Memphis if he didn't think he could win another title with the Grizzlies.

But Mike Miller thinks he can win a title in Memphis. And he's right.