If I Was Commissioner of the NBA for a Day: 9 Changes to the Game I Love

Everyone dreams of becoming the Commissioner of the NBA. Okay, maybe some people dream of becoming LeBron. Actually, being LeBron would be pretty cool. Can I change my answer?

Share All sharing options for: If I Was Commissioner of the NBA for a Day: 9 Changes to the Game I Love

Recently, Kevin Lipe wrote an article on "If I was the Commisioner For a Day." I read it, immediately became drunk on the prospect of such power in blog post form, (simple man, simple pleasures), and had to write one of my own. After all, if the movie "Before Midnight" taught me anything, it is that part of loving something is thinking about all the ways it ticks you off and colonizing it into a reflection of what you think it should be.

The following is a list of 9 changes I would make to the game that we all love:

1). Play "advantage" after a 24 second violation - Many times at the end of the shot clock, a wild shot is thrown towards the rim, and the ball winds up in the hands of the defense. Already players are streaking down the court to start the fast break, fans percolate to the very edge of their seats... and the play is stopped as the whistle blows. The defense has done their job perfectly, and their reward is an opportunity to score against a set defense.

What if, instead of the play being stopped, the defense was allowed to play on? Many times they would be rewarded with a transition opportunity, a much easier scoring attempt than scoring against a set defense. Aesthetically, the fewer stoppages the better.

For those that don't know, a similar rule exists in soccer. When a foul occurs, and the offense benefits more by simply playing on, the referee pockets the whistle. The ref maintains the ability to stop the play in the next few seconds if the offense doesn't maintain possession. One of the goals of the year in the English Premier League was scored after an advantage play. Here it is:

We're doing this. I have spoken.

2). Broaden the definition of "Clear Path" fouls - Another minor rule change aimed at opening up the game. I would instruct refs to call Clear Path fouls any time a clear transition opportunity is stopped by a foul. So many transition opportunities are halted because a player takes a foul, and refs are loathe to call a "Clear Path" foul if there is any defender with a possible angle to disrupt the play. My solution would be to simply call any foul on a fast break that does not occur during a shot attempt as a "Clear Path" intentional foul.

Call me crazy, but I would prefer to see the greatest athletes in the world doing greatest-athlete-in-the-world things.

3). Allow teams that own/operate an NBA D League team five additional roster spots - To encourage a true minor league, I would allow teams that directly own a D-League team to expand their roster from 15 to 20 players. Only 15 of those players would be available at any given time, with the other 5 playing for the D-League team.

Not only would this encourage the minor league system, but it would also give NBA teams more roster flexibility. Imagine being able to keep a player like Hamed Haddadi on your roster, but only "call him up" when you actually need him. Maybe you call him up if you have back-to-back games against the Rockets and Nets, or if Marc Gasol suffers an injury. Maybe you call up a player like Chris Johnson if you want another 3 point shooter at the end of the bench. Which leads me to...

4). Only the highest 15 salaries would count against the cap - In this way, there would be true competition between teams for the back end of rosters. A team like the Bobcats, in true rebuild mode - could opt to pay more for some young players, instead of giving them minimum deals. Teams over the cap would be left offering minimum level deals, and while some players may opt for the prestige of playing for the Heat or Lakers, the lure of more dollars AND more playing time, would help a team like the Bobcats secure another young player here or there that they would otherwise lose.

5). Allow high schoolers to enter the draft AND go to college - There may be an argument for restricting a person's ability to earn millions of dollars, but it isn't a very good one. Soccer players go pro in their early teens. So do tennis players. Nobody has a problem with kids that don't go to college becoming a welder to make ends meet. The idea that an 18 year old kid is able to make more money than many of us will make in our lifetimes is somehow too much to bear. For players like LeBron James, Greg Oden and Derrick Rose, college is essentially a trade school for basketball. They're on campus for 9 months, with little incentive to actually go to class. If anything, they are probably more concerned with not getting hurt than doing homework.

The NBA clearly takes advantage of this. They want kids to go to college so their teams have better pictures of who is actually good at basketball. A year's worth of data on a freshman in college is likely worth more than all four years of data in high school.

Perhaps if a player opts to go to college instead of the NBA, he must go for two years, during which time the NBA team that drafted him would retain his rights.

Why not have our cake and eat it too? Let high schoolers declare for the draft, get drafted, and decide whether they go to the NBA or to college. Perhaps teams are only allowed to draft a high schooler in the lottery. Perhaps if a player opts to go to college instead of the NBA, he must go for two years, a time during which, the NBA team that drafted them would retain their rights.

NBA teams are comfortable drafting International players (and increasingly, domestic players), and "stashing" them for years while they develop their game abroad. Why not allow this practice for high school players too?

7). Quit blacking out NBA TV games on NBA League Pass - Because some of us travel a lot and would like to watch our favorite team on the road if, you know, we spent almost $200.00 on league pass and the hotel we're staying in doesn't have NBA TV. Because most of them don't. This has to happen. It is known. 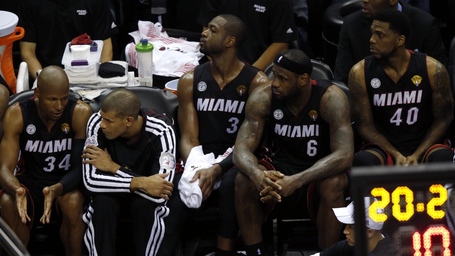 8). Give the players real chairs - For the love of God, get these freakishly tall human beings real chairs. Please. How it makes sense to invest millions of dollars in a superhuman, and then make him sit with his knees above his elbows, is beyond me. They look like parents cramming themselves into the kids' desk/chair hybrids at a PTA meeting.

9). Allow top playoff seeds to choose their opponents - And make them do it on National TV. Turn it into an event. Put the coach and best player from each team in a room with a ton of cameras, and have the number one seeds from each conference "call out" their opponents.

Everyone would watch. Everyone. Twitter would implode like a dying star. Imagine the hatred. Go back to last year. Miami would obviously call out Milwaukee. When Brandon Jennings (Milwaukee's playoff representative) is asked how he feels about being called out by the Heat, he looks deep into the camera, shouts "Bucks in Six," and promptly drops the mic. Bedlam, comedy, or probably both, ensues.

The top 3 seeds in each conference would choose their opponent, then explain why. The 4th seed would get stuck with whoever was left.

I have spoken. These things are happening. At least if I ever become commissioner for a day.