GBB writers will take a look at the Grizzlies 13-14 schedule by peering into each month of the season.

Nationally Televised Games:
Special Notes, Key Matchups, etc.
Here's a look at the complete schedule for the Month of December: 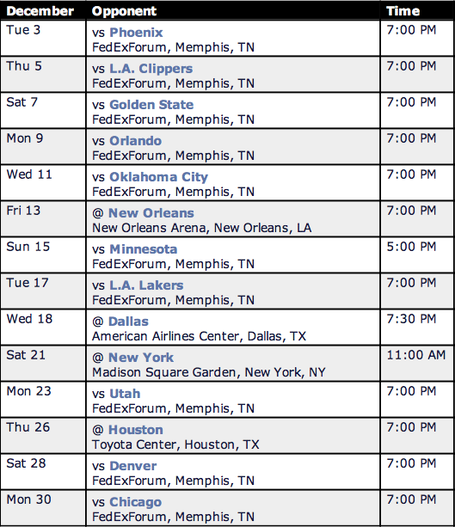 Though I hate the quote, this December stretch will show us "what the Memphis Grizzlies are made of". We all remember how well this team started out last year before hitting the wall in December. In hindsight you can say the 7-7 stretch was the difference between being the 5th seed in the Western Conference and a top-3 seed. Now the West is deeper and more talented than it was last season.

Excluding the Orlando Magic, each team on this list has a serious chance to make the playoffs, depending how the chips fall for each club. If Dave Joerger can get this club to win at least 9 games, they'll have made off good. Fatigue won't be an issue as 10 of the 14 games are at home.