In a draft night trade that went (unsurprisingly) unnoticed, Kosta Koufos became a Memphis Grizzly. The former Denver Nugget is a skilled 7 footer who can defend the paint as well as the pick and roll, all while dominating the boards. But what will make him so important to this team is his ability to push the pace and take some of the pressure off of Marc Gasol. Balance, tempo and efficiency are what will make the Koufos deal the true steal of the draft.

Share All sharing options for: Kosta Koufos Will be Invaluable to the Memphis Grizzlies in 2013-14

Grizzlies fans know the feeling well. The feeling of an ulcer developing every time Mike Conley hits the floor hard on a drive. The feeling of despair when Marc Gasol gets his 3rd foul in the 2nd Quarter with 10 minutes left in the half. The sheer terror that enters your mind when you realize the back-up point guard is Gilbert Arenas, Keyon Dooling or heaven forbid O.J. Mayo, or that Hamed Haddadi is starting the 4th Quarter of Game 7 of a playoff series. Bench depth has been a serious concern the past two seasons for these Grizzlies, with the problem being more evident at the center and point guard positions than anywhere else. Jerryd Bayless, Quincy Pondexter, Darrell Arthur and Ed Davis have all had spurts of productivity at the 2-4 positions and the addition of Mike Miller will help across the board. But the point guard and center spots have been major weaknesses, and it has cost this team in terms of rest available to Conley and Gasol, as well as in bench production from those positions.

The front office has taken steps this off-season to try to solve the issue. Nick Calathes, while unproven in the NBA, is a true point guard who will most likely be better than the alternative that was Tony Wroten. The real upgrade was achieved during the draft this past June, when the Grizzlies traded Darrell Arthur and the 55th pick in the draft to Denver in exchange for Kosta Koufos. Both were first round picks in the 2008 draft, and while DA had some great Grizzly moments, his health was far too inconsistent. The acquisition of Ed Davis as part of the Rudy Gay deal also led to a log jam at the power forward position and all but sealed Arthur's fate. Let's all pay tribute to DA's time in Memphis with his greatest sequence as a Grizzly, shall we?

While parting ways with DA was hard for some Grizzlies fans, the acquisition of Kosta Koufos was a masterstroke for the Grizzlies front office. His acquisition creates much needed balance for the front court, enabling varying levels of pace and creating interesting match-up difficulties for opposing teams. His ability to rebound the basketball and his improvement defensively will abuse back-up centers around the league and will allow for Marc Gasol to get much needed rest when necessary. Koufos also is a bargain, costing the Grizz $3 million a season through 2015 and at 24 years old will only improve. Kosta Koufos is a difference maker, and his play will be huge for the Grizzlies this coming season.

To better understand Koufos' game, let's take a look at some highlights of one of his better performances from a last season, an 18 point, 16 rebound game against...the Memphis Grizzlies.

The first thing that jumps out after watching that is that Koufos is an excellent offensive rebounder. His awareness around the rim and ability to play the ball off the miss is impressive...and is reminiscent of another player. In fact, according to basketball-reference.com, amongst players who started more than 50 games last year Kosta Koufos was sixth in offensive rebounds per game per 36 minutes at 4.2. In fifth, his new teammate Zach Randolph at 4.3 offensive rebounds per game. Imagine a lineup of Koufos and Z-Bo devouring the offensive glass, or one of Kosta and Marc in which two seven footers dominate the paint and allow for Marc to utilize his diverse skill set out of the high post more consistently with Z-Bo out.

Koufos is also athletic for a 265 pounder; he started 81 games last season for a Denver team that was second in the NBA in PACE and fifth in offensive efficiency, according to the Hollinger statistics that ESPN still uses. With the desire to push the pace clear after media conversations with Marc Gasol and new Head Coach Dave Joerger, lineups including Kosta Koufos and Ed Davis will enable the Grizzlies to push the tempo more successfully than if Marc or Zach were in. Or, in a small ball situation, a lineup of Conley-Bayless-Pondexter-Miller-Koufos would enable the Grizzlies to not lose much in terms of rebounding (Miller is one of the best rebounding shooters in the NBA) while creating match-up issues for defenses; Miller and Pondexter can be deadly from three, while Bayless and Conley can hurt you slashing to the basket or from range. And all the while, Koufos would be below ready to clean the glass and be ready to finish in the paint with his short range hook shot. Take a look at Kosta's shot chart. 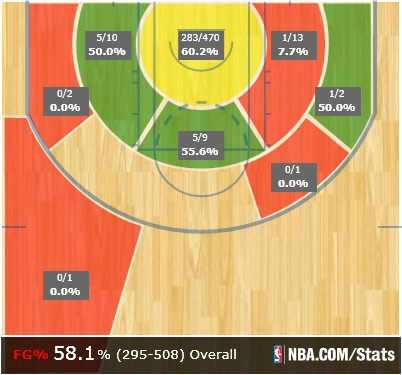 Remarkably accurate in the paint. Koufos knows his role: glass eater, finish in the lane.

While he is not as dominant a defensive rebounder, he is certainly capable of holding his own, rebounding at the same pace per 36 minutes as Joakim Noah. He also is a solid shot blocker at 2 blocks per 36 minutes, once again at the same pace as Joakim Noah. An underrated strength of his is that he is a solid defender of the all important pick and roll. Here is a great example from 2012.

Koufos is quick enough laterally to react underneath the pick, cut off the potential drive or shot of Jamal Crawford and still recover back to the pop shot attempt of LaMarcus Aldridge. What is even more impressive is that he is savvy enough to use body position and his hands to disrupt the second pick and pop attempt, giving Aldridge a "love tap" to force him further out than he would like to be for the pick and the eventual shot.

Now, Koufos is not quite to the level of defender as Noah, but this is a good example of analytics at work. The eye test tells you a player is better, but the numbers say its closer than you think. Koufos is not Noah, or Marc Gasol, but he is more than able to patrol the paint on the defensive end, especially against the other back-up centers of the league. If Ryan Hollins of the Clippers isn't nervous yet, he will be soon.

This is a good example of analytics at work. The eye test tells you a player is better, but the numbers say its closer than you think.

While Koufos will likely be able to have his way with most of the league's back-up bigs, his real value is in his ability to hold his own with the best the NBA has to offer at a steal of a contract. The Grizz will pay Koufos $6 million over two seasons. He will be paid less than Brandon Bass, Elton Brand and his center "replacement" in Denver, Timofey Mozgof. His contract is one of the best in the NBA. And the fact he started 81 games for Denver last season means he can slide in and fill in for Marc or Zach when necessary or preferable. Marc and Zach are the key pieces of this team, in addition to Mike Conley, but Koufos allows for the team to give bigs rest and games off. Kosta Koufos will be more than capable of helping the Grizzlies win games against the Kings, Bobcats and 76ers next season. Resting key players will be important throughout the season, and Koufos makes it possible to do it on the front line.

A trade for a back-up center isn't sexy, but it can make all the difference on a team like the Grizzlies.

A trade for a back-up center isn't sexy. The lack of coverage of the deal on draft night certainly shows that. But Kosta Koufos becoming a Grizzly will make all the difference in the world for the Bears on Beale. His ability to rebound offensively, push the pace and efficiently score the basketball inside the paint will allow for the perimeter players to have more opportunities and more effective possessions. Defensively, Koufos has the length and foot speed to defend the pick and roll and protect the rim on drives and put back attempts. His contract is perfect for the cost-conscious Grizzlies and his experience as a starter will enable our starting bigs to relax a bit more during the grind that is the NBA season.

The pit in your stomach feeling may still be around when important players like Mike and Marc are out of the game. But with the addition of players like Kosta Koufos, the pains may be alleviated somewhat this season.