The Grizzlies and Ed Davis have been dating, but Memphis now must decide whether they want to put a ring on it. Ed Davis is good at basketball. But how good, and how much is that goodness worth?

Are we entering into a new era of Grizzlies basketball? That's the decision that confronts the Memphis Grizzlies in the large, athletic and talented form of their 23-year-old power forward, Ed Davis. After playing a mere 544 minutes over 36 games with the Grizzlies, and only sparingly in the postseason, the Grizzlies are entering their decision window with Ed Davis. The October 31st deadline t to negotiate a contract extension with Davis is fast approaching. If they do agree to an extension, what implications will that have on Zach Randolph, a 32 year old power forward entering the final year of his contract?

Let's start with the basics.

Ed Davis is good at basketball (in really specific ways) - Since entering the league, Davis has been a productive player. He has consistently rebounded about 17% of total misses since entering the league, with only narrow deviations on both offense and defense. Though probably not sustainable, his blocks per 36 minutes nearly doubled in his 36 games with the Grizzlies. For reference, Davis went from being an average shot-blocker in Toronto, to being Serge Ibaka (only Ibaka, Larry Sanders, and the always entertaining Javale McGee blocked more than 7% of opponents shots last year).

Davis' high shooting percentage is more a product of shooting high percentage shots (read: dunks), rather than a suggestion that he has a masterful post game. Davis may not have a jump shot or a drop step, but athletic, young post players who convert more than 51% of their shots don't grow on trees, folks. In fact, only 17 players in NBA history can boast shooting 51%, while rebounding 17% of total misses and blocking 3.6% of opponents' shots through their first three seasons. Ed Davis is on that list, y'all.

The Grizzlies 6th most used lineup featured Ed Davis, playing with the starters, largely when Randolph nursed an injury. Over 76 minutes, that lineup outscored opponents by 25 points per 100 possessions. In other words, they blew people out of the water.  While 76 minutes is a small sample size, it is clear Ed Davis is a great fit for this Grizzlies team.

Among his Peers - Below are 3 "mystery players" per 36 minute averages over their 1st 3 seasons:

All three players were drafted in 2010, a draft sneakily poised to go down as the best big man draft of the last half decade. Along with the three above, paint monsters DeMarcus Cousins and Greg Monroe, as well as serviceable bigs Ekpe Udoh and Patrick Patterson also were drafted in the 1st round that year. For a draft that saw only 11 frontcourt players drafted in the 1st round, roughly half of them have turned into productive starters nearing the end of their rookie contracts, with only 3 going down as probably busts (I still hold out a glimmer of hope for Kevin Seraphim).

Davis' numbers are very, very similar to Favors and Sanders. Davis gets a big nod in FG% (partly due to the by-product of being an offensive specialist, as evidenced by the lower usage rate), and suffers a bit as a rim protector. Yet Davis has not been spoken of in the same breath as the previous two, and will likely not sniff the contracts of the other two players. 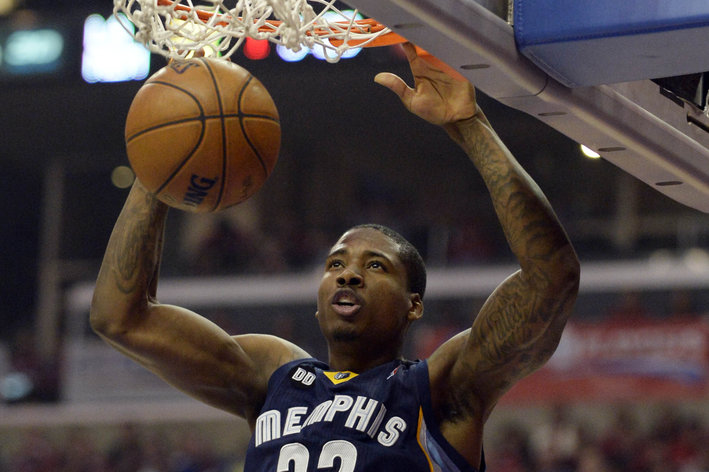 Analysis of Ed Davis' half season with Memphis

Larry Sanders - drafted 2 slots behind Ed Davis - recently inked a 4 year $44 million contract extension with the Milwaukee Bucks. Sanders' career numbers are skewed a bit low, as last year was a coming out party for him. The Bucks are betting on the come with him, so to speak. They are betting that the upward trajectory of Sanders' career arc continues, and they are doing so with more evidence to support their case than the Grizzlies had in a similar situation with Mike Conley.

But Larry Sanders has something in his arsenal that Ed Davis simply cannot replicate, and that is length. Ed Davis measured almost a full inch shorter than Sanders at the combine. This smallest of genetic differences means quite a bit when allocating dollars in the NBA.  Unless Ed Davis inspires Kirk Goldsberry to write an article like this, Davis will not command Sanders money. Part of that is what Sanders does to opposing teams FG% in the paint; the other part is simply that teams can't talk themselves into Davis being a "true center."

Derrick Favors holds a different type of advantage over Davis - he's 2 years younger. Certainly, both players are young, but Favors entered the league barely 19 years old, and is still very clearly learning how to wield his superhuman physique. Favors' production is likely to see another bump this year, and if the Jazz can keep him for less than Sanders/McGee money, they should count themselves lucky.

The narrative surrounding a player influences their value.

The narrative surrounding a player influences their value. Sanders and Favors both have higher "ceilings" than Ed Davis, but "ceiling" and "potential" exist only in theory. The numbers suggest that Davis has been closer to the other two so far in his career. While I have outlined the real differences between these players, the Bucks and Jazz will pay a premium for what might happen in the future.  Meanwhile, the Grizzlies have an accurate picture of a productive player on which they may not have to pay the same "potential" premium.

Can Ed Davis improve? - Davis's per 36 minute numbers are good, but they have remained alarmingly flat through the first 3 years of his career.

As you can see, he came into the league rebounding, converting in the paint, and blocking a few shots, and he hasn't really shown the ability to pass, shoot jumpers, or post up.  That's not a knock on Davis.  There is incredible value in being really good at a few skills, rather than trying to do a bit of everything.

I am skeptical of Davis expanding his game, not only because skill sets don't tend to magically appear, but also because his role on the Grizzlies won't ask him to grow much. Davis won't be taking elbow jumpers. He will not be asked to "carry the second unit" with postups. Where Davis can really grow is in the pick and roll, on both offense and defense. On offense Davis rarely makes contact with the defender, and could often be called for a moving screen. On this Ed Davis "highlight" Davis whifs on the screen, then stands around for a bit before taping a cheetah to his back and dunking.

On this 2nd highlight (fastforward to the 20 second mark), Davis does a decent job of sticking with the screen, and then impressively receives a pass on a dead run to the rim. If he can do this consistently, his youtube presence will grow exponentially:

On defense, Davis seemed to think through his movements, which make him a half beat late. To recover he often lunges into position, which allows opposing players to use his momentum against him. Davis needs to "do his work early," as they say, in the pick and roll.  If Davis can learn how to recognize what is coming, and better position himself on defense, it is scary to think how stellar the Grizzlies defense could be.

So... How much is Davis worth to the Grizzlies? - If I was looking for a power forward to compliment Gasol on offense, he would operate almost exclusively in the paint, and preferably would not need to score via straight postups.  He would be a great rebounder - both on offense and defense (Marc Gasol has never been an elite rebounder). He would have some athleticism, and be able to play some backup center in a pinch.

In short, he would be Ed Davis (the other alternative is the exact opposite of Ed Davis: a three point shooter, that still rebounds well - like Ryan Anderson or Ersan Ilyasova - neither of whom needs to postup, or occupy the same space as Gasol. But I digress).

We've already established Davis is not getting Sanders money, and getting an extension similar to Taj Gibson (4 years, $32mm) may be a stretch as well.  I know the Grizzlies would be ecstatic if they were able to secure Davis for somewhere slightly north of the similarly un-hyped if not quite as productive Jason Thompson (4 year, $25mm). But Davis may choose to play the season out rather than sign that contract. The end game may be 4 years $28mm, but will the Grizzlies decide that Kosta Koufos provides many of the same skills with a smaller price tag (2 years, $6mm remaining)?

Whatever the outcome, this decision is crucial because of this other power forward on the Grizzlies roster. You may have heard of him. He goes by Z-Bo.

Ed Davis' development may mean step back for Zach Randolph 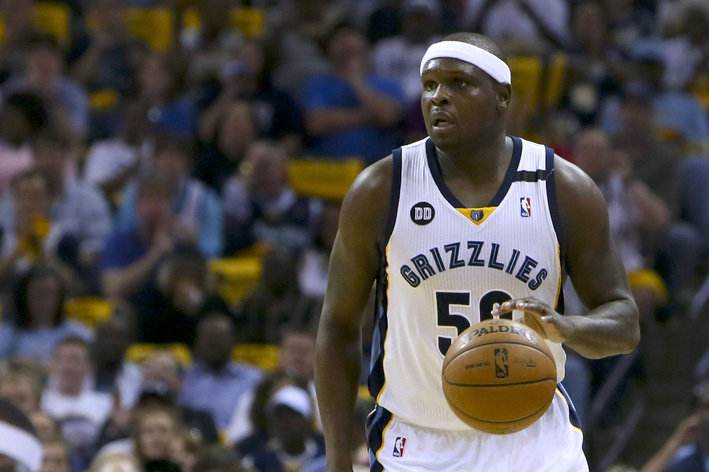 Can ZBo adapt his role to fit the Grizzlies?

Z-Bo. The elephant in the room - If the Grizzlies do sign Davis to an extension, it will likely be the denouement for the Zach Randolph era in Memphis. That doesn't mean that Z-Bo should be traded; he is, frankly, worth more to the Grizzlies than any other team. The tepid trade market for Zach Randolph has as much to do with his contract as it does with, what I perceive to be, a skepticism among the other 29 teams that they can re-create the same Z-Bo magic that the Grizzlies have managed to concoct.

Z-Bo is, probably, the third most productive Grizzlies player at this stage of his career. But Davis being on board long-term will, in some form, signal the end of the Z-Bo era. Few teams can afford to invest large money in two frontcourt players, let alone three.

The End Game - This is probably the best time to lock Ed Davis up long term.  They will be negotiating with a player that only played 15 minutes a game for them, by far his career low. Davis will almost assuredly play a larger role in 2013-2014.  If he is locked up before the season, it will likely be at the Grizzlies desired price. 3 years, $18mm

Yet from the Grizzlies perspective, there isn't that much risk if Ed Davis plays the season out without signing an extension. Even if Ed Davis has his best year as a pro, in terms of actual production, and goes for something like 9 points, 7 rebounds, 53% FG, 1.3 Blocks, in 22 mpg, what does that production get him in an open market that will feature Demarcus Cousins, Greg Monroe, Favors, Dirk and Pau Gasol? That's a pretty healthy supply of power forwards. And though they have not acted like it in the past, the Grizzlies hold all the cards because Ed Davis is a restricted free agent, meaning they can match any offer he receives.

If the Grizzlies don't lock Ed Davis up, I would look for the smallest of Ed Davis trade rumors to sprout up around December

After nearly 2,000 words written about signing Ed Davis to an extension, the most likely scenario will be that all parties agree to wait until the end of the season. The Grizzlies are legitimate contenders, and most teams stay the course when the championship window is even theoretically open. Boston did it for years before finally blowing it up a few months ago. If the Grizzlies don't lock Ed Davis up, I would look for the smallest of Ed Davis trade rumors to sprout up around December. Pairing Davis with Tayshaun Prince's contract opens a whole slew of potential trades.

There are few bad outcomes for this saga. The Grizzlies new front office seems to take their time before making any decisions. Maybe they will elect to wait until the end of the season to revisit Ed Davis's contract. In the meantime, Davis has a lot to play for.