What Does Mike Miller Have Left in the Tank for the Memphis Grizzlies?

The sharpshooter if filling up for another season. What's the best way for the Grizzlies to get the most mileage out of him?

Share All sharing options for: What Does Mike Miller Have Left in the Tank for the Memphis Grizzlies?

The hardest part about being an observer of the NBA is watching our favorite players hit the inevitable wall. You can only be good for so long until father time takes its course. And trust me, no one has defeated father time. Even greats like Hakeem Olajuwon and Patrick Ewing have fell victim to age and time.

This brings to me Mike Miller. There's a reason why the free agent signing of the 33 year old guard/forward rarely moved the meter. While he ended his tenure with the Miami Heat as a two-time NBA champion, his three years with the club were a testament to what we think of him now; he's extremely injury prone and old.

Old? Sure if you want to call 33 old. But the injury prone thing? I'm not completely sold on that. And the numbers that most provide to back that statement up are quite flawed. Since joining the Miami Heat, Miller has participated in 139 of the available 230 games. That's 60 percent games played. Check out what Jeff Zillgitt of USA Today had to say on Miller and his injuries after the 2012 NBA Finals:

After last season's NBA Finals, Miller had surgery on his right shoulder.The sports hernia surgery sidelined him for 12 games at the start of this season, and Miller missed 14 games late in the season with a sprained ankle.

If we were entering the 2012-13 season instead of the '13-14, I'd be in agreement with everyone yelling "injury prone." Fortunately, we're not. In comes the '12-13 season where Mike Mike plays in 59 of the available 82 games, starting in 17. That's a step-up from the previous two seasons, and the difference between last year and 2010-2012 is the team's roster situation. Rarely did the Heat need Miller. Why? Well, because they brought in Ray Allen, a player who is a step-up from Mike Miller talent wise. Add Allen to a grouping of Miller, Lebron James, Dwyane Wade and Shane battier and there isn't a lot of room for Mike to fit, especially with two of the named players being superstars. Him missing games had little to do with the bodily harm and more to do with "we don't need you now, just be ready in the playoffs". 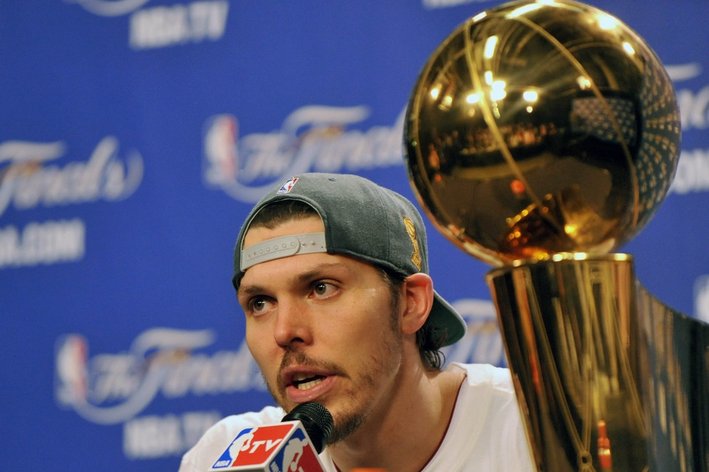 Mike Miller's return to Memphis was met with enthusiastic applause.

And boy, was he ready come playoff time. He wasn't burdened with the injuries that come associated with his name, and provided all of what you'd expect out of a designated shooter. The stats don't say Miller was a key player, averaging 4.8 points per game from Game 4 of the Eastern Conference finals until the NBA Finals, but his presence and floor-spacing (shot 56 percent from three in this span) made a bigger impact than the numbers could paint.

It makes me wonder why, as a society, we aren't quick to shed labels as quick as we are to dish them out.

Now he's back Memphis and in the best shape he's been in since 2011.

He'll fit in nicely in the pick-and-roll heavy offense and will get endless looks as a result of defenses digging down on Marc Gasol and Zach Randolph in the hi/low post. His only job will be to hit threes, and luckily he's still good at that. According to Synergy, Miller shot 40 percent on spot-up threes and 43 percent on transition threes. Spot-Up and Transition shots accounted for 72.3 percent of his total offense in 2012-13.

And like a natural shooter, Miller just knows where to be. After looking over the film, Miller was never the type of player to come off endless screens to get the open shot like a Ray Allen or J.J. Redick. He knows how to fill lanes on the break and spread the floor in ways that can put defenders at a disadvantage.

Take this play against the Indiana Pacers for example. 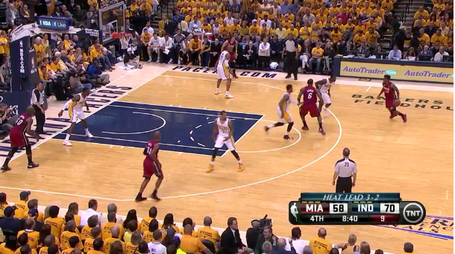 Here's the traditional pick-and-roll ran at the top of the key by Norris Cole and Lebron James. Mike Miller is in the far right corner being guarded by David West which is a result of the Heat going small. The roll from James, a dynamic player at the rim, forces David West to dig in. Miller steps from the corner to the wing and you get this: 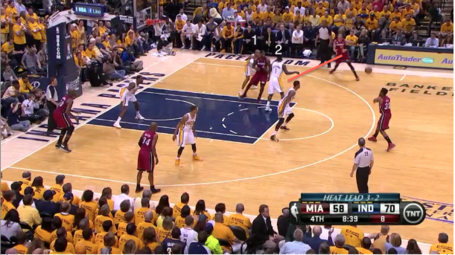 The result is a made three, but Miller's willingness to step up instead of remain in the corner is what's best about this play. Had he stayed down West could've easily defended both Lebron and Miller without overcommitting to either player.

I point this out because what's still tormenting the minds of Grizzlies fans is the Western Conference finals and the way the defense of the San Antonio Spurs made the bigs unusable. Every team can't do what San Antonio did to Memphis. Most lack the personnel and coaching to pull this off, but that team finished the year off representing the Western Conference in the NBA Finals. As far as I know, they're who the road goes through until proven other wise.

Other than his shooting Miller's a nice rebounding guard/forward for someone who is awfully "brittle". Last season he finished with a defensive rebound percentage of 18 percent. For perspective, Paul George's was 19% and Kawhi Leonard's was 17.1%. They are two of the better rebounding forwards in the league at the moment.

Defensively, he isn't going to be a lock-down defender, but playing alongside Conley, Allen, Pondexter and Prince, he won't asked to guard a big threat on defense. Erik Spoelstra did a great job of "hiding" Mike when he on the floor.

He fits in perfectly with the current group of players whether we're talking skill sets or pure moxy.

Hopefully nothing that I mentioned above is heavily used in the regular season. Being "in the best shape of his life" is encouraging news, but if the Grizzlies don't handle Mike Miller similar to how the Miami Heat did, then they're doing it wrong. It's not that I don't think Miller isn't good anymore. I was a huge advocate of the signing, but Mike's more of a post season asset than a regular contributor. The Grizz won 56 games last season. Mike Miller's addition won't be the difference between them winning more or less than that total. The Heat won 66 games w/ minimal contributions from the forward. And as it was shown with the Heat, he can be the difference in winning an extra playoff game, or better, an entire series.

Erik Spoelstra and company set the blueprint on how to deal with Miller. Hopefully the Grizzlies follow it to maximize what he can bring to the club. He fits in perfectly with the current group of players whether we're talking skill sets or pure moxy. We'll just have to wait 82 games before we can properly see him be a key player. And that's not a bad thing.