Packing the strong side: the Grizzlies' aggressive defensive scheme

The Grizzlies had one of the league's strongest defenses last year. With talents like Marc Gasol, Mike Conley and Tony Allen in their lineup, they took advantage by using an aggressive defensive scheme based on filling the strong side of the court.

Share All sharing options for: Packing the strong side: the Grizzlies' aggressive defensive scheme

Aggressive strong side defense is all of the rage in the NBA. The NBA's champions in the Miami Heat employ one of the most frenetic help schemes in all of the NBA, and they're joined by many other teams including the Chicago Bulls, the Toronto Raptors and the New Orleans Pelicans. It puts immense pressure on opposing offenses if played properly (which is no easy job, as the many young players on the Raptors and the Pelicans will attest), with constant defensive rotations and a lot of bodies on the strong side of the court.

Memphis is another one of those teams that played a very aggressive defensive scheme. It worked well for them, as they had ranked third in opponent field goal percentage and second in defensive efficiency (points allowed per 100 possessions) in the league last year at 43.5% and 97.4 points.

The Story of a Grizzlies Fan in Vancouver 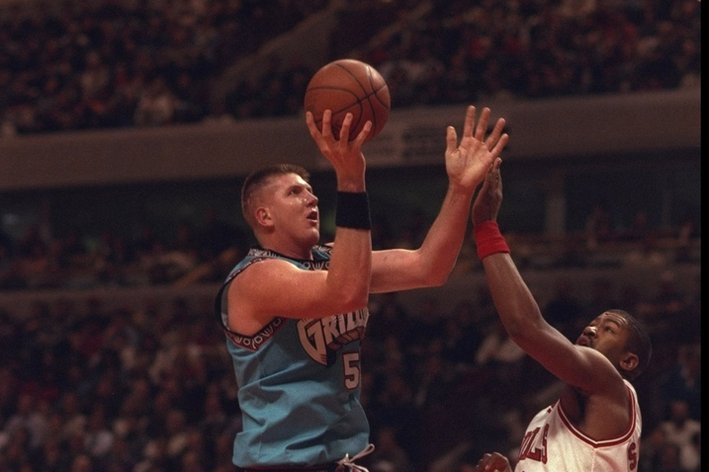 What the Grizzlies did that worked so well was that they packed the strong side, shifting the defensive positioning of all of their players and using help defense generously to pressure the offense and force them into tough situations. Grizzlies defenders that were guarding players on the weak side perimeter would venture away from their check and towards the paint. Sometimes, those guards would tag up on an opposing big man to allow the corresponding Grizzlies big man to shift even closer towards the ball.

By crowding the paint and putting extra bodies close to the ball, there's little space for the ball-handler to work. Dribble penetration gets stifled easily by all of the players in the paint, and even out on the perimeter, help defense can assist because weak side defenders have shifted over to guard the paint. Even though the game is 5-on-5, aggressive help defense allows the defense to claim the numbers advantage on the strong side of the court. Through strength of numbers, the offense is thrown into disarray and they're forced to adjust.

In this play, the Grizzlies use two players to trap Evan Fournier in the pick-and-roll on the left wing. Even as the pass goes to an unguarded Kenneth Faried rolling towards the rim, Zach Randolph and Tony Allen are both close enough to easily rotate over and force Faried to adjust the shot into the point where it's an ugly reverse layup that doesn't even hit the rim.

What you might notice here is that, while the strong side of the court is absolutely packed, the Grizzlies are choosing to neglect players on the weak side. If they have a numbers advantage on the side of the court where the ball is, then they're giving up a player or two where the ball isn't. It's typical to see a wide open shooter in the far corner or a guy open around the weak side elbow, depending on how the Grizzlies play the possession.

The line of thinking is that, by pressuring the ball-handler with multiple defenders and guarding the players close to him, the Grizzlies can apply a high degree of difficulty on the opposing offense where it matters most and force them to adjust. If they try and get the ball to the open players on the weak side, the Grizz simply have to recover (and are aided by the time it takes to get the ball across the court). As a team, they manage this very well and it helps that they employ Mike Conley and Tony Allen. Both are fast and intelligent defensive players that thrive in the passing lanes, and are also very good at closing out after packing the strong side. This is especially true for Conley, who might be one of the league's best in this particular skill.

Watch this next play as Conley hangs around the free throw line to dissuade the dribble penetration off of the pick-and-roll, but is able to recover to his man in the far corner in time to prevent the open three as well.

It's not just the guards that are great at playing the passing lanes and recovering to their own man as well. Marc Gasol, who is normally that big man that I referenced earlier who shifts over when a guard tags up on his check, is great at these skills as well. He'll position himself perfectly to dissuade dribble penetration, and as you may have heard before, he's great at the 2.9 skill where he can avoid the defensive 3-second call but maximize his impact in guarding the paint while away from his check. However, when the pass goes to his man (and the guard tagging up on that player is pretty much limited to bumping said player a little bit to slow him down), Gasol does a great job of recovering to challenge the big man under the rim.

Here, Gasol hustles back from trapping John Salmons all the way at the top of the arc and slows down DeMarcus Cousins enough for Mike Conley to pry the ball loose.

Of course, aggressive defense will result in holes left open. Teams plan to beat schemes like this by taking advantage of players left open on the weak side through misdirection, good passing and shooting. The Grizzlies have one of the best defenses in the league, and even from three, they limited to opponent to 33.8% shooting – second in the league.

In this play, however, the Spurs use a pick-and-roll to cause the defense to collapse into the paint then using a kick-out pass and some swing passes to get the ball to Gary Neal wide open on the weak-side. All of the subtle off-ball movement is geared to put the defense into disarray, and admittedly, it's kind of beautiful. Danny Green screens for DeJuan Blair to set a pick for Nando De Colo, then Matt Bonner sets a screen for Danny Green to get back to the perimeter. After Bonner sets his screen, he goes to the perimeter as well, setting up the deadly trio of Bonner, Green and Neal on the perimeter. The final touch is, as an already out-of-position Grizzles defense is desperately recovering to the open shooters on the perimeter, De Colo steps towards the corner and draws Tony Wroten with him. It's only a few steps, but it keeps the rookie Wroten concentrated on De Colo for a few moments before Wroten realizes he has to rotate over to Neal.

Not every team is the San Antonio Spurs, of course. While they will make mistakes rotating even without so much misdirection from the offense (which will happen with such aggressive defensive scheming), the Grizzlies mostly do a good job of recovering on to open weak side players. The close-out ability of Conley, Allen and the rest make it difficult for opposing offenses to take advantage. For less creative offenses like that of last year's Houston Rockets or Los Angeles Clippers (the additions of Dwight Howard and Doc Rivers respectively might change things up a little for next season), facing the Grizzlies' defense was even more difficult.

The Grizzlies have a new coach of their own in Dave Joerger, but don't expect the defense to change much.

The Grizzlies have a new coach of their own in Dave Joerger, but don't expect the defense to change much. Breathing life into the offense is his priority as the new head coach, and he was already responsible for much of the defensive scheming during Hollins' tenure.

We're starting to reach the stage now that teams around the league are learning to adjust their offenses to be more creative and layered (with misdirection and multiple sequences to a play) against defenses that play heavy on the strong side as the Grizzlies do. No doubt, the Grizzlies will eventually have to make adjustments of their own to contend with the adjusting offenses. Such is the nature of trending schemes, offensive or defensive, in the NBA.

For now, however, we're in a good place with our defense and we're already ahead of the curve. Let's enjoy it while we can, and hopefully ride it to some real success.