Jerryd Bayless chose to return to the Grizzlies. Now he looks to improve upon a solid 2012-2013 campaign.

Following a generally solid campaign, many pundits thought he would opt to hit the free agent market in search of the security of a long term contract.

Bayless had other thoughts. Citing his love for the city and team, Bayless surprised more than a few folks when he decided to return to the Grizzlies for the upcoming season. Alternating between both back court positions, Bayless averaged 8.7 pts, 3.3 assists, on FG/3P/FT shooting splits of 41.9/35.3/83.6.

There was also this:

Perhaps the play of the year, Bayless showed that he was not scared of taking the big shot, or rising to the occasion. That big game experience will almost certainly come in handy in what is now a somewhat crowded rotation. Minutes may be in higher demand, but Bayless's ability to play either backcourt spot will be crucial for a Grizzlies team that is trotting out another unproven backup point guard, Nick Calathes.

Two years ago, Bayless shot 42.3% from 3 pt range - a huge outlier for his career. While he came back to earth last season - 35.3% - that mark was still better than his first three seasons. Good FT% is usually correlated with above average 3 pt shooting, and Bayless career 82.4 FT% shows that a long range shooter may be lurking somewhere within his stats. Bayless shooting somwhere around 37%-38% would be a huge boost to the Grizzlies previously anemic long range attack.

And Bayless has much to play for in the upcoming season. In the last year of his current contract, and entering his prime, Bayless has a real chance to cash in. If he can be a slightly more efficient offensive player, perhaps post an above average 3 pt shooting mark, and not allow his defense to suffer, he should be able to lock up a decent contract. 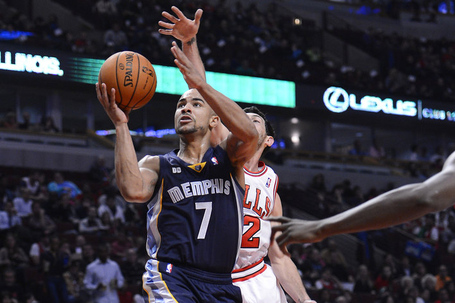 Much of last year, he seemed to be at odds with Coach Hollins vision for what a point guard should be. Eventually player and coach settled into a truce out of necessity, moving Bayless "off the ball" rather than giving him the burden of "running the offense." I use quotes in the previous sentence, because Hollins track record with backup point guards has been.... how do I put this delicately... less than stellar. Perhaps Coach Joerger will have a little more success with Bayless - after all, Bayless would not have returned to the Grizzlies if he was at odds with Coach Joerger.

Minutes may be harder to come by, but Grizzlies fans should have plenty of optimism that Jerryd Bayless will build on his solid first season with the Grizzlies.