Atlanta- Al Horford (Out, Pectoral) John Jenkins (Out, Back)

For the Atlanta Hawks perspective, check out Peachtree Hoops

Cliches are annoying, aren't they?

Often, sports are the biggest culprits of using the same phrases over and over and over again to try and explain various events. However, there is a reason that these statements echo through the decades. From sport to sport, era to era, there are universal ideas that help keep equilibrium in the minds of competitors and consumers of sport alike. They manifest themselves everywhere; are you a quarterback who throws the ball all over the field and into dangerous spots? "He's a gunslinger." Played 40 minutes in a 60 minute hockey game? You likely "left it all out there." Did you recently win a championship? It is quite possible that at one point you said that it was the defense that won it for you.

Cliches, while tired and overbearing at times, have their place. For the Memphis Grizzlies, the one that will likely be leaned on for the foreseeable future is "we have to take it one game at a time." Ignore the logical "you can only play one game at a time" thought for a moment and embrace this reality. The Grizzlies are attempting to climb back into the playoff picture in the crowded Western Conference. The Grizzlies are 4 and a half games back of the 7 seed, and are 6-4 in their past 10 games. It cannot be gained back all at once though. As the season goes on, the only way they will get to their desired destination is by controlling what they can control and...you guessed it, win one game at a time.

The Grizzlies will have to embrace the "one game at a time" cliche if they hope to achieve their goals.

Mike Conley has played at an All-Star level, Zach Randolph has done his best Wendigo impression racking up assists and players such as James Johnson and Jon Leuer have begun to take on Paul Bunyan levels of legend in the eyes of Grizz Nation. The result of previous games and the schedule coming up, however, matter not on this particular day at this point in the season. As the team continues their push toward the playoffs, the next "one game at a time" is against the Atlanta Hawks. How can they succeed? Three keys...

Our Best vs. Their Best: Who Wins?

The Hawks are having a better-than-expected season so far, thanks mostly in part to the efforts of Point Guard Jeff Teague and Power Forward Paul Millsap. These players average 34 points, 13 and 11 assists between the two of them, and their next closest scorer, Kyle Korver, averages 12 points per game. Especially with their star Center Al Horford likely out for the season, these two players will be counted out more than ever if the Hawks hope to maintain their status as an Eastern Conference "power."

The interesting thing is that the Grizzlies' two best players, since their star Center Marc Gasol is also out, are Point Guard Mike Conley and Power Forward Zach Randolph. Between the two of them, they average 35 points, 13 rebounds and 9 assists. These are two pairs of players who are instrumental to their respective teams' success, who also play the same positions. Who gets the best of the other in their one-on-one match-ups will help to decide the contest.

Shut Off the Long-Range Water

Here is a look at the Atlanta Hawks' team shot chart for the season thus far. 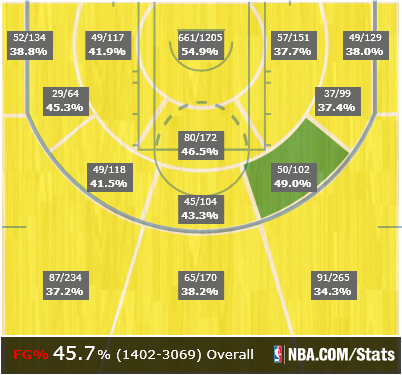 They do not shoot below average anywhere on the floor, and of the 83 shots they take on average per game they shoot 25 from three. They have six players on their roster who average at least one made three per game and five of them shoot no worse than 36% from beyond the arc. Kyle Korver is shooting an insane 48% from three. FOURTY. EIGHT. PERCENT.

What does all of this mean? The Hawks like to shoot threes. They make them. The Grizzlies have to stick and defend shooters if they hope to win this game.

Throw Off the Ratio

The Atlanta Hawks in wins average 27 assists on 40 made baskets, with only 14 turnovers. That would almost be a 2:1 assist to turnover ratio. That is not too shabby. In losses, however, the Hawks average 23 assists on 36 made baskets, with 16 turnovers. That makes for a little less than a 1.5:1 ratio. When Atlanta plays team ball and is able to get shots in advantageous spots, they convert four more opportunities on average. That .5 can, and has been, the difference between winning and losing for Atlanta.

Defending the three pointer and forcing the Hawks to play as individuals will be key to a Memphis victory.

In order for the Grizzlies to defeat the Hawks, they are going to have to force Atlanta into bad decisions. Contested jumpers, poor ball movement and pressure on the ball handler can all create scoring opportunities in transition. The Grizzlies' plodding pace can also limit the possessions of the high powered Hawks offense. Control the tempo, force the Hawks to play inefficient hero ball. This will throw off that ratio.

The Grizzlies' gruesome twosome of Randolph and Conley will outplay Millsap and Teague, the Grizzlies will force the Hawks to play their style and Memphis will go in to the Thunder game Tuesday night with even more momentum.