Head Coach David Joerger has had to improvise and implement new plays since Marc Gasol went down. One play the Grizzlies go to often early in the shot clock is a curl around an off-ball screen on the low block. It gives the Grizzlies multiple options and often works to perfection.

This surprising change in offensive rating is not presented to imply that Gasol was holding back the offense. That certainly was not the case. Rather, it is a testament to Head Coach David Joerger and how he has adjusted magnificently on the fly in his first year as an NBA head coach. In Gasol, Joerger saw a crutch to lean on every night. Everyone knew the offense was flowing through Gasol, and there wasn't much for Joerger to do but sit back and watch Big Spain pick apart a defense with deftness only a select few in the NBA possess.

Without Gasol, Joerger could no longer sit back in admiration. He, much like the rest of this team once it's best player went down, had to undergo a sort of baptism by fire process. Joerger's mettle has been tested, and he has become a much better coach amidst the adversity. He has expanded what was a bland playbook to contain myriad dynamic plays.

Click on through to listen to a fantastic and genuine interview with the new fan favorite of the Memphis Grizzlies!

Joerger has developed multiple plays that involve a multitude of off-ball screens, particularly down screens to set up a bevy of curls off those screens. These plays are primarily called early in the shot clock. Entering the season, Joerger harped on getting into sets earlier in the shot clock. The previously aforementioned plays, utilizing screens and one or multiple curls, were only called several times before Gasol's injury. Since, a version of this play can be seen multiple times a game.

One play that Joerger has grown particularly fond of utilizes a down screen on either low block to set up a curl around the screen to get an easy look in the paint with the shooting guard or small forward the intended beneficiary. This time it's the beloved James Johnson.

Step One - The Set-Up

As Nick Calathes crosses halfcourt, the play is called. Zach Randolph needs to be positioned on the low block before the play begins, so he calls for Jon Leuer to swap spots with him and begins to mosey his way down low. 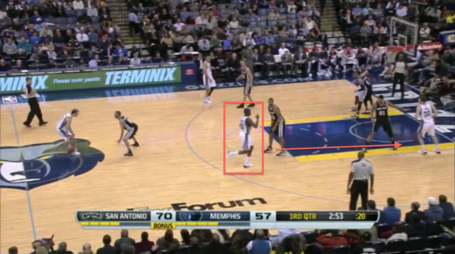 Leuer hears Randolph's call to switch positions on the floor and heads up to the elbow to take Randolph's spot. Notice that Tayshaun Prince is positioned on what will be the weak side of the floor away from the play. This is by design to create adequate space for the play on the strong side and to draw a potential help defender away from the ball. James Johnson is positioned on the weak side block. He will be the recipient of the play. 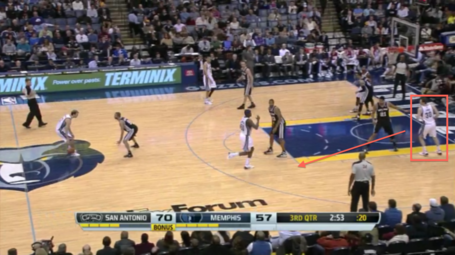 Calathes waits to make sure Randolph is set on the low block, then Leuer arriving at the elbow triggers a pass to him from Nick Calathes to start the play. 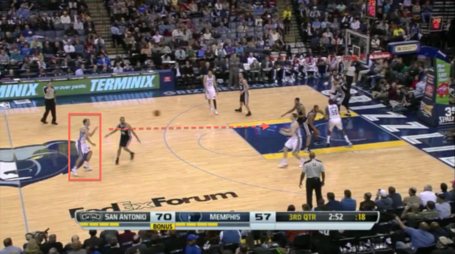 By now, you can begin to see what is about to happen. Randolph plants his feet facing the paint to set an off-ball screen for Johnson, and Leuer is going to be the facilitator on the play. 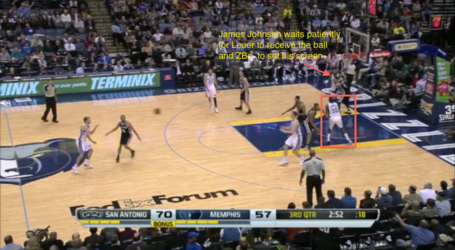 When Leuer catches the ball, Johnson begins his action, a cut across the baseline. Notice how Johnson waited for Leuer to actually catch the ball and pivot to face the rim before starting his action. If he is not patient, the timing of the whole play is off, and it probably does not work. 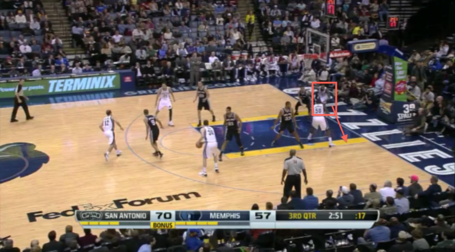 When Johnson meets Randolph's screen, he recognizes that his defender, Danny Green, has made a mistake and is hugging his hip too tightly. Johnson does the smart thing and begins his tight curl action right around Randolph's hip. This leaves no room for Green to get through, and he is forced to take a longer route around the screen to avoid getting caught momentarily on the screen. This gives Johnson and the Grizzlies the advantage. At this point, Leuer is still alertly waiting for Johnson to make his final move before getting rid of the ball. 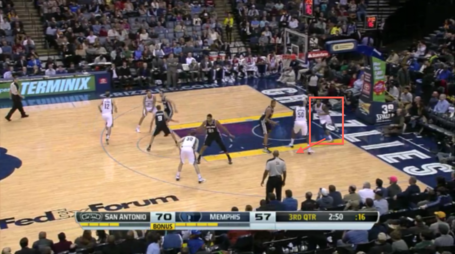 Johnson realizes he has Green beat at this point, and he makes his final move around the screen, hugging Randolph's backside and curling back into the paint to receive the ball. 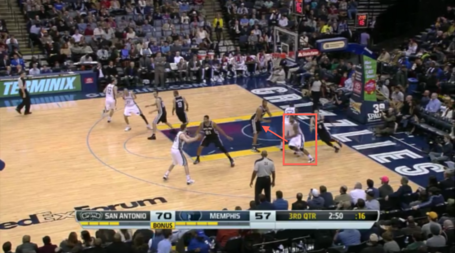 It's now time for Leuer to give up the ball. He delivers a terrific overhead pass to avoid his defender tipping the ball that leads Johnson right where he wants to go: the rim. 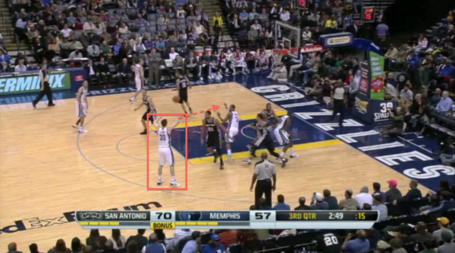 Now, all that's left is for Johnson to finish the play. Green does a decent job trailing Johnson, but with Johnson hugging Randolph's body as tightly as he does on the curl, there isn't much else Green can do, which is what makes this play so lethal. With Green trying to recover, he enters the paint overaggressively and flies right past Johnson trying to block the shot. Too bad for Green, Johnson craftily pump fakes, leaving nobody between Double J and the rim. He goes up and finishes an easy two-hand dunk, a perfect end to a perfectly executed play. 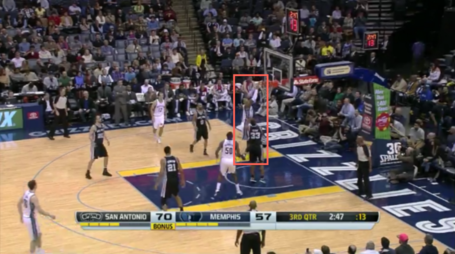 Here's a video of the full play.

The option presented in the pictures and video above.The great thing about this play is the multiple secondary options available if the primary option does not pan out. That's what makes it so difficult to stop, and it's likely why Joerger goes to it so often.

The options on the play are as follows:

All together, that makes five options on just one play. While every Grizzlies fan is anxiously awaiting Gasol's comeback, it has been nice to see Joerger and the rest of the roster grow without him. This growth will certainly help the Grizzlies down the line this season if, and when, they make the playoffs, which is looking increasingly likely these days. David Joerger deserves a ton of credit for expanding the playbook and having this offense clicking better than it has in a long time. However, in typical Grizzlies fashion, Joerger will undoubtedly and humbly deflect the praise. That's fine, but he won't be able to deflect it forever if he keeps calling plays that work this well.