GBB Roundtable: Is Mike Conley more important to the Grizzlies than Marc Gasol?

The GBB staff tossed around this idea and we'd love to hear what you think as well.

Share All sharing options for: GBB Roundtable: Is Mike Conley more important to the Grizzlies than Marc Gasol?

As we watch Mike Conley continue to become an incredible basketball player in front of our very eyes, I begin to think about how worried I was when Marc Gasol went down with his knee injury. My worst fears (that were starting to look like real possibilities as recent as 2-3 weeks ago) included an empty FedexForum, a tanking season and strife amongst the Grizzlies locker room. At the same time those fears were moderately quelled with the idea that as long as we had Mike Conley on the floor we would have a chance to salvage the season.

Recent performances by the Grizzlies suggest that 2013-14 is indeed salvageable, but what would the season have looked like if it had been Mike Conley that pulled up limping with that knee injury on November 22nd, 2013?

Marc is arguably a top 10 basketball player (on this planet) and has the accolades to really back the case for that ranking. Mike is possibly on the verge of an All-Star nod as he shines during a season with injuries to others considered to be elite point guards.

It's not necessarily an answer that you reach by looking at stats or records. As with any team sport, there will be a number of issues to weigh when considering the dynamic of losing players. Here's how some of our writers responded to the question of which player is more important to the Grizzlies:

That's a tough one. On one hand, we've got quantifiable data: the Grizzlies have struggled without Marc Gasol. We're 17-19 and it's going to take an extraordinary effort just to make the playoffs. On the other hand, Nick Calathes. The dropoff in PER from Marc Gasol (20.18) to Kosta Koufos (16.31) is significant (-3.87) and is noticeable on the court in ball and player movement, but the dropoff from Mike Conley (21.12) to Nick Calathes (6.42) is astronomical (-14.70). Also, for all of you who mocked me for wanting Kendall Marshall, he's playing well and his PER is 15.45. He's an actual legitimate NBA backup point guard.

I don't believe with Calathes at point that we're anywhere near .500. I have to say it's Conley, simply because the dropoff behind him is so huge.

I am going to have to go with Conley. That is not to say that Mike is better than Marc Gasol; on the contrary, I think that Gasol is still the best player on this Grizzlies team, even with Mike's recent run of dominance. Kosta Koufos, while not a top 10 NBA player, is a damn good back-up center and has tread water at the center position for the most part, as we all hoped he would. Ed Davis has also been serviceable in minutes at the 5. The Grizzlies are a .500 team with out Marc Gasol because of the depth of this Grizzlies front court.

Losing Mike Conley, however, would be catastrophic. Nick Calathes, while the book is still out on him, is most certainly not a starting NBA point guard at this point in his NBA career. Losing Conley would likely mean shipping out one of our bigs for a short term replacement, a la Kirk Hinrich or Steve Blake, and that is not the best use of the Grizzlies' assets. Not only would you lose a top-25 NBA player, you would lose a key piece to possibly getting out from under Tayshaun Prince's contract and creating more cap flexibility heading in to next season.

I'd go with Marc. He's the best player, even if the drop off isn't as big from Marc to other bigs as it is from Conley to Calathes.

We've seen what the Grizzlies do without Gasol, and at times it isn't pretty. The offense has to go through Conley in the pick-and-roll and Zach Randolph isolations in the post. Though not ideal, that can work with the complimentary pieces the Grizzlies have gathered - since Gasol's injury, they've produced a 104.6 offensive rating so far this season, 13th in the league in that period. More problematic is the defense, as without Gasol anchoring the middle, holes can crop up quickly in the strong-side overload strategy. Losing that help defender is invaluable, the Grizzlies' defensive rating without Gasol is 106.4 (yes, same as their offensive rating), 6th-worst in the league.

What if we theoretically lost Conley and had Gasol back? Well, the offense is going to plummet. Gasol can distribute from the high post, and that'll soften the blow some. However, Nick Calathes as a starting point guard isn't going to keep a team afloat. And I love him. Independent of the drop-off behind them, though, I'd argue losing Conley means less than losing Gasol. If we get a replacement-level/average point guard in place of Conley, I suspect we'd do better than with a center that generally makes the same positive impact in place of Gasol. My belief is Gasol has the ability to help the defense skyrocket into the league's upper tier. Conley is an elite perimeter defense, but elite interior defense is more valuable. To me, that's the difference. 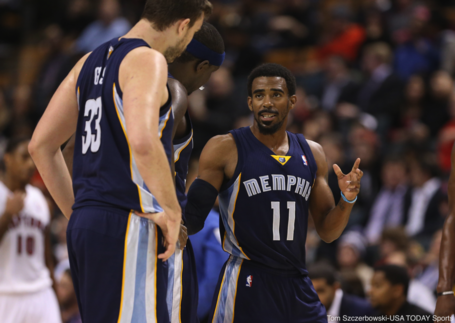 What do you all think?