With Big Spain's return seemingly imminent and the Grizzlies playing some darn good basketball of late, all important momentum is beginning to swing in the Grizzlies favor. Tonight, they will face a familiar foe in the friendly confines of the Grindhouse in the Oklahoma City Thunder. Regardless of the health of Kevin Durant, this Thunder team is well coached and will fight to the end. How can Memphis exploit the weakened Thunder and continue their winning ways?

For the OKC perspective, check out Welcome to Loud City.

The Memphis Grizzlies have been playing their best basketball since the storied four game sweep of California as of late, pushing the Spurs to the brink while defeating two teams with winning records in Phoenix and Atlanta. Marc Gasol participated in his first full practice yesterday, making updating his injury status from "Out" to "Day-to-Day" the best part of the week so far. The offense is clicking, the bench is playing consistently well and the roster appears to be gelling under the leadership of Head Coach Dave Joerger and star players Mike Conley and Zach Randolph.

Momentum is a funny thing. The Grizzlies were down and out just a little less than a month ago at 10-15 after a loss to the Dallas Mavericks. Injuries were crippling, frustrations were boiling over in Grizz Nation and all seemed lost as talk of tanking began among some fans and was discussed on this very site. A month later, the Grizzlies are on the opposite, and more positive, end of a momentum swing. Others are beginning to be affected by injury as the Grizzlies get healthier, and the impending return of Marc Gasol makes a run at the playoffs very believable.

Belief in this team will only continue to grow if they find a way to knock off Western Conference power Oklahoma City. They will certainly have their hands full with Kevin Durant, even though he will be playing for the Thunder tonight with an injured wrist, so he may be limited. No Westbrook and a weakened Durant certainly hurts your chances at winning, but the Thunder are well coached and disciplined in their system. They will not not go down easily.

Three keys to building more momentum with another win tonight...

Defend from the Outside In

Oklahoma City, in its 28 wins this season, shoots 48% from the floor and 36% from the three point line. Here is their team shot chart in wins. 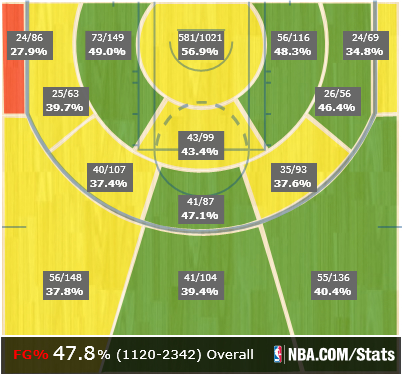 Impressive, especially from beyond the arc and mid-range. Now, here is OKC's shot chart in their losses, in which they shoot 42% overall and 29% from the three point line. 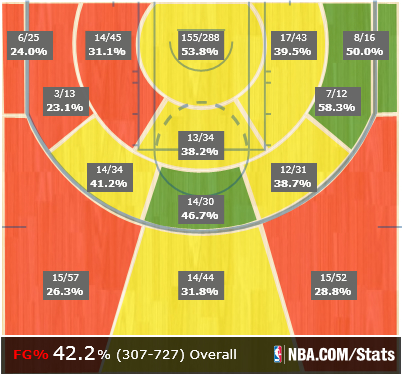 The Thunder shoot roughly the same in the paint in wins as they do in losses. The drastic drop off is in the mid-range and perimeter shooting. While Serge Ibaka has developed his offensive game, outside of him the Thunder really do not have a scoring threat that scares you down low. The strength of this Thunder team is in their wings; if you give up the inside some and force them into tough mid-range jumpers or contested threes, you improve your chances of victory drastically.

Memphis has to attack the glass. It can't only be the bigs, either; one wing every defensive possession needs to go gather up the ball, especially on long rebounds. Holding the Thunder to one possession consistently will be key toward a Memphis victory.

Take Advantage of Your Game

Memphis needs to play true to their style and dominate the glass to beat the Thunder.

The Grizzlies need to make sure that they do not fall into this trap. The Grizzlies are a tough match-up historically for the Thunder because of their physicality inside and and their ability to take advantage of turnovers. Memphis needs to make sure that they play to their strengths and that they stay true to their game. Get inside, penetrate and kick for three point opportunities, rebound the basketball and defend, all while doing it within your rhythm. Make OKC play to your strengths by controlling possessions and playing well off of screens and picks.

Even if Durant isn't 100%, this game is going to be close. Serge Ibaka and Nick Collison will likely create problems for Zach Randolph with their length and athleticism, and Mike Conley will have his hands full with Sixth-Man of the Year contender Reggie Jackson. However, the Grizzlies bench will rise to the occasion, using their energy and explosiveness to end the Thunder.