Memphis Grizzlies Film Room: Winning the Pick and Roll against the Rockets

Down the stretch of Friday's narrow win at Houston, the Grizzlies won two Pick and Roll possessions late - one on offense and one on defense - that decided the game. We take a look at how it happened.

Share All sharing options for: Memphis Grizzlies Film Room: Winning the Pick and Roll against the Rockets

Though the Pick and Roll is thought of as a "two man game," it really takes a collective team effort to execute and defend. Two possessions down the stretch of Friday's game illustrated this perfectly, and proved decisive in the Grizzlies narrow victory in Houston.

With 2:30 left in the game, Courtney Lee entered the game and the Grizzlies initiate their next possession using Lee as the screen man in a Point Guard - Shooting Guard pick and roll. Marc Gasol positions himself as a staggered secondary pick for Conley, who is about to dribble left to right.

When teams run Pick and Roll with two guards, it is a sure sign they are looking to exploit a specific weakness. In this case, the weakness would be the Rockets' wing defenders. Chandler Parsons and James Harden are offensive dynamos, but even on their best days, they are below average defenders. At their worst, they can be disinterested, bordering on lazy.

Chandler (I like to imagine he prefers being called by his first name only, so we're running with that) is at his best when he can use his length to cover his lack of foot speed. This may be why, in the below screencap, he chooses to jump out hard on Conley and force him wide. 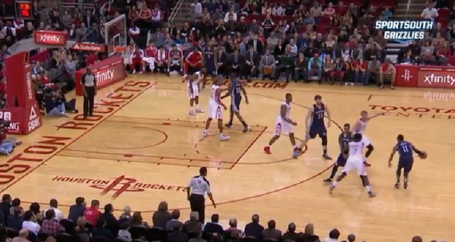 Chandler's gamble is clear: can he force Conley wide enough to give Conley's man, Patrick Beverley, time to fight through Courtney Lee's screen? As you can see, Lee stands strong against the man that broke Russell Westbrook last year, and Chandler is left in space longer than he wants. To Chandler's credit, he commits to the trap, using his long arms to force Conley wide. If he doesn't commit, and shows only briefly before recovering to his man, Conley would have the angle he really wants: to use Gasol, who has stepped out to the three point line, as a second screen to turn the corner.

But Chandler's job is not done. Committing to hedge Conley wide has left him with a ton of ground to cover. In the below screencap, you can see just how far Chandler has to sprint back to Courtney Lee, before Conley gets a passing lane. 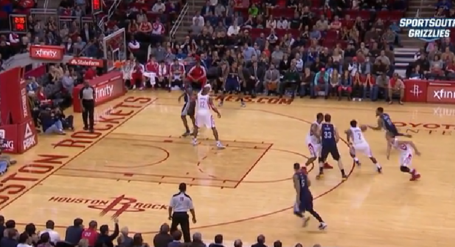 Chandler and Beverley's roles have now flipped. Now Chandler is the one scrambling to recover while trusting his teammate to buy him enough time. This is defense in the NBA: a mad scramble to close down space the offense is fighting to create. Beverley is attempting to do this, sprinting at an angle towards the baseline to cut Conley off before he can turn the corner, and that's when Conley makes the play. 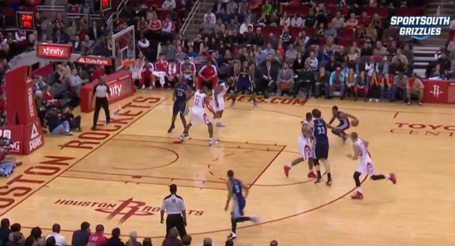 Sprinting left to right, like a Ferrari hurtling towards a red light, he stops. No, he doesn't stop. That would imply, you know, actually stopping. He shifts. He flows, like water would around a bend. Beverley, the bloodhound that he is, recovers in a second. But even a second is too late. In less time than it takes to blink, Conley has ripped the belly of Houston's defense open. He has Beverley in a trail position, and none of Houston's bigs have stepped up to fill the void. And ever since Chandler jumped out on Lee's screen, a clock has been ticking in Conley's head, counting down the precious seconds Chandler needs to chase Lee down. Conley knows he can't get there. He knows Lee is diving to the lane. He knows they've got a layup if he can just get the ball. And that's exactly what happens. 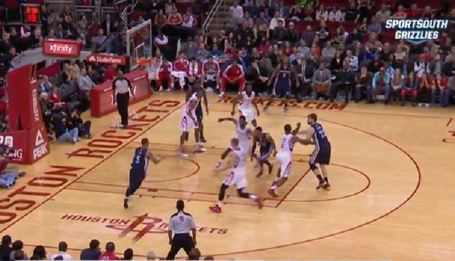 Hidden in this play is the positioning of Memphis' bigs. Dwight probably should challenge Conley or Lee, but so quickly has Conley switched the play, he must make a split second decision - literally - and he chooses to stick to Zach Randolph. Marc Gasol, lingering dangerously above the free throw line, cannot be left by his man either. Chandler is left on an island.

The second key play of the game occurred on the other end of the court. Down one with less than forty seconds remaining, the Rockets put the ball in Chandler's balefire-hot hands. James Johnson is the man tasked with stopping Chandler, a guy who, within the last hour, has splashed in ten straight three pointers. That's one three pointer for every taco in a Taco Bell Grande Meal. For everyone whispering about trading Tony Allen, these next few paragraphs are for you. 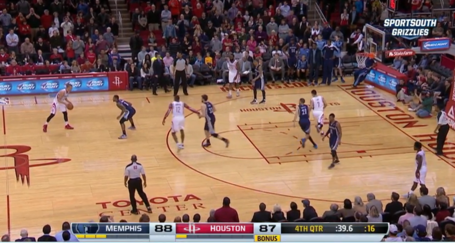 In the above screencap, Dwight Howard slouches towards Bethlehem glides towards the three point line to set a pick for Chandler, who dribbles left to right. Fighting around a Dwight Howard pick is like trying to take the long way around the mountain of Mordor, if Mordor could lean on you the whole time. 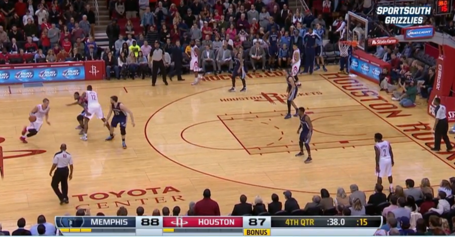 The pick is solid, and Chandler turns the corner. Marc Gasol has already slid into position. It has happened while we weren't looking, so seamlessly we forget he's seven feet tall, and dragging a leg only recently cleared to play basketball against the best athletes in the world.

The task is now Gasol's. Stop Chandler, the man ablaze, and you win the game. 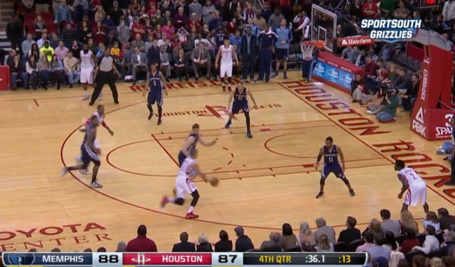 You can see above that James Johnson trails with Dwight rolling into the lane. He sees, probably, what any of us would see in this sliver of time: a center with a gimpy leg trying to keep up with an athletic young wing who's in the midst of a historically great shooting night. He doesn't see what is actually happening: Gasol flows with Chandler, mirroring him step for freaking step. Johnson makes his decision. In a different world, one in which the next few seconds go ever-so-slightly differently, Johnson's decision would cost the Grizzlies the game. Johnson tapes a cheetah to his back, and prepares to take flight. 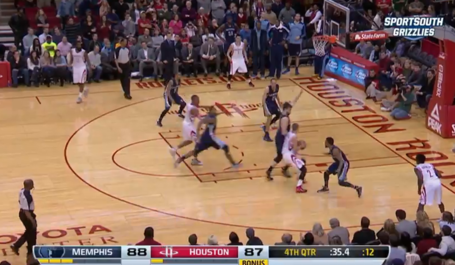 He soars. When in doubt, James Johnson does this. But this time he comes up short. In the below screencap, you can see just how poor this decision was. 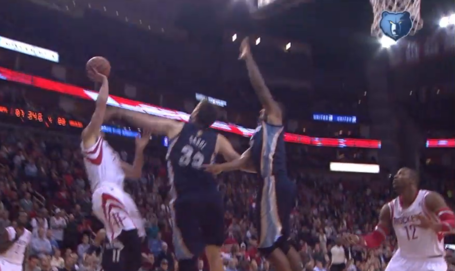 Gasol has forced Chandler away from the rim, shooting a desperate fadeaway. Gasol's hand is directly in front of Chandler's eyes. More perfect defense is impossible. If the Platonic form of defense exists, it would be the 7 seconds surrounding the above screencap of Marc Gasol, gimpy leg and all, looped in a perfect gif. Johnson hangs in the air as a footnote: what not to do when the reigning Defensive Player of the Year is doing his thing. You can see how far he has to go, attempting to block a shot over/around/through his 7 foot center. And his fatal error is apparent in the bottom right hand corner: he has left the trail man, Dwight Howard alone in the paint, and Chandler's hail mary of a shot looks destined to fall into Dwight's hands.

Do I blame Double J for this? No. When you make split second decisions, nobody shoots 100%. He chose poorly. A player ending roughly 10% of opponent possessions in either blocks or steals isn't exactly playing by-the-book defense.

Thankfully, another Grizzly, much-maligned, is there. I've been critical of Tayshaun Prince this year. But, on Friday night, in this one moment, he entered the breach and won the game for the Memphis Grizzlies. 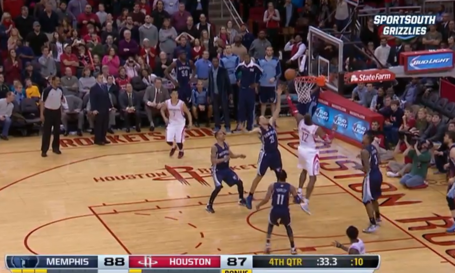 The above screencap is not a 50/50 ball. Howard is one of the best rebounders on the planet and has the better position. At best, it's a 30/70 ball. But Tayshaun jumps with Dwight. They bat the ball in the air, and both jump again. Prince gives up a few inches - both in height and in vertical leap - and he may lose this jump ball 9 out of 10 times. 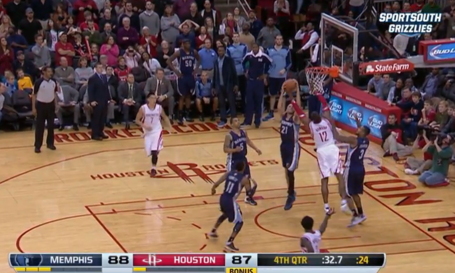 But not this day. Tayshaun comes down with the rebound. He covers his teammate's error. This is what we talk about when we say the whole is greater than the sum of its parts. The Grizzlies won this game together.