Nick Calathes played terrific in the second game of a back-to-back against the Houston Rockets. He showed composure and was a catalyst for the second unit, leaving one to beg the question: Is Calathes finally turning the proverbial corner?

Nick Calathes has had a rough go of the NBA thus far. The adjustments have been vast and his ability to make them is not yet apparent. In a passionate basketball city like Memphis, fans are quick to embrace players that succeed. By the same token, they are quick to hold a player culpable if he is struggling.

Calathes has received heaps of blame and criticism this season, and deservedly so. He has struggled to orchestrate the second unit offense, demonstrating a propensity to play like a beginning flute player rather than the conductor the Grizzlies need him to be.

Flashes of Calathes' ability have been seen throughout the season, but these flashes occur far too sparingly. Several games in a row will pass where the rookie Greek point guard struggles and fails to make his presence felt on the court. Fans, and seemingly Joerger at times, are ready to write him off. But then Calathes has a game like he did against the Houston Rockets, and hope is renewed.

This is part one of a two part series breaking down how Calathes left his mark and helped the Grizzlies dominate the Rockets. Without further ado, here's part one.

Phase One - Getting Steals

This next play is a prime example of Calathes' defensive prowess. As James Harden brings the ball up the court, notice where Calathes is positioned. He's almost perfectly equidistant to Harden and his man, Patrick Beverley. Positioned this way, Calathes can help on Harden and stop the ball if he decides to bring the ball over half court and try to explode to the right. All the while, he can keep his eye on Beverley, making sure he's not performing an action that will leave him out of position. The most important aspect of Calathes positioning though is the opportunity he is presenting himself with to come up with a steal if James Harden tries to make a pass to his backcourt mate that appears to be there. 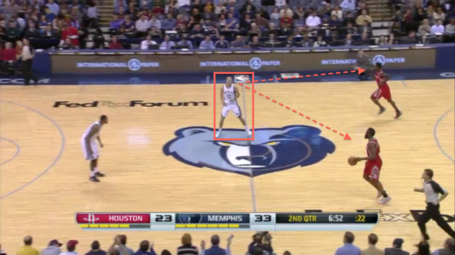 The next move for Calathes is a simple read of Harden's eyes. Depending on what Harden is showing, Calathes can either continue to backpedal into defensive position on Beverley if Harden leaves his eyes focused forward on the basket, or he can step up and take away the passing lane if Harden's eyes indicate a pass. On this play, it's a dead giveaway that Harden is going to pass before he even crosses halfcourt. He's always looking at Beverley, and Calathes knows it. The second Harden picks up his dribble and looks right, Calathes begins to pounce. 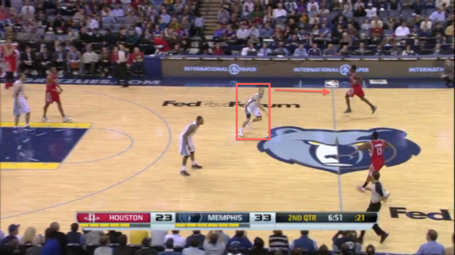 By this point, the steal is a formality. Beverley was not even looking for the ball when Harden delivered it, and all that Harden can do is self-reflect and realize he messed up. Notice Calathes shooting the gap perfectly after lulling Harden into thinking an easy pass to Beverley was there. 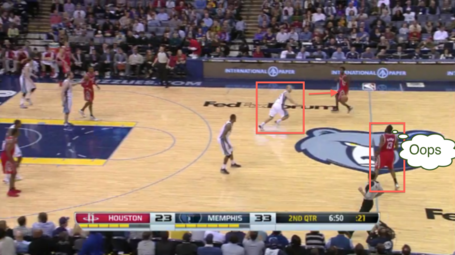 After playing the ball and his man perfectly, Calathes comes up with the steal and heads the other way. It was an excellent defensive play helped along by a lapse in judgment by Harden. 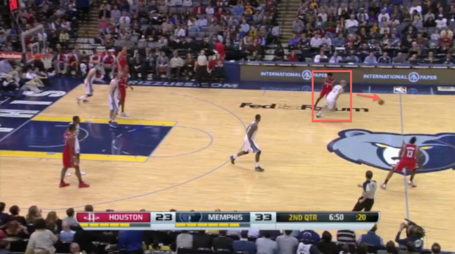 This play was not the only instance of Calathes shooting the gap against the Rockets Saturday night. He did it once more against Jeremy Lin, demonstrating excellent defensive instincts. At 6'6", his length is an asset as well on the defensive end of the floor. It makes him that much more dangerous when disrupting passing lanes.

Calathes also played excellent help defense at times in the game against the Rockets. This next play is an excellent example of that.

Harden receives the inbounds pass after a made Grizzlies shot. Courtney Lee is guarding him. 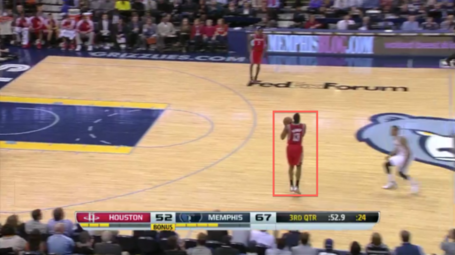 As Harden receives the ball, Courtney Lee shoots up to get in his face and possibly deflect the ball for a steal. Harden outmaneuvers him though, and after swinging the ball above his head to the right side of his body, he takes off down the right side of the court. Lee is beat at this point, and Calathes smartly realizes it. He begins sliding to his left to cut off Harden's dribble. 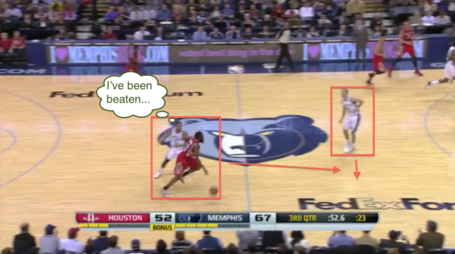 Harden sees Calathes made it to his spot to cut off the dribble in plenty of time, and he slows his dribble down. 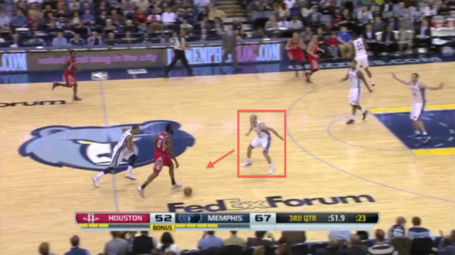 Now, when Harden slows his dribble down, Calathes knows that the next logical step is a pass, and he sees an opportunity for a trap that could force a turnover. Also of note is that Harden is dribbling with is off-hand, making him more vulnerable to a steal. Calathes begins to leap towards the ball for a steal when the ball is hitting the court on Harden's dribble, which is just the right time because it gives Calathes the biggest window to come away with the ball. 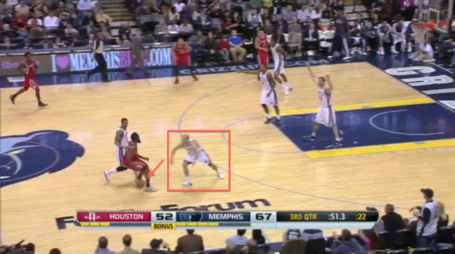 Calathes pokes the ball loose and heads down to the other end of the court. The result of Calathes' savvy help defense is two easy points for the Grizzlies. 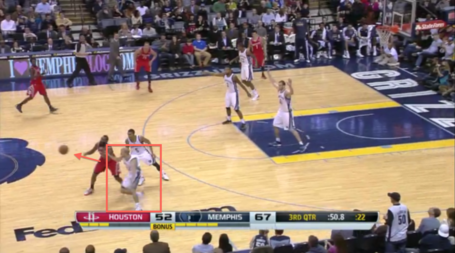 Below, check out video of all three of Calathes' steals from Saturday night's game against the Rockets.

This can't always be said for Calathes, but against the Rockets he was just in the right place at the right time. Without the ball in his hands, he demonstrated the ability to find pockets of space that led to easy buckets, which is exactly what Joerger wants. Movement off the ball is key to offensive success for Memphis.

Calathes found these pockets of space on two plays in particular. First, he found himself wide open under the basket after a broken play. Here's how.

After a fast break went awry, the ball ricocheted out to the three-point line, where Courtney Lee retrieves it. 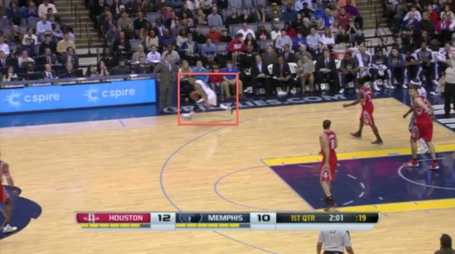 At this point, Calathes realizes nobody sees him behind the play, and he begins to slide baseline under the rim as Lee throws a pass to Randolph in the post. 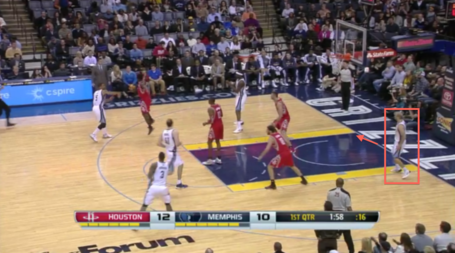 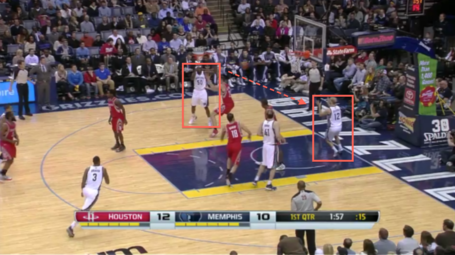 All Calathes has to do is finish, which he does with an easy reverse layup. This play is never made if Calathes isn't actively looking for a pocket of open space to set the Grizzlies up for an easy bucket. That's excellent awareness and understanding of what needs to be done by Calathes. 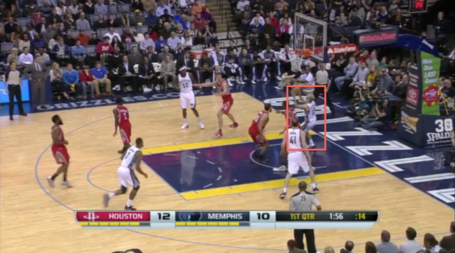 On this next play, Calathes loses the handle in transition and wisely decided to back it out. 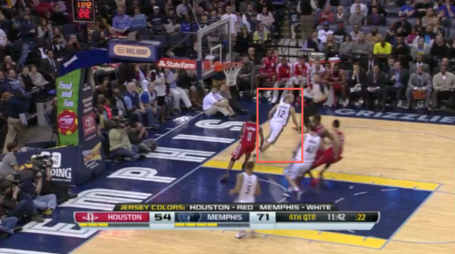 Calathes circles the ball back out to the top of the key to get another play started. That's a savvy move. There was no need to force the fast break when it wasn't there anymore. 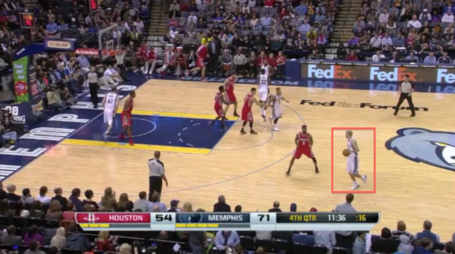 Then, Calathes heads back to the right as Courtney Lee sets a ball screen. This gives Calathes an easy pass to James Johnson on the right wing. 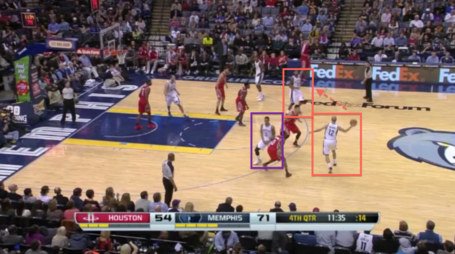 After Calathes releases the ball, he immediately gears up for his next action, which is a cut to the paint. To free Calathes from Jeremy Lin, Koufos comes up and sets a terrific back screen. 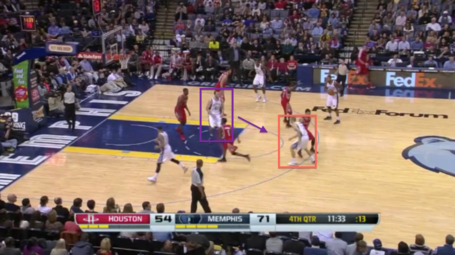 Calathes makes his cut to the lane, and he finds himself wide open. James Johnson times his pass just right and hits Calathes right as he reaches the rim. 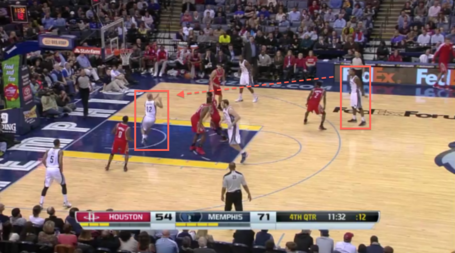 As usual, the last thing to do on the play is for Calathes to finish. If Calathes can play within the offense in this capacity, his value will increase within the second unit a good deal. 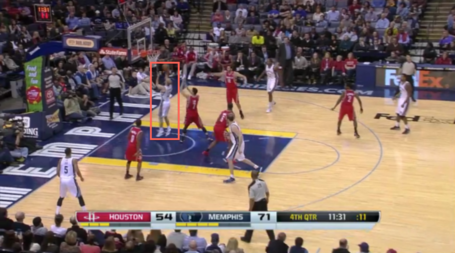 For video of the two diagrammed plays, watch below.

That's it for part one of the two part series breaking down exactly how Calathes helped the Grizzlies so much against the Rockets and renewed everyone's hope. For the next two phases, head on over to part two.