How the Memphis Grizzlies Got Their Groove Back

The night is always darkest before the dawn. In the case of the Memphis Grizzlies, truer words were never spoken. Tanking, trading, the depths of despair were all regular occurrences for the Beale Street faithful just 6 weeks ago. Now, the Grizzlies are riding high, 9-3 in their last 12 and 2 games outside of the playoffs. How did they get here, and how can they stay here for the stretch run?

Share All sharing options for: How the Memphis Grizzlies Got Their Groove Back

Do you feel that?

That is a shift is the landscape happening under the feet of all those who follow the NBA. It's a movement back on to the bandwagon of the Memphis Grizzlies from multiple national NBA writers, including this tweet from CBSSports.com Matt Moore in response to Grizzlies fan (and solid Twitter conversationalist) Jonathan Lindsey this past Saturday night.

I'm in. they're making the playoffs. RT @Stumpbuster9: @HPbasketball . . . so about those Grizzlies *whistles walking away*

Yes, how about those Grizzlies? The Grizzlies that many wrote off not too long ago, too injured, too flawed, are now climbing back up the Western Conference standings as other teams begin to snap back to reality. With the weekend sweep of the Houston Rockets, the Bears of Beale Street are now even with the Dallas Mavericks in the loss column, 2 games behind of the 8 seed in the playoffs with 40 games to play. They are 5 games behind the 5 seed Houston Rockets, who...were just swept this weekend by the Memphis Grizzlies.

So, the winds of change are flowing through the Mid-South as the Grizzlies get back to their winning ways. It begs the question, however...how did we get here? How did the Memphis Grizzlies go from dead in the water just 17 games ago, 10-15 after a loss to the Dallas Mavericks, to the hot pick to spoil the playoff party of the Phoenix Suns or those same Mavericks who had beaten the Grizzlies so decisively that December evening?

There were three key players during this stretch of success that either joined the team via trade, increased their role or returned from injury. These players helped establish three positive trends that were weaknesses during the worst of times. In order for the good times to continue to role, these players and these trends will have to continue to make impacts.

In that loss to Dallas a little more than 5 weeks ago, Jerryd Bayless started at point guard and was 3-13 shooting the basketball. Jerryd's struggles as a Grizzly this season were well documented, and while he had a great run at times last year he did not fit this model of the Grizzlies roster. So, Jason Levien and the rest of the Grizzlies front office completed a deal with the Boston Celtics, shipping Jerryd out in exchange for Courtney Lee. Under performing and over paid in Boston, some folks in Memphis were skeptical of the acquisition.

Lee's arrival, however, has revitalized the Grizzlies offense, and Lee's career in the process. As a member of the Grizzlies Courtney Lee has played in 9 games, starting 7 in place of the injured Tony Allen. In those 9 games, here are his numbers as compared to his career statistics according to ESPN.com

In short, he is shooting the lights out at the moment. The sample size is small, and the return of Tony Allen in the next week or so will likely cut in to his time on the court. However, Courtney Lee's offensive game is unique and extremely valuable to this Grizzlies roster. Whether it is as a sixth man or as a starter Lee has shown to be exactly what the Grizzlies needed; a perimeter wing who can defend his position as well as score the basketball.

Lee has also helped the team improve overall offensively. For example, look at this shot chart which covers the Grizzlies' past 10 games, 9 of which Lee was a part of. 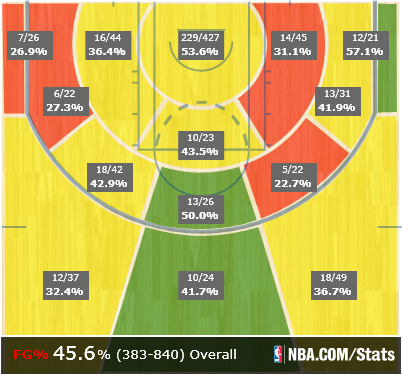 Compare that to their overall shooting over the entire season. 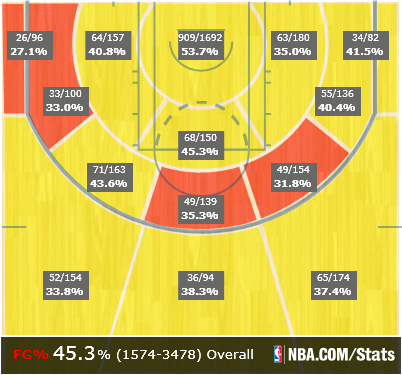 The percentage overall is about the same, but notice the green spots in the 10 game chart. Above average shooting from beyond the arc, both in the corner and at the top of the key. It isn't just Lee who is scoring better from range since the season started; Mike Conley has also improved his long ball percentages. In the month of January, Mike Conley is shooting 45% from three, 8 percentage points higher than his season average.

Lee's arrival signals an improvement for the offense that has been long awaited; the ability to consistently shoot from mid-range and beyond. This improvement will pay huge dividends long term for the Grizzlies; the paint will remain open for Zach Randolph, allowing for him to continue to grab monstrous rebound numbers and score in close. When the time comes to look back on the 2013-2014 season, Courtney Lee becoming a Memphis Grizzly may well be viewed as the move that saved the season.

On that night in Dallas, James Johnson was beginning to make his presence known as an all-around "thing-happener." He had 11 points, 2 rebounds, 2 assists and 2 steals in 20 minutes of playing time. Johnson has a flare for the dramatic, throwing down windmill jams and draining threes to tie games. Dr. JJ's main area where he has helped the Grizzlies during this 9-3 run, however, is with perimeter defense.

In the month of January, opposing teams are shooting 43% overall and 33.2% from three, the lowest they have shot all season. The Grizzlies are also averaging almost 6 blocks per game during this January stretch, above the 4.5 per game average of the total season so far. Marc Gasol's return has a good bit to do with this, but James Johnson's length and athleticism has also led to the increased block party. He has also had a tremendous impact on the lack of consistent perimeter shooting from opposing teams, Chandler Parsons' performance Friday night in Houston not withstanding.

Take this screen shot series gathered from NBA.com/stats, for example, which prompted Rockets analyst Clyde Drexler to say that he wishes the Rockets had found a way to make roster room for the dynamic Johnson. 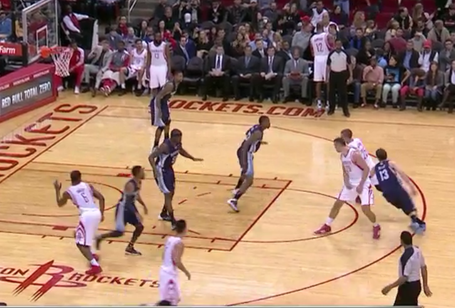 Chandler Parsons comes around a pick, which Mike Miller tries to fight over the top of. With Miller being a step behind, Ed Davis does a good job hedging off Parsons' drive attempt. Notice Dr. JJ at the top of the screen; he does not need to look over at Harden, he knows his position and is able to focus his help on Parsons. 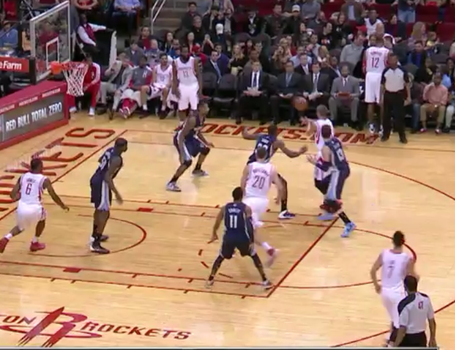 With Ed defending the roll man off of the pick and blocking Parsons' lane to the basket, he kicks out to James Harden, who he believed had a chance at a quick corner three. Johnson's positioning has not really changed, however; he has great placement to help if Parsons attacks the rim, plus is athletic enough to get to Harden on the kick out from Parsons. 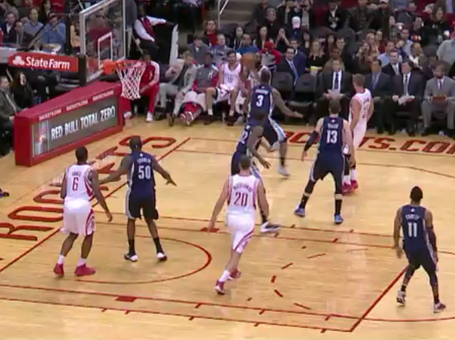 Johnson only has to take one step to get in to position to block Harden's shot. Johnson's defensive presence on the perimeter is outstanding here; he forces Harden to commit to the shot and does not honor a possible pump fake, plus positions himself to where if Harden were to drive he had help in the form of Ed Davis, Zach Randolph and the baseline, which can serve as a sixth defender. 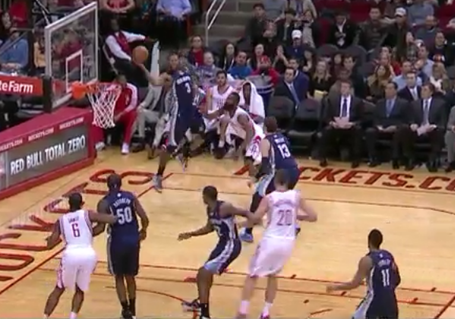 Johnson blocks the shot. His basketball I.Q. is on display here in a way that can be underrated at times. Instead of smacking the ball out of bounds for dramatic effect, giving the ball back to the Rockets, he blocks it enough to allow himself to regain possession for the Grizzlies. A turnover for the Rockets, and another scoring opportunity for the offensively challenged at times Memphis Grizzlies.

When Tony Allen returns, he could take a lesson from Johnson's help defense. Less overcommitment and more positioning will do a world of wonders for the perimeter defense of the Grizzlies going forward.

Big Spain, on that rock bottom evening against the Mavericks, was out of the line-up still nursing his injured knee. His presence defensively was missed quite a bit; the Grizzlies struggled mightily on that end of the court without the reigning Defensive Player of the Year, as Chris Faulkner did a great job outlining here. Defense has been the Grizzlies calling card for 3 years now, and Gasol is the cornerstone of that philosophy.

However, where Marc will help the Grizzlies continue their climb up the standings even more will be on offense. Marc is currently under performing on that end of the court, shooting 39% from the field in the 6 games since his return. Here is what the shot chart looks like. 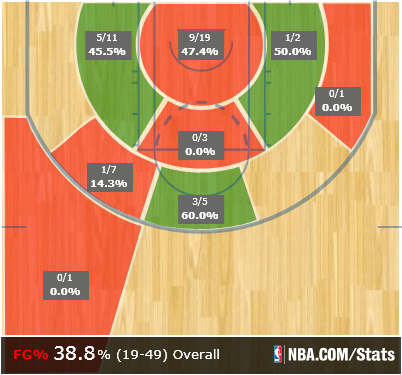 Certainly a small sample size, but evidence that Marc is still finding his own personal groove. Compare this to his season shot chart from last season. 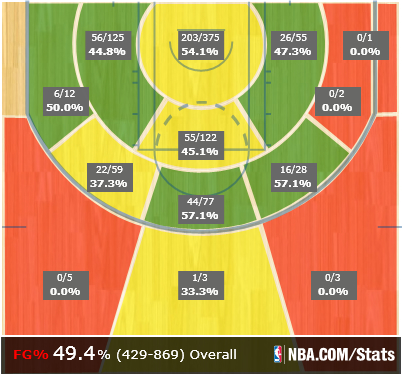 As Marc Gasol rounds back in to form, and especially as those shots from the elbow and free throw line begin to fall consistently again, the full power of the Grizzlies offense will be unleashed.

Imagine the following closing out games; a James Johnson block of a three point attempt, followed by a high-low set with Zach on the block, Marc on the elbow. Mike Conley can play off of a Gasol pick, driving to the basket or dishing to Zach if Randolph's man over helps. Add on a Courtney Lee and James Johnson waiting on the perimeter for the spot up three or cutting to the basket themselves, and the possibilities are endless.

Happy days appear to be here again for Grizz Nation. As long as Courtney Lee, James Johnson and Marc Gasol continue to score the basketball, defend the perimeter and round into form heading into the second half of the season, Memphis will once again enjoy playoff basketball come April, May and hopefully June.

Next Up In NBA