The Nuggets literally can't win a game and the Grizzlies are wildly inconsistent and up and down. Can the Nuggets start their turnaround or will the Grizzlies build upon their solid victory just a night ago?

Psychological Carry Over from "Game 1"

The Grizzlies spanked the Nuggets less than a week ago in Memphis, and maybe that gives the good guys an edge heading into the second contest of the season between these two Western Conference foes. The Nuggets, who have lost eight straight, are clearly struggling to regain their winning ways, and that can start to take a psychological toll on a team.

Giving up 120 points to the Grizzlies, a run of the mill offensive team, the first time these two teams met won't instill much confidence in this floundering Nuggets squad. The Nuggets are not that bad of a defensive team, but when a team is struggling as they are, problems get compounded. It will be hard for the Grizzlies to dominate the Nuggets as they did last time, but the men from Beale Street will certainly have the edge after the first meeting and given the current trends of the two teams.

Denver is mediocre at defending the post, and the Grizzlies, even without Marc Gasol, work best when they are facilitating the offense through the post. Memphis scored on 7 of 12 post up opportunities when these teams met for the first time this season. Most of that production in the post came from Zach Randolph. J.J. Hickson did all he could do to slow Z-Bo down in the first meeting, but Randolph is ultimately too strong for Hickson, and when his rainbow jumper is working as it was that night, there's not a thing Hickson can do about it.

Randolph has helped carry the offense as of late, and if things flow through him early, things go better for the Grizzlies more often than not. However, he isn't the only big men worthy of praise. Ed Davis has played well recently, and his post moves put his current level of confidence on display. Coming off of a strong performance against the Suns, Davis' confidence will only be bolstered further. Now, he gets the chance to take advantage of the Nuggets post defense. He should be licking his chops.

Kosta Koufos will not be left out of this conversation either if he can help it. Playing against his old team, look for him to play with a little extra giddy up that will hopefully propel him to impose his will down low. Koufos doesn't have to be the strongest post player to excel against this Nuggets team. They struggle with giving up offensive rebounds, (18th according to MySynergySports) and Koufos specializes in gobbling them up.

It's no secret that Lawson is one of the quickest basketball players in the entire world. He excels at scoring as the ball handler in pick and roll situations, and he was able to hurt the Grizzlies several times less than a week ago when they failed to cut off his drive to the lane after he zipped past the pick man. If the Grizzlies get out and ice Lawson aggressively forcing him to dribble parallel to the baseline, that greatly limits his effectiveness. Lawson is far less dangerous when taking a long two than he is when he gets into the painted area. 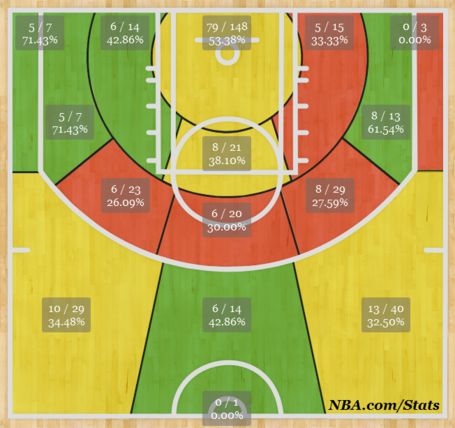 After playing what was a wildly inconsistent game against the Phoenix Suns that ended in a win just a night ago, the Grizzlies will look to carry that momentum forward and keep the ball rolling. Win and they've jumped the Nuggets in the Western Conference standings. They just need to focus on overcoming one team at a time to try to claw their way back into the playoff picture. Coming off a big win and also knowing that they slaughtered this same Nuggets team less than a week ago should go a long way towards propelling the Grizzlies to victory. If the Grizzlies go to Z-Bo early and often in the post, get on the offensive glass, and play stingy defense on Ty Lawson limiting his penetration, this game should tilt in Memphis' favor.