The Memphis Grizzlies opened the new year with some wheeling and dealing on Sunday as they traded combo guard Jerryd Bayless to the Boston Celtics for Courtney Lee. The 6'5" shooting guard can defend his position, shoot the three consistently and provides some much needed energy to the roster. His arrival signals a push for the playoffs that hopefully will be anchored by a returning Marc Gasol in the coming days.

Share All sharing options for: How Courtney Lee Impacts the Memphis Grizzlies

Jerryd Bayless was not longed for this new Grizzly world.

Chris Faulkner did a wonderful job thanking Jerryd for his faithful service to Memphis here. Jerryd was a solid player for the Grizzlies who had several memorable moments and filled a niche as a fearless player who was willing to fight to the end for his team. However, for the Grizzlies as currently constructed, he did not fit. He was too scoring minded to be the back-up point guard and too small and inefficient shooting the ball so far this season to be the back-up shooting guard. Especially with the injury to Quincy Pondexter, something had to give.

It gave in the form of the trade Sunday night, sending Jerryd to the Boston Celtics in exchange for Courtney Lee. Lee and the Grizzlies front office have history; Lee was a former client of Director of Player Personnel Stu Lash and Grizzlies CEO Jason Levien bask in their sports agent days. This move is more than a reunion of old colleagues, however. Courtney Lee fills multiple needs for a Grizzlies team with several weaknesses that need bolstering.

In particular, three point shooting. Jerryd Bayless is shooting 29% from three this season. Outside of Mike Conley and Mike Miller, you would be hard pressed to find any Grizzly who you would be comfortable with shooting multiple threes per game. Jon Leuer is coming along nicely as a stretch four, but more consistent shooting out of wings from beyond the arc was necessary. Here is Jerryd's shot chart for the season so far. 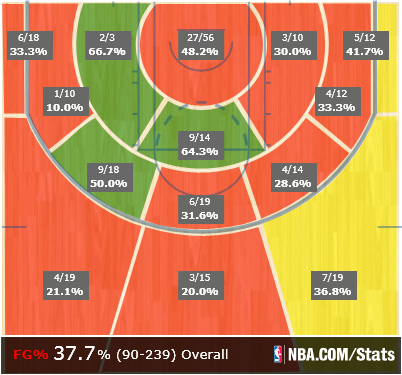 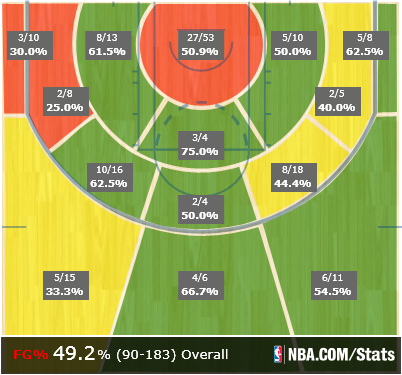 Even with 50 less shots, it is clear; Lee is a much more efficient scorer than Jerryd Bayless is right now. His proficiencies from three in particular is where he will shine for these Grizzlies. Lee is shooting 44% from three for the season and is a career 39% three point shooter. While his outside shooting will be key, his offensive game is deeper than just being a long range assassin. He attacks the rim and while he could improve in that area, it shows aggression and an activity level that will benefit the Grizzlies.

The Memphis Grizzlies have a distinct mentality. Fans affectionately call it "Grit and Grind." Courtney Lee understands this. Listen to the first 20 seconds or so of this video clip, an interview with Lee after a Celtic victory over the Bobcats.

Sounds pretty Gritty. A player who understands hard work, who welcomes challenges and accepts the idea of effort being just as valuable as talent. This shines in the following highlight reel of Lee's season last year.

Even though the perimeter shooting is nice to see, the clips that stand out are the ones of attacking the basket, of understanding spacing and playing off of screens, of defending and creating steals and playing off of fast breaks. Lee can fit into any mold, play almost any style. Most of all, he appears to be willing to put in the necessary effort to be the best player he can be.

How very Memphis of him.

Courtney Lee will need to use some of that effort as a part of a Memphis defense that has a defensive efficiency rating of 105.5, good for 24th in the Association. Memphis also ranks 25th in the NBA in opponents shooting percentage and 20th in opponents three point shooting percentage. Whether it was Jodie Meeks, DeMar DeRozan or any other wing, the Grizzlies have especially struggled defending perimeter players early in the season.

Lee will be called upon to guard multiple positions and strengthen the perimeter defense of the Grizzlies.

Lee will help with this. At 6'5" he is taller and longer than Jerryd Bayless and will be able to defend his position of shooting guard better than Jerryd could. Lee also has the athletic ability to defend smaller guards or slightly taller small forwards, allowing for more versatility across the perimeter than Jerryd could provide. Lee can fill the Quincy Pondexter role nicely on the defensive side of the floor. He is a player who can defend multiple positions and allow for other players to rest or defend lesser offensive talents that they may have had to guard before with Jerryd on the floor.

So Lee will spread the floor, he will create energy with his minutes and will bolster the faltering Memphis perimeter defense. Courtney's arrival will also impact other aspects of this Grizzlies organization moving forward, such as the following...