How does Courtney Lee affect the Memphis Grizzlies' salary cap space this summer?

By sending away Jerryd Bayless' expiring contract for Courtney's Lee three-year, $16.4 million deal, the Grizzlies have really cut into their cap space this summer. Here's a look at the salary totals with Lee on board.

Share All sharing options for: How does Courtney Lee affect the Memphis Grizzlies' salary cap space this summer?

You'll find very few people that will tell you Courtney Lee isn't an upgrade over Jerryd Bayless and his on-court contributions. Bayless is slumping massively on offense, shooting 37.7% from the field and 30.1% from three while Lee is shooting 49.2% and 44.2% respectively. This is a bit extreme compared to both players' career norms, but there's a clear difference in efficiency between the two even using those career stats. Above all, the Grizzlies will be grateful just to add a consistent three-point shooter.

That's not the concern with this trade, though. While it raises questions about the role of back-up point guard, that can be addressed relatively quickly through free agency or another trade. The Grizzlies will (seemingly) be glad to deal with that if they can swap Bayless for Lee.

Instead, the problem is one that the Celtics have been trying to extricate themselves from for quite a time now: the ugly three-year, $16,350,000 contract that Lee is attached to. 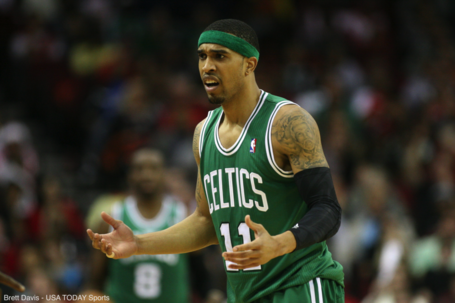 From a value standpoint, it's hard to say that Lee is a $5.5 million per year player. Through the duration of his time spent with this Celtics after they acquired him in a sign-and-trade deal in 2012, Lee's averaging just 22.6 minutes per game across 108 games. In 30 games this season, that's all the way down to 16.8 minutes (though that also speaks to the Celtics' direction as a team). Lee can make threes and defends smaller guards well, but he has trouble with bigger wings and doesn't wow statistically. CelticsBlog's Kevin O'Connor was pretty quick to call him a disappointment.

In reduced minutes, Lee's been playing better this season than he has in a long time. It stands to reason the Grizzlies could make him at least a 20 minute per game player. They're in need of three-point shooting, and being able to roll back the minutes of veterans like Tayshaun Prince, Mike Miller and Tony Allen will help them in the long-term. His value for the Grizzlies will be a bit higher than it was for the Celtics. Still, it's hard to see the Grizzlies are getting fair return for all of the money they now owe Lee.

And that can be okay. Players can play well while being paid more than they might deserve. As long as the team can find a way to win the games it needs to, it can live with a player on a bad contract. Lee has the potential to make the kind of impact for the Grizzlies that they can survive paying him MLE (Mid Level exception)-money.

However, this does leave the Grizzlies in a bit of a sticky situation when you consider the looming offseason. They've toed the luxury tax for a long time, case in point being the salary dump with the Cleveland Cavaliers almost a full a year ago (that happened to net us Jon Leuer!). Now, instead of cutting $3,000,000 from the books this offseason with Bayless expiring, they've actually retained that amount for two more seasons while also paying an additional average of $2,450,000 per year.

(Disclaimer: I've seen a few people on Twitter that have the idea that by using a trade exception to absorb Lee's contract, he won't count against the salary cap or the luxury tax. That's not true, as what the trade exception does here is allow the Grizzlies to take on more money than they could normally do in a trade while already over the salary cap.)

How does that affect the Grizzlies' cap situation this summer? Assuming they receive just Lee and ship out just Bayless, I've crunched the numbers below (salary numbers courtesy of ShamSports.com, salary cap and luxury tax figures courtesy of the NBA's own projections):

There are a couple of notes I should add. Recent rumors have pointed towards Zach Randolph opting out of that big $16.9 million year ahead of him in an attempt to secure one more multi-year contract. The Grizz probably make a move to add a point guard, but whether a trade or a signing, I'm going to assume it's negligible long-term (either that they make a trade for similar salary or sign a player to a one-year contract) simply because I can't do any better with my prediction. In a similar vein, I haven't bothered to account for any trades that might happen this season (I do think more will happen, but that's beside the point) because those are practically impossible to predict with any accuracy.

(editor's note: regardless of the results of a trade, this is still pertinent information because it's off of what any potential trades will be based for the Grizzlies- CF)

It'd also be prudent to add on the Grizzlies' first round pick this year to the total for 2014-15. Because the CBA forbids teams from not having first-round picks in upcoming consecutive seasons and the Grizzlies owe the Cavaliers a protected 2015 first-rounder, they can't trade their first round pick this year. Also, it'd probably be pretty dumb to considering the lack of standout youth on the current roster. If the Grizzlies pick 10th, where they're currently slated to pick at the time of writing, then that pick will have a first-year salary of $1,998,200.

Want to know how much cap space that leaves the Grizzlies to go after free agents with this summer? $7,803,958.

Replacing Zach Randolph is going to be hard to do with just that amount. The Grizzlies can go over the cap to retain Z-Bo with his Bird Rights, but if he's been rubbed the wrong way by trade rumors and gets a convincing offer elsewhere, he could easily leave the Grizzlies in a tough situation to work from. Though this offseason's power forward market has some appealing elite-level guys like Greg Monroe and Pau Gasol (not to mention Chris Bosh, Tim Duncan and Dirk Nowitzki, though they probably aren't leaving), they'll be out of the Grizzlies' price range. After those guys, the market thins quickly and names like Andray Blatche, Jordan Hill and Patrick Patterson lead the way. Hardly ideal, especially when trying to replace a player of Randolph's caliber.

Even if the Grizzlies can find a way to get a suitable Z-Bo contract or Z-Bo replacement, they'd still have to fill out their roster through free agency with limited cap space. Courtney Lee fills a need as a three-point shooting wing, but the Griz will be losing three key bench players in Mike Miller, Ed Davis and James Johnson. Eventually, they'll need a long-term back-up point guard too. They have enough depth in talent already to allow some of those guys to walk and they should draft high enough to be able to pick a player ready to contribute, but that's more of an alibi than it is a reason for doing something.

Now, it's unlikely that the Grizzlies will stand pat with their financial situation as is. Maybe they think they can get along with their odds of re-signing Randolph via his Bird Rights and filling out their team as needed with the means available to them while above the salary cap, though I doubt that's the case. Either way, a cost-cutting trade might be on the way. Having taken on Lee's contract in exchange for Bayless' expiring trade, the Grizzlies might make another trade to shed salary and move the needle back in their favor in terms of cap flexibility.

A Salute to Jerryd Bayless

We put together a gallery from Jerryd's time in Memphis, TN. He'll be missed by much of the Bluff City!

How Courtney Lee impacts the Memphis Grizzlies on the court.

A Salute to Jerryd Bayless A Grizz-Lee Acquistion

Tayshaun Prince has to be seen as the most likely candidate to be traded in such a case. He's a non-essential member of the Grizzlies making $7 million plus per year. The Griz can supplant him in the starting lineup with James Johnson, Mike Miller or a player received via trade. By packaging him with Ed Davis (there will be a surplus of big men when Marc Gasol returns) or another asset to give other teams a reason to take Prince on, the Grizzlies might find a way to nab a hefty expiring contract. Maybe the 76ers would give up Evan Turner or the Utah Jazz give up Richard Jefferson. There's an ocean of difference between the two, but it's a reminder that the Grizzlies will be beggars more than choosers.

If we presume Pau Gasol's market value to be $11-14 million per year (I'm not confident in my ability to predict the free agent market, but it seems a reasonable range), then the Grizzlies might be able to clear enough salary that they can swing on Other Gasol regardless of whether or not Randolph does choose to leave. It seems a reasonable bet that Pau would have interest in playing with Marc, and even though the Grizzlies won't have a shot at Greg Monroe, they should have a good enough shot at signing either Pau or Z-Bo that they probably won't have to pick from the next tier of free agent power forwards.

There's also an alternative route for the Grizzlies to insure themselves from being left without one of those star power forwards, although it will, for all intents and purposes, force them into the tax just to sign them. If the Grizzlies can convince Randolph to stay, they can sign him in the offseason using his Bird Rights, which allow a team to go over the salary cap to re-sign a player. If they don't like their shot at getting Randolph to stay, they can also try to make a trade for Pau Gasol and his Bird Rights (which do transfer via trade). It'd likely have to be a three-team trade involving a team willing to give up something the Lakers want because it's hard to imagine they'll want Z-Bo, but it could be doable.

Tax dodging will be difficult without any more moves. $7.8 million in cap space isn't much to work with, and the Grizzlies will have work to do. The bright side is, the Grizzlies should already have the means to clear salary. It won't be easy to find teams willing to take on additional salary to help the Grizzlies clean up their own cap situation, but they do have the sweeteners necessary to accomplish it.

The Lee-Bayless trade probably signals more moves on the way for the Grizzlies, who will now have to offset adding Lee's contract to the books. It feels like trade activity is beginning to ramp up around the league, with the Cleveland Cavaliers and the Chicago Bulls swapping Luol Deng and Andrew Bynum while many other teams are named in trade rumors. The trade deadline is February 20th, folks. This one could dictate what the Grizzlies do in the summer, and ultimately, what they look like in 2014-15 and beyond.