Grizzlies vs Spurs Recap: Knowing When You're Wrong

Sometimes, as hard as it is to say, you've got to reach deep down within yourself and admit when you're wrong, and when you need to say your sorry. After tonight, it's officially that time.

Share All sharing options for: Grizzlies vs Spurs Recap: Knowing When You're Wrong

Never respect a man who can't admit when he's wrong. That's a lesson my mom has tried to instill in me since a very young age, and even though I struggled with it growing up, something I've tried to take to heart. There are several phrases you hardly ever hear, things like "Man, I can't believe it's already Tuesday!" or "I would totally spend that much on Nickelback tickets." But probably the two least used phrases in the English language are "I'm sorry," and "I was wrong." Right now, I think I need to say both of those things.

I've been a Grizzlies fan on and off since they moved to Memphis, but I jumped in with both feet the year OJ Mayo was drafted, and have been all in ever since. My two other favorite professional franchises, the New York Giants and the Atlanta Braves, had long dominated my sports life, but this rag-tag group of Grizzlies stole my heart, and although I'll always love the Braves the most, the way I feel about the Grizzlies is different, because they play right in my backyard. They are in my city. They are mine. Now, most every guy loves his share of sports, but I really, really love mine. As a single guy in his mid-twenties, I live and die with my teams more than most other people. I'm not trying to fill out an online dating profile here[1]; I simply want you to know where I'm coming from.

I love my teams, but I also love the sports themselves, and I study the game. I love watching players on the court without the ball, watching linebackers try to match wits with quarterbacks as they call out their plays, and knowing the strategies behind throwing pitches when you're ahead and behind in the count. So when I made my decently unpopular comments on "tanking" and said I wanted the Grizzlies to start playing for next season, it wasn't a pissed off season ticket holder overreacting, it was coming from someone who knew the delicate balance between contenders and pretenders and understood what the Grizzlies needed, personnel wise.

How Courtney Lee impacts the Grizzlies on the court.

And let me clarify what I meant and what I said. I never said I was in favor of the Grizzlies throwing games. I hate that idea, and I think it cheapens the game. I've already purchased my tickets for the rest of this season, so I definitely don't want them gutting the roster with D-Leaugers to play out the rest of the year. And I still root for wins! Now that Austin Daye is no longer on the team, I root for every shot a Grizzlies player takes to go in. I simply thought the road ahead was too steep for the Grizzlies to make the playoffs, or contend for the titlte.

We're still probably one or two games from Marc Gasol coming back, and then it's anyone's guess as to how long it takes him to get fully healthy and playing at that same level, and the Western Conference isn't getting any worse. The Grizzlies still have yet to win a game within their division, and are setting themselves up to have lost the tie-breaker to every other team in the playoffs from the West. They still have two starters who can't shoot, and no legitimate backup point guard. Every loss they suffer continues to add height to the already massive hill they'll have to climb to get themselves into the playoffs. I took every one of those things into consideration when I said I believed that the Grizzlies should start looking towards next season. And I was dead wrong. 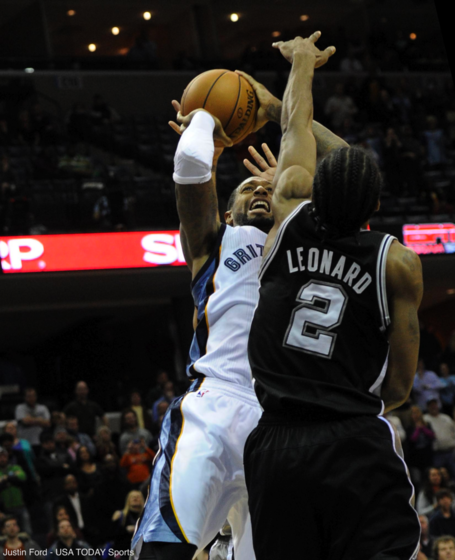 Last night, down two starters to the Spurs, who admittedly were also playing without Tiago Splitter, the Grizzlies gave an all-world effort in attempts to get a victory. Sure they lost, and there really is no such thing as a moral victory (Thanks, Ryan), but they fought. Hard. From the opening tip to the final buzzer, every man who stepped on the court gave 100% of his talent and effort to try to get that win. The couple thousand fans who weren't foolish enough to leave watched as this team walked off the court with its collective heads held high. It was exhilarating, and it was proof that this team isn't done yet.

In 2007, the Giants faced the Patriots in the final game of the regular season. Both teams had already made the playoffs, but the Patriots were on the verge of a perfect regular season. The underdog Giants played them as tough as nails, and if it weren't for a blown coverage on a pass to Randy Moss late in the game, they would have derailed the perfect season right then and there. But they didn't, they received a loss, but they were also granted the confidence that they could hang with any and everyone in the NFL.

This was a loss, no way around that, but this game sent a message to the players, the fans, and anyone who was watching: The Grizzlies aren't going away. Grit and Grind isn't dead yet, and though they may not reach the playoffs, they are going to scrap and claw and fight and battle until they are officially eliminated. And they probably won't stop then either.

More on the Spurs

More on the Spurs

It's weird to consider this game, a loss, my favorite game of the year. We didn't get a win, I didn't get to go to Aldo's and see my favorite waitress ever, and my sidekick wasn't able to attend it with me. But this game was, hands down, my favorite. It had little to do with the great company I was with or the fact that the tiny lady in the Grizzlies Grannies and Grandpa's sought me out to wave, smile, and say hello; no, this game was my favorite because this game had everything: A Grizzly player scoring 30 points, James Johnson blocking jump shots, Dave Joerger getting a Technical, Guyly Cyrus.[2] This game was Mike Conley and company looking me right in the eye and telling me "You're wrong."

And I am wrong. Even if we lose every game from here on out, you'll never here the words "tank" or "play for next season" come out of my mouth again. Mike Conley, Zach Randolph, Tayshaun Prince, and even Dave Joerger, I'm sorry. Jon Leuer, you reportedly read a lot of fan and blog articles, so tell the fellas I send my sincere apologies.[3] You guys convinced me. We may still be short-staffed, under talented, and without a true "superstar," but this is a team that isn't going to quit just because the road is long. You guys showed you're ready to answer the bell and take on all comers, and as you do so, I'll be cheering my lungs out in your corner.

All heart, grit and grind.

[2] It's that thing where a homeless Jason Earles dresses in drag and does parodies of Hannah Montana songs.

[3] Also, tell everyone to stop calling you Johnny Badger. You haven't played at Wisconsin in like 5 years. I'd like to believe you're a much bigger fan of Vanilla Thunder or the hundred other nicknames I gave you long before Vinnie Verno decided to trend this. But whatever...