Hypothetical: What if The Memphis Grizzlies sent Nick Calathes to the D-League?

Share All sharing options for: Hypothetical: What if The Memphis Grizzlies sent Nick Calathes to the D-League?

What If... the Grizzlies sent Nick Calathes to the D League?

Calathes has struggled this season, showing some good signs of development under Mike Conley, but other games he looks as if he used Mapquest circa 1998 to get out onto the court. The current lineup is already spread thin with Jamaal Franklin sent to Fort Wayne Red Ants and Tony Allen's continuing hand problems, but at this point Calathes inconsistency is not going to get him the development he needs.

Recent acquisition Courtney Lee looked REALLY comfortable in the loss against the Spurs. So his development time in the lineup is probably short lived (though a recent trade always has one of those really slump-y sophomore games), but I'm sure some experimenting is in order to maximize his volume in court chemistry.

But a bench unit of Johnson-Davis-Miller-Leuer-Lee/Allen (depending on TA's strength when his hand recovers) sounds like it could decimate a mortal teams second unit. Some people have suggested moving James Johnson to the struggling back up PG position, but I don't think he can handle that full time as his reps are still low in that department. He has good court vision and a willingness to make bold choices, but he also can get silly fouls and sillier turnovers. 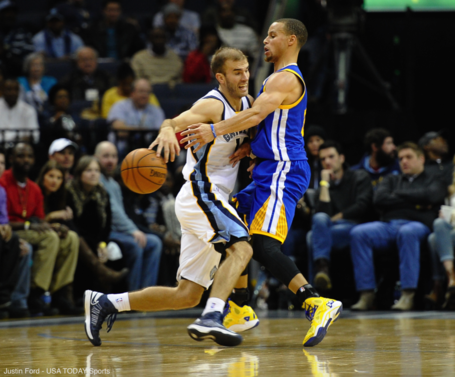 If there could be a hydra of Lee-Johnson-Miller switching off bringing the ball up court, dumping it to Ed Davis in the post, letting Johnson and Lee run pick and rolls and having Leuer and Miller pick their spots behind the arc, is that any worse than having Calathes dribble for 10 seconds unable to set up a play? The idea seems pretty Moneyball, I get it and I'm sure a bunch of people will tell me I'm an idiot. But it also could be the little brother of that bigs-heavy lineup we saw against the Knicks.

You could also sign a couple of 10-day contracts for someone out of the D League (though I doubt Seth Curry will sign again, sick burn front office) and have him just do the minimal point guard stuff, but the rest of the unit Grit n Grinds in the low post and on corners.

The positive for this is to get Calathes to gain some confidence. Or develop a move that would make him an actual threat to lure an additional defender or get someone to make a mistake. Because right now when he's on the floor it's 5 against 4. Fans are preaching patience, but also are tired of watching the team get run over when he's on the floor. Maybe he also just needs a couple days away from being overwhelmed.

The D League is not the same as it was 5-10 years ago. It's also not quite 100% legitimate farm system yet, but the competition is better there than it ever has been. It's where rookies are going to get their reps in, to get better looks and to take a step away from the huge lights of the NBA. Just get back to playing ball and figure out your moves. Case in point: James Johnson.