The Time Is Now: Why the Grizzlies are ready to win the NBA Championship

Hope springs eternal in the preseason. There are 29 other NBA cities coming up with reasons to be optimistic heading into the 2014-2015 season, and Memphis is no exception. The Grizzlies' good vibes have to do with more than just blind ambition, however. Their time is indeed now, and the NBA Championship is within their grasp. Here's how they will reach out and finally grab the brass ring.

Share All sharing options for: The Time Is Now: Why the Grizzlies are ready to win the NBA Championship

You hear this often whenever a new season begins, regardless of the sport. As training camps break and preseasons get to the "let's start the season already" stage, fans look across the landscape of their respective leagues and think of ways their team can win "the big one". You hear and read things like the following and can only shake your head...

We're a Josh Smith career year away from making a run in the East!

Lance Stephenson will really stabilize the Hornets this season...

Trevor Ariza has me completely forgetting about Chris Bosh and Chandler Parsons!

I think Boogie Cousins is really going to show some maturity and become a leader.

Foolishness, right? Not to those fan bases, who have endured weeks of "best shape of my life" and "gained 10 pounds of muscle" talk. Hopes are high, and if you stare long enough you can find reasons to be optimistic about nearly every franchise and their futures.

At least, you can in October.

But it won't last. The long-term rebuilds of Philadelphia and Orlando will drag out and wear down their fan bases. Detroit will deal with Josh Smith 3's, and Lance Stephenson and Trevor Ariza will likely not be what their fans hope they will be. DeMarcus Cousins' search for growth and maturation will probably not end well. The hope of October will, for many, fade into the future. "Why not us" will morph into "wait until next year".

Not here. Not in Memphis.

That gleam in the eyes of the Grizzly faithful is not in vain. Belief has morphed into expectation; the idea of a championship parade down Beale Street is not a pipe dream any longer. A challenge? Absolutely. Unlikely? Statistically, sure. Veteran teams that make the playoffs four years in a row with appearances in a Conference Semifinals and Finals during that stretch, though? They have reason to think that this year, this team, could indeed be "the one."

The expectations are there. David Thorpe recently said on "The Chris Vernon Show" that Memphis should expect a Conference Finals appearance from the Grizzlies. The stage is set for a run that the City of Memphis will never forget. It's optimistic, for sure, but not entirely unrealistic. And here's why:

No, four preseason games are not a great sample size. No, interviews and articles are not the same as playing through the grind of the NBA season. The talk of Marc Gasol being in the best shape of his life and wanting to be more aggressive in his game appears to be more than just talk so far, however. In two preseason games playing 15 minutes or more, Marc Gasol is shooting 50% from the field at 11-22 combined, with 7 and 13 rebounds in the two games. His latest preseason performance against the Atlanta Hawks (21 points, 13 rebounds, 3 blocks) strengthens the hopes of many; he is poised for a career season.

Small sample size, yes. But combine these clips with his performance in the FIBA World Cup and you get a more complete vision of what Gasol has potentially become. He is active defensively, engaged in the offense on multiple levels, and is moving much more smoothly than he has in the past. Gasol is indeed in the best shape of his life. He is a monster, the storied Wendigo looking for blood and the riches of a brand new contract. If trends continue and Marc Gasol does indeed make the leap to a legitimate MVP candidate, the Memphis Grizzlies will make him a "max contract" player in the offseason and will be in the hunt for a top 3 seed in the Western Conference this season.

You'll notice in the clip above that, as impressive as Marc Gasol looks, Mike Conley also jumps out as a player whose growth is continuing. The 27-year-old Conley has shown steady development in the wake of the Rudy Gay trade, embracing a role as leader and scorer more than ever before. This is Conley and Gasol's team now, and Mike is entering into the prime of his career at the perfect time. Championship teams tend to have multiple key players having career years. Where Gasol's potential MVP candidacy is a career high for Marc, an All-Star appearance and career highs in points and assists would catapult Conley into the upper-echelon-of-PG debates.

Year after year, Conley has proven all those who doubted him early in his Memphis tenure to be wrong. On the way to an NBA title, the Grizzlies' point guard must make the biggest jump in production of his career. Mike is capable of this; he has shown growth for multiple seasons in a row, and this year he will have more help than ever before.

When a rookie like Jordan Adams can stir up strong debate on social media over playing time on a potential championship contender, you know that a team is remarkably deep. A team that once had an ongoing issue with the backup point guard position now has two who can play in Nick Calathes and Beno Udrih. These two can create mismatches on the court for whichever opponent draws them as their assignment. Depending on the matchup, the Grizzlies' point guard position will consistently be a point of strength, which is most certainly a nice change of pace.

Grizzlies fans should expect a lot this season

Grinding Through the Off-Season: Clippers Edition

Grizzlies fans should expect a lot this season Grinding Through the Off-Season: Clippers Edition

Regardless of who starts on the wing for the Grizzlies this season, the list of players who are in a position to contribute is long and distinguished. This, of course, has not always been the case. Veteran playoff and championship experience will be coming from the likes of Tony Allen, Vince Carter, and yes, even Tayshaun Prince. Hungry players like Quincy Pondexter and Courtney Lee will fight to solidify roles and secure playing time.

And perhaps looking over all of their shoulders is the Grizzlies' first round draft pick who has impressed so far this preseason. If Jordan Adams continues to develop and play well this season, that depth ahead of him may well become trade chips with growing value. Considering that Tayshaun Prince is the only true "small forward" on the roster in terms of size, the right deal may present itself along the way for a taller player who can start and add size to the wing.

In the front court, Kosta Koufos is playing for a new contract with eyes on what should be a considerable pay raise. Jon Leuer is looking to show growth in his defensive game and consistency from range, and Jarnell Stokes could play the Jordan Adams role of rotational dark horse if the right opportunity presents itself.

Shooting, playmaking, length, leadership, and youth. All exist on this Grizzlies roster, and a team that was supposedly the deepest ever in Memphis last season is somehow deeper. Whether this depth is utilized on the court or perhaps on the trading block, it will improve Memphis either way.

The offseason commitment to Dave Joerger that Robert Pera and the front office made was huge for continuity and coaching effectiveness. There is no more question as to whose show it is; no longer will Joerger's system be eternally questioned so strongly. It is a marriage, a unification that could not come at a better time. Coaches must feel confident and comfortable to experiment with rosters and scheme, piecing together sets that put players in the best position to be successful. Given the slow start, Marc Gasol's injury, and the constant fight to get back into the playoff picture last season, it is unlikely Joerger ever felt comfortable in his own skin, much less with his own team.

A strong head coach can take such depth and utilize it to create mismatches night after night. A confident coach and his staff will continue the development of stars like Gasol and Conley, helping guide them to where they need to be in order for the Grizzlies to achieve championship status. This combination of front office/coaching cohesion and roster depth has not existed in Memphis before like it does now.

Players know all too well when the time to stop playing the young man's game is approaching.

For men like Zach Randolph, Tony Allen, Tayshaun Prince, and Vince Carter, those days are closer than further away. Grit and Grind, for all its triumph and tragedy, legend and lunacy, heart and heartache, is slowly but surely fading into the history books. There will be a time in the near future when Z-Bo and TA are numbers in the rafters, likely the first to be enshrined into Grizzly eternity. A time is coming when Tayshaun and Carter will be remembered for their respective time with the Pistons and Raptors more than their current stints in Memphis. So much is said of the passion, respect, and admiration the younger players in Memphis feel for these veterans. 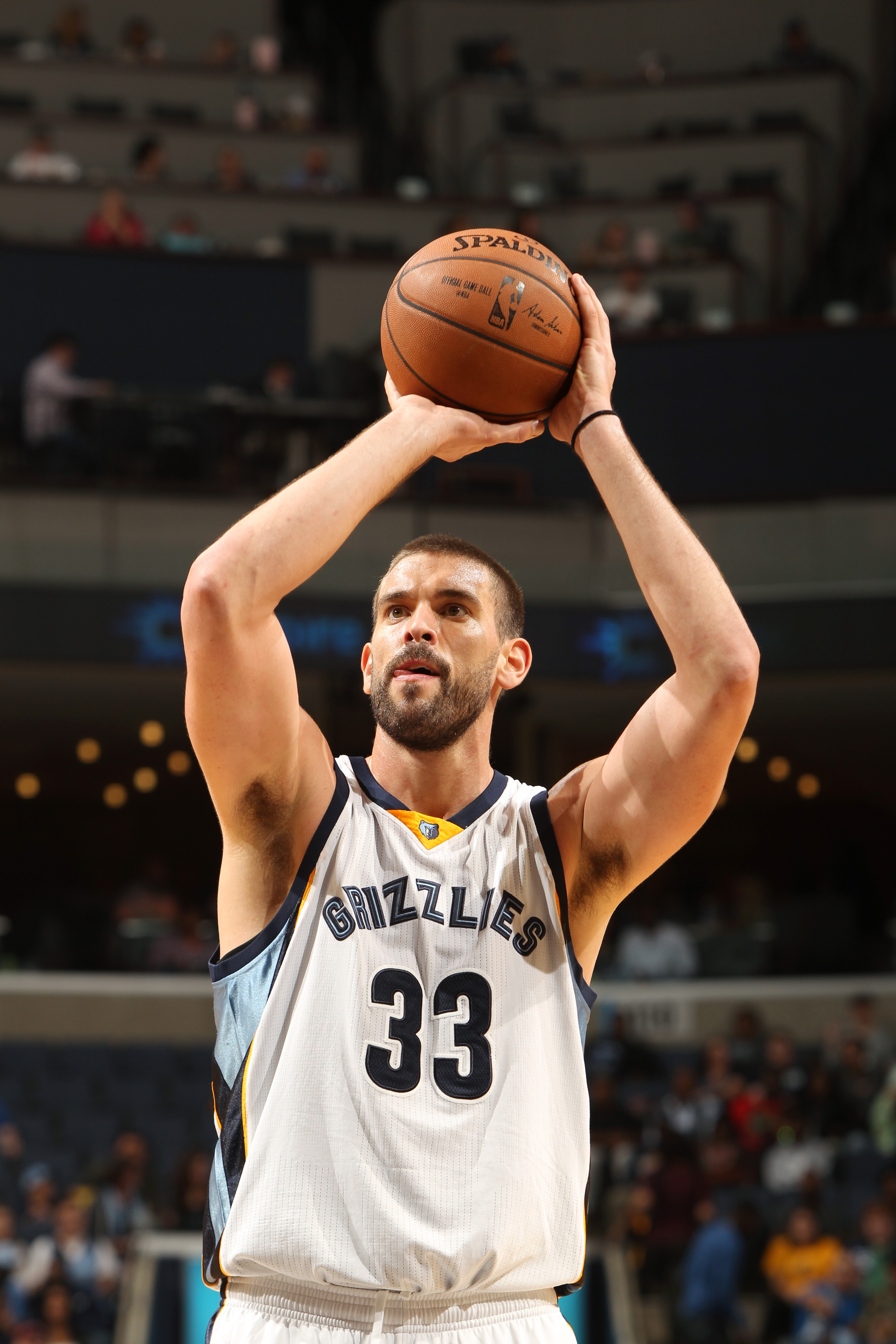 The time for talk is over. It is time to put that emotion into action.

It's time to take the experience that has been gained these past four seasons and turn it into a real run, unhindered by injury, and inspired by the moment. The Memphis Grizzles have a real opportunity to be that team that unseats the San Antonio Spurs in the Southwest Division as a lighter Marc Gasol and more aggressive Mike Conley negate the aging dynasty's efficiency. There is an honest chance for Memphis to get past the rival Oklahoma City Thunder and Los Angeles Clippers, utilizing their depth to either stay fresh through the season in preparation for the playoffs or for upgrading the starting small forward position. With a jump in effectiveness in the second season of the Dave Joerger regime and the impending free agency of Marc Gasol, the sense of urgency to win now for those whose time in Memphis is close to an end cannot just be a discussion point.

It must be the point of emphasis.

Quicker, smarter, stronger, more mature -- better. All teams hope for this to be a reality rather than some October dream. Of course, those dreams become realities and, in some cases, nightmares more often than not. That is not the case in Memphis. Evidence exists to show that the Grizzlies are primed to make a run. A potential MVP, a growing All-Star, an eclectic bench, and a coach backed by the entire organization say so. Now is the time. No more tomorrows and next years.

"Believe Memphis" has evolved to "Expect Greatness Memphis". The definition of success has evolved from just making the dance to getting to stay on the floor for a while. The players have evolved as well, changing their bodies and thought processes, roles and responses to the changing faces of authority throughout the "Grit and Grind" era. The pieces are for the most part in place, and the stage is set. The greatest chapter in the story of the Memphis Grizzlies is waiting to be told.

The other teams in the Association will certainly have something to say about it. Bring it on. It's time for a changing of the guard, time to make believers out of not just Memphians, but the entire NBA.

Memphis is ready. The time is now.