The Memphis Grizzlies finished Day Three with a heated scrimmage that needed extra time to be decided.

Share All sharing options for: Tony Allen takes his turn as Vocal Leader in Training Camp

Thursday's practice at UC San Diego ended with a scrimmage that left everybody wanting more...even the guys out on the floor.

The most vocal guy in this heated contest was undoubtedly Tony Allen. After one whistle, he went over to Dave Joerger to ask him who set a screen that blind-sided him moments earlier. Coach responded with "Z-Bo", which prompted a "Hey, let me hear it, Zach!" from the veteran swingman. Defensive accountability at its best.

It didn't stop there, though.

After some miscommunication on a high screen-n-roll, Allen and some other veterans reminded the guys "NO SWITCHING!" This chant echoed through the empty RIMAC Arena like some religious cult. Don't expect a lot of switching this year Grizz fans (not that that was ever a calling card of the Grindhouse, anyways).

Another thing worth noting on this day was that 'Team White' consisted of 4 starters (Marc, Zach, TA, and Mike) with rookie Jordan Adams manning a guard spot. This group stayed together for much of the game, only with Nick Calathes spelling Adams for stretches.

The opposing group, led by an aggressive Quincy Pondexter and a physical Jarnell Stokes, kept it close throughout. They ran a lot of 'Horns' sets, bringing both Marc and Zach away rom the basket.

Who was the hero of this classic overtime affair you ask? None other than........Jon Leuer. He drove from the left wing, across the lane, and delivered a sweeping righty shot that bounced in.

That left two seconds on the clock for the white team, the starting group, to do its magic.

However, there was no magic touch....as Marc Gasol's pass from the top of the key went straight out of bounds (see video clip down below).

As the team brought it in for a final huddle, the big Spaniard was seen throwing his practice jersey to the floor in disgust. Gotta love that fire, Grizz fans. 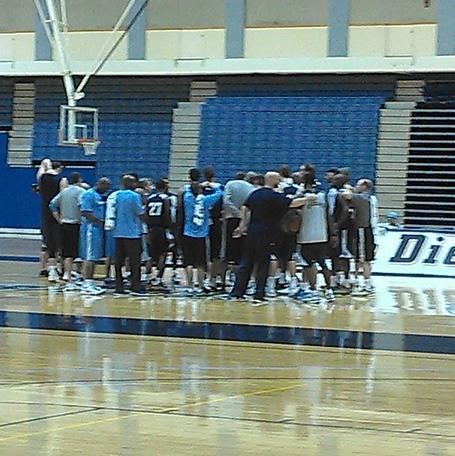 So, what were the take-aways from this scrimmage?

Tony Allen is definitely bringing more leadership than ever to this Grizzlies team. Also, we learned that Coach Joerger may tinker with a small guard in the backcourt this year alongside Mike Conley. Oh yeah, lastly, NO SWITCHING on screens.

Memphis has only one practice tomorrow and then it's straight to the airport - the preseason schedule beckons.