Cramming for the season: Last minute thoughts on Vince Carter, the rookies and more

Share All sharing options for: Cramming for the season: Last minute thoughts on Vince Carter, the rookies and more

It's been too long since I've seen some Marc Gasol passing magic or Zach Randolph trucking fools. When the regular season tips off tomorrow, I'm gonna be tweeting/texting/AOL instant messaging hella prayer hands emojis. I need NBA in my life.

But before we get to that action, I feel obligated to dump the last few thoughts I have regarding the Grizzlies. Housecleaning stuff, I guess – maybe not particularly interesting stuff, but stuff I want to get out there. Over the preseason, I've devoted a fair amount of time mulling over the Grizzlies' depth chart. Mike Conley, Gasol, and Randolph are entrenched within their roles, and as long as nobody gets injured (if Gasol gets injured again, maaaaan), they should be steady.

Everyone else? It's been a mildly interesting subplot for me, how the rotation might shake out. In the end, it's gone a slightly different way than what I would've liked – it looks like Tony Allen and Courtney Lee will start as the wings. I assume that'd leave Vince Carter as the sixth man with Quincy Pondexter and Jordan Adams filling out the wing corps.

The 8-game preseason has concluded for the Memphis Grizzlies. Let's sort out what's likely to continue and what was fool's gold (or fool's coal, as the case may be).

What do NBA experts miss when it comes to Memphis?

Grizzlies Pre-season Fantasy/Reality What do NBA experts miss when it comes to Memphis?

And that'll probably work out fine. Allen is a great defender, and the harm from his more impulsive decisions on defense will be better neutralized with Gasol at full health for hopefully the full season. Lee was an inconsistent three-point shooter throughout last season, but when he was going, the Grizzlies were playing their best basketball of the season. Playing to the continuity trend and hoping he can be more consistent this time around isn't a horrible bet.

But what I would've liked is for Carter to start. I can't put into words how much I've enjoyed Carter's transformation from show-stopping superstar to 37-year-old role player (although I tried). I may just prefer the prime-to-vet transformation over the superstardom stage, just because Carter's done it so perfectly. And I'm willing to bet that Rick Carlisle is responsible for a lot of it – in fact, there's the odd chance that leaving Carlisle might free Carter to start jacking the ill-advised pull-up shots that former All-Stars with the pedigree of (faded, but don't tell them that) talent like to do. Even in his Mavericks days, Carter would shoot a few jumpers every game that did indicate such an urge.

But would I bet on that happening? Hell nah. I have a hard time believing that Carter will immediately forget everything that Carlisle taught him in his twilight years, everything that will keep him in the league through age 40 (though then again, that third year of his contract isn't fully guaranteed).

A Carter-Allen pairing just sounds so perfect to me. I genuinely believe Carter is the best wing that the Grizzlies currently have, and I'd also love for Allen to start because of the value his defense adds when it isn't being negated by limited production on offense. In regard to that last point, Carter's three-point shooting ability and what he offers as a secondary ball-handler within the offense (although that's a bit flimsy at this stage of his career) should help plenty.

Some prefer Carter on the bench, and obviously among them is Dave Joerger (and also the dude Matt Hrdlicka). I'll respect the argument for preserving his body – I believe his minutes can still be suitably monitored as the starter, but it's definitely an easier task to accommodate that within the flow of lineup change when he's on the bench. The argument for him creating offense with the second unit as the sixth man though, I'm not digging. He's got some pick-and-roll ability still, but all too often, he settles for the long midrange shot. Obviously, a lot of his athletic burst is gone these days. He's best served as a two-way role player, one who shoots threes and puts in the effort on defense.

Lee is probably worse at creating offense than Carter, but it wouldn't be terrible to have him leading the second unit. It's easier to swallow his inconsistency (which, for the record, I absolutely believe will return this season) that way, and it's not like Lee is totally incapable of treading water as a cog within the second unit offense. I don't think there always needs to be "the guy" who comes in off the bench and commands offense in relief, and proper minute-managing can ensure that you've got solid two-way lineups constantly playing in any given game.

I picture the flow of the second unit offense involving a lot of passing and movement, without the need for anyone to make something happen on their own. Having the bail-out guy would help in a late shot-clock scenario, but he isn't necessary and I hardly believe that Carter, though he is the most suitable candidate, will add much value within that role in the end. Beno Udrih and, when he returns, Nick Calathes, should do fine as bench guards running the show.

My expectation is that Calathes resumes the primary back-up point guard role and I'd be a bit down if Beno "I Love PUJITs" Udrih retains that spot over him, but it wouldn't be the end of the world. Both should have at least a bit role if Joerger tosses out the super-small lineups every once in a while, which he should totally do. They looked great against the Thunder in the playoffs, and while not every team is as easy to go small against as the Thunder, I definitely think they'll help in selective situations. And they're plain fun.

I also wanted to touch on Jordan Adams and Jarnell Stokes, the two rookies, and their position battles. I don't often believe in 20-year-old rookies to help a team win right away, but I see both immediate and future promise in both rookies (Adams especially). There's something to be said for cultivating your prospects with real NBA minutes, too.

Adams and Stokes will be involved in position battles with Quincy Pondexter and Jon Leuer respectively. Obviously I love Pondexter even after last season's lost cause, and Leuer probably won everyone's hearts over in that stretch last season where he made like 198753 midrange shots consecutively while filling in during the Gasol injury. Honestly, I wouldn't hate it if they both hung around in the rotation over the rookies. Buuuuuuuuut...

I just don't know what to make of Pondexter these days (he seems like a corner three specialist that thinks he's a facilitating off-guard), and I think he falls behind Carter, Allen, and Lee on the depth chart. He's probably better than Adams, but given the size of the role we're talking about here, I'd give the spot to Adams for the potential to grow. It pains me, but if there's a bright side to this, it's that the Grizzlies can trade Pondexter and he'll break out on some other team where he can have a more stable role and I can watch him there. Basically, I'm imagining Khris Middleton on the Bucks, but one who owns a super cool dog named Buckets Pondexter and he's actually Quincy Pondexter.

As for Leuer, I just don't think he's actually that good. I'm easily fooled by a pick-and-pop big that makes all of his jumpers even if they come in midrange, but he's awful defensively and his impact as a three-point shooting big man just seems too limited to be of real help given how often he takes the midrange shots instead. I'll give Stokes the bit role instead, and hope he can make fun things happen while developing. Also gotta add: I'm a sucker for the "local kid comes home to join his favorite team growing up" narrative.

Regardless of which power forward takes that specific role, my hope is that Kosta Koufos has a stranglehold on the backup big man minutes. Health and age are going to be real concerns for Gasol and Randolph, but that aside, they're still dominant and they should play a lot. When one needs to take a break, Koufos should absolutely be called upon. He's an ultra-reliable big man who gets the team rebounds and paint defense, commodities worthy of much more than the 16.9 minutes per game he averaged last season. And then turn to super-small lineups and Stokes after that.

That's one of two things I'm adamant about. The other position battles – Lee starting over Carter, the decision between Calathes and Udrih, and with the rookies – could go one way or another and I wouldn't be upset either way. In all likelihood, one of the two rookies (probably Stokes) will end up on reserve and with the Iowa Energy. I won't be assed over any of it. The Grizzlies have a lot of satisfactory options, which is the nice thing about a team run by smart basketball people.

Less of this please. 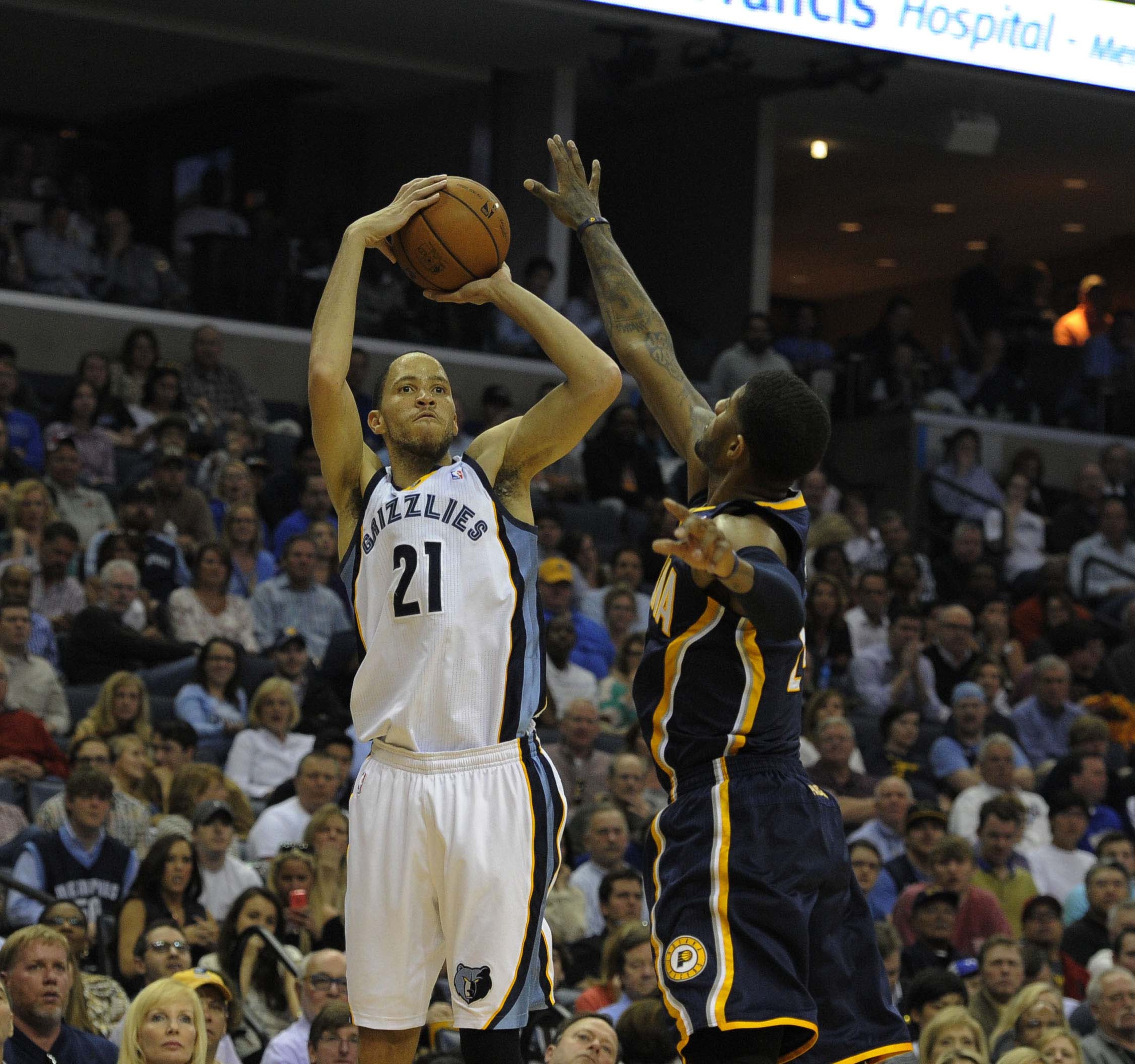 But the other thing I'm adamant about, and if I was adamant about Koufos being the third big in a three-big rotation then I'm super-ultra adamant about this, is that Tayshaun Prince is out of the rotation. In a perfect world, he's on reserve and not playing altogether. But that's probably not going to happen while he's being paid $7.7 million, and moreover, that's probably unjustified relative to the quality of his play. He's a fine defender and would probably hold his own offensively in a role as a utilityman/small-ball 4. In fact, playing him with a shooter like Carter or Lee wouldn't even hurt that much.

But this is personal (and totally irrational, which I've accepted). I can't bear to watch Prince play any more. The missed midrange shots are so painful, and I like everyone else so much more. There's zero upside with Prince, just sturdy below-averageness, and I can't imagine why anyone (reminder again: whoever is making the decisions is probably doing so with more clarity on the matter than I) would pick Prince over any of the guys I've listed above, which is the entire roster by my count. I imagine it wouldn't be the end of the world for Prince to play 10-15 minutes a game, but it would make my days if he didn't.

Anyway, that wraps up what is likely my last basketball writing before the season starts. It's 6am and this sort of ended up as a impromptu 1700-word rambling. I thought I was going to sleep at some vague point in the night some hours ago. ¯\_(ツ)_/¯ I don't normally include this sort of thing in my pieces, but thanks for sticking with me so far. I get the feeling it got messy along the way.