Why getting off to a fast start will nullify concerns.

Share All sharing options for: A fast start for the Memphis Grizzlies would mean fewer doubts and smaller problems

The Memphis Grizzlies are one of the biggest mysteries heading into the 2014-2015 NBA regular season. Coming off of an injury-riddled season in which the team won 50 games, it seems like the Grizzlies are as close to a lock to finish in the top eight of the Western Conference as one can get. However, a healthy New Orleans Pelicans team and a Phoenix Suns squad that brings one of the leagues best guard rotations to the table are breathing down the necks of last season's playoff teams, patiently waiting for their chance to get a shot at the Western Conference heavyweights come April.

There is not a consensus on which of last year's playoff teams, if any, will fall out and make way for the young and hungry Pelicans and Suns teams. Speculation among the many NBA experts, analysts, writers, and bloggers has begun. Some point towards the Houston Rockets as a potential candidate to miss the playoffs. With the loss of Chandler Parsons, Houston will rely on Trevor Ariza, who will hope to duplicate a stellar 2013-2014 season, albeit a contract season, to replace Parsons who made the 240 mile trip to Dallas to join the Mavericks.

Despite having two 'superstars' in James Harden and Dwight Howard, many pundits question not only the suspect supporting cast, but also whether Harden and Howard can remain focused on basketball long enough to secure Houston one of the eight playoff spots in a highly competitive Western Conference.

Grinding through the Season: Timberwolves Edition

Before the Grizzlies open their regular season with a team who became prominent in NBA headlines during the offseason, we get some unique insight from Tim Faklis of TrueHoop Network's A Wolf Among Wolves.

Much of what will determine Dallas' season depends upon whether or not Chandler Parsons, who goes from making roughly $600,000 to $14,700,000, can live up to his near max contract. Parsons goes from arguably the best contract in the league to possibly one of the worst contracts a player who now needs to produce like a top three option on a contending team.

Dallas will also hope to get production from older players like Dirk Nowitzki (36 years old), Tyson Chandler (32 years old), Richard Jefferson (34 years old), Jameer Nelson (32 years old), and Devin Harris (31 years old). Their bench leaves much to be desired, and their point guard situation is, well, unenviable; with that being said, however, never doubt the warlock Rick Carlisle.

There are two more teams that seem to be popular picks to miss the playoffs: the Portland Trailblazers and the Memphis Grizzlies. Portland has one of the best all-around starting fives in the entire league. Damien Lillard and LaMarcus Aldridge emerged last season as true NBA stars, but when it comes time to give those guys a break, Portland's bench is relatively unreliable.

The Trailblazers got off to an incredibly fast start last season with a 24-5 record, but they sputtered to the finish line while posting a 30-23 record through their final 53 games. Folks around the league question which Trailblazer team will show up this season: the 24-5 team or the 30-23 version.

The Memphis Grizzlies' 2013-2014 season was virtually the polar opposite of the Portland Trailblazers. The Grizzlies started their season with a 20-20 record through 40 games. The fan base was split, to put it lightly, on the decision not to retain head coach Lionel Hollins and promote assistant Dave Joerger to head coach. Being just .500 through their first 40 games did not do the Memphis Grizzlies brass any favors in justifying the head coaching swap. Luckily for Jeorger, the Grizzlies were able to finish the season with a 50-32 record, winning 30 of their final 42 games.

This season, the Memphis Grizzlies have uniformly placed an emphasis on getting off to a fast start. Players and coaches alike have all stated their desire to not have to play catchup the entire season like they were forced to for the majority of last season. Coach Joerger, by all accounts, has made a wise decision in electing to start Tony Allen and Courtney Lee on the wings alongside the core three of Mike Conley, Marc Gasol, and Zach Randolph.

Tayshaun Prince, based on preseason rotations and statements from Joerger, will see spot minutes, or in other words, some games he will play and others he will not. Quincy Pondexter has come alive in the final few preseason games, looking more and more like the Quincy most Grizzly fans hope he can return to being after missing more than 60 games last season. Preseason expectations for Pondexter may have been too high initially, but that is typically what happens when there is hype surrounding the return of a player at a position of need. Pondexter will have to ease his way back in as the regular season is set to begin, but he has certainly shown flashes this preseason of being the player everyone hopes and expects he can be.

Vince Carter has been a welcome addition to the team, and his ability to create shots and opportunities for others and himself has already benefited a team lacking in wing playmakers. Pondexter and Carter will push both Allen and Lee for meaningful minutes at the wing, making for an interesting minutes competition throughout the season, but Allen and Lee are the most familiar with the system and the best fits right now at the wing, especially for a team looking to get off to a quick start.

Looking at the Grizzlies schedule for the month of November (and two games in October), seven of their 17 games are against 2014 playoff teams (two of those seven games are against the Pacers minus Paul George and the Thunder minus Kevin Durant). It is imperative that the Grizzlies get off to a fast start during November due to the fact that, of their 13 games in December, 11 of them will be against 2014 playoff teams. 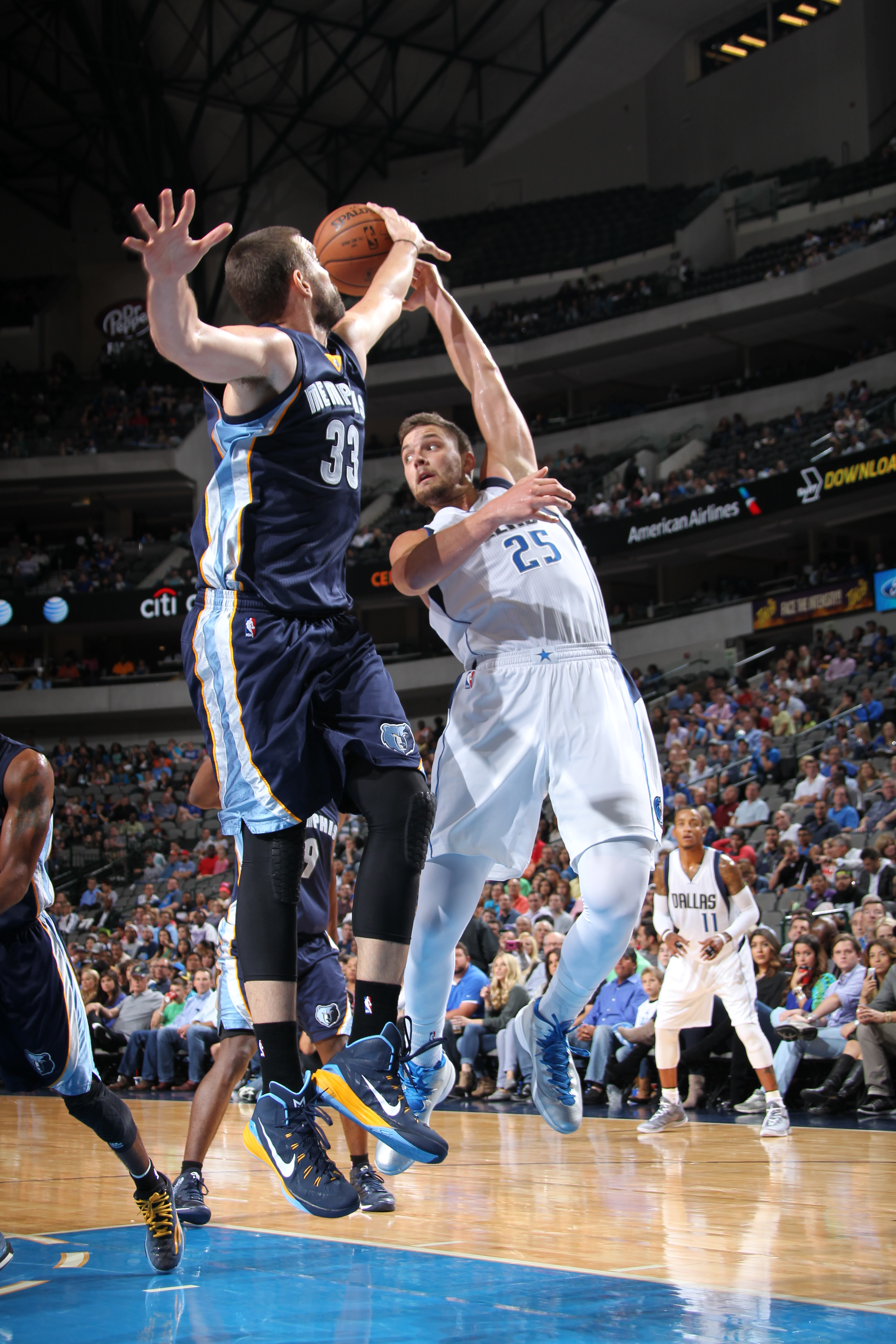 While getting off to a fast start is not completely indicative of a successful season, it certainly would help to culture one. Zach Randolph, Tony Allen, and Vince Carter are all older players, and they will require rest during the season in order to be at peak performance come playoff time. One of the reasons Tony Allen was so terrific during the 2014 playoffs while guarding Kevin Durant was that he missed several games in the latter half of the season, thus giving him an adequate amount of rest. Jumping out to a quick start will allow Joerger to sit his older players and make room for guys like Jordan Adams and Jarnell Stokes to get crucial early season minutes, making them more seasoned if they are called upon later in the season.

One variable that cannot be lost in all of this is the fact that the Grizzlies are essentially auditioning for the services of Marc Gasol beyond this season. If, for some reason, this season did not go as planned, and the Grizzlies found themselves on the outside of the playoff picture looking in, do not rule out the possibility of Gasol leaving Memphis for another team. While that is a highly unlikely scenario, it is not completely out of the realm of possibility.

Additionally, the Grizzlies seemed primed to make some sort of deal this season. How the team preforms early on could be a contributing factor in determining who stays and who goes. If Lee or Pondexter, or even both, struggles out of the gate, do not be surprised to hear one or both of their names being thrown around in trade rumors. The Memphis Grizzlies think very highly of rookie Jordan Adams, and if one thing is clear it's this: the Memphis Grizzlies appear to be of the belief that Jordan Adams is a future NBA starter, and they will not hinder his development in order to give minutes to two wings who seem to have cemented themselves as career role players.

Many variables, even more than I have named in this article, will decide what happens during the first couple of months of the regular season. Coach Joerger and the front office hope that these questions or issues such as wing rotation, who's on the roster come playoff time, and rest for older players will be resolved organically while the team enjoys early season success. Just remember, a speedy start will kill any doubts and solve many problems.