A few Grizzlies ex-patriots met up to watch their favorite NBA team. From a large black curtain, to a Drake look-alike, enjoy the sights and sounds of Grizzlies victory against the Hawks on Saturday night. 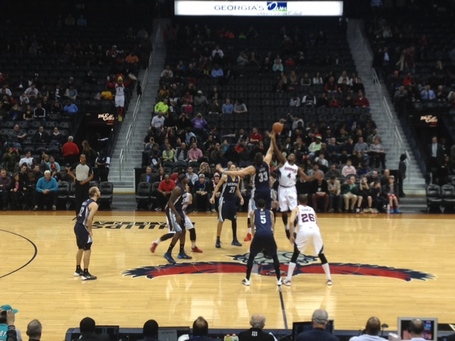 Going to a Saturday night game at Phillips Arena is like going to watch the Grizzlies play the Jazz on a Tuesday night. Because they couldn't sell enough tickets in the upper deck, an enormous black curtain covers about the upper half of the upper deck, giving the impression that darkness looms much lower than it should in a well-lit NBA arena. This would be fine if the games were sold out... but they aren't. Exactly why the city of Atlanta is a bad sports town is a discussion for another time, but decisions like hanging a giant black curtain over 25% of the arena probably doesn't help the situation.

Heading into the game, I spent more time than I'd like to admit deciding which Grizzlies shirt to wear. I settled on Chris Vernon's yellow "Starting 5" T-shirt from last year, mostly because I think it has the most good karma attached to it. Also, there's a non-zero chance the basketball gods will smile upon me for wearing Tayshaun's name after all the mean things I've said about him this year. Positive vibes people! 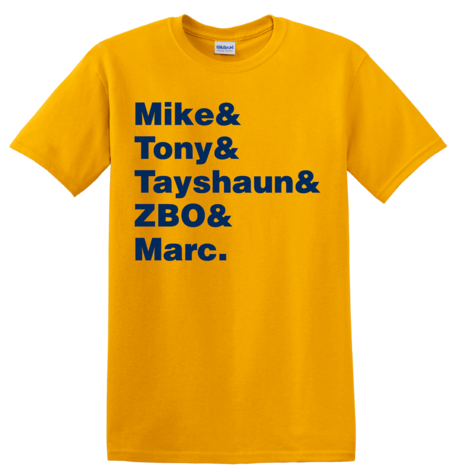 I didn't go to the game alone. Joining me were fellow Grizzlies ex-patriots:

@Sandy_Hrd - Strengths: Scathing Bachelor tweets. Volleyball back sets. Greatest thing to ever happen to me. Must Improve: Too loving and supportive. Often cares too much. Her jokes are funnier than mine. Somehow this turned into things I need to improve upon. Let's move on.

The Hawks starting lineup features Gustavo Ayon and former Grizzly Demarre Carroll. The Grizzlies counter with a lineup that includes Nick Calathes and Tayshaun Prince. It's safe to say neither of these teams are at full strength.

The Hawks jump out to a big early lead on the strength of Demarre Carroll hitting just about every shot in his repertoire. "Apparently Carroll only makes jumpers when I'm rooting against him," Ben says. "It's either that, or getting away from Lionel Hollins."

Paul Millsap is doing a lot of Paul Millsap things in the 1st quarter. Driving, dishing, canning jumpers. I don't want to commit heresy and say I'd take Paul Millsap's offensive game over either Lamarcus Aldridge and Kevin Love, but I don't think it's a stretch to say Millsap is, at worst, only a notch or two below those guys.

"You love Millsap," Ben says to me. "Are you secretly loving this first quarter?"

"I wish it was closer." I look up at the scoreboard as Darius Morris checks in for Nick Calathes. The Grizzlies are losing by 14. "And I don't really like this Darius Morris guy. I wish they'd give some of his minutes to Jamaal Franklin " I add.

Thankfully, the game gets closer. In a hurry. James Johnson comes in for Tayshaun Prince and, as usual, things happen. The Grizzlies turn the water off on the Hawks offense and by the end of the 1st quarter, the deficit is just two points. It's almost as if James Johnson is better at basketball than Tayshaun Prince. I'm wearing the shirt, so I can say that.

In between quarters, I point out Mike Conley on the sideline, looking absolutely dapper in suit and tie. "Wait," my wife says. She squints. "Is that Conley in the suit?"

"Conley can get it?"

As a Bulls fan, Ben watched Johnson before he was Double J, the Equalizer, Dr. JJ, Bloodsport, et al, and was just another disappointing 1st round pick who never lived up to his potential. We're talking about how hard it is to do what James Johnson is doing when we realize that Darius Morris - another 10 day signing - is playing well. Like, really well. Can lightning strike twice with the Grizzlies and 10 day contracts? "Darius Morris. I've always liked that guy!" I say enthusiastically, as Morris dishes to Courtney Lee for a bucket and possible three point play.

"Wait, who is Darius Morris?" My wife asks. "Is he the one that looks like Xavier Henry?"

"Are you talking about the guy at the Free Throw line?" I ask. "Because that's Courtney Lee."

"So Lee either looks like Xavier Henry, or the rapper Drake?"

Mark it down: on the Grizzlies lone free throw attempt of the night, I learned that Courtney Lee either looks like Xavier Henry or Drake.

Another guy giving the Grizzlies good minutes on Saturday night: Ed Davis. In my preview I noted that Davis' minutes had recently declined, and I thought that trend would continue on Saturday. Atlanta's coach Mike Budenholzer pounces on any weakness, and when Davis enters the game, the Hawks ran two straight plays at him. Davis acquits himself well. Though I have no evidence to support this, Davis seems to play better if his first few minutes go well. I dont know why that is true - or even if it is true - but it feels true. Meanwhile Ben is beaming like a proud father at a little league game.

Good for Ed Davis. He only scored 2 points, but grabbing 7 rebounds and blocking a shot in just 14 minutes is nothing to shake a stick at. Or maybe it is. Is it good if you shake a stick at something or not? One doesn't know these things.

The Grizzlies are down six at halftime, and as we exit towards the concession area, we notice there's a banner hanging from the rafters that reads "Widespread Panic." Apparently, the banner touts some type of concert sellout record. That's not okay, right? We need the Commissioner Silver to really lay down the law on what is and is not banner worthy. Retired jerseys, NBA Championships, Conference Championships: all banner-worthy. Regular season Division Championships: probably banner-worthy. Anything not basketball related.... probably not banner-worthy, right?

The Grizzlies play better in the 3rd quarter. I don't know exactly why, or how, because I'm transfixed by the guy sitting at center court rocking the Mike Bibby throwback jersey. I feel like I should know who he is: after all, he's sitting courtside (means he has money), and clearly isn't wearing his Grizzlies gear ironically (likely a real Grizzlies fan). If anyone can identify this guy, let me know. Kinda looks like Ice-T. Or Xavier Henry. Or maybe Drake. 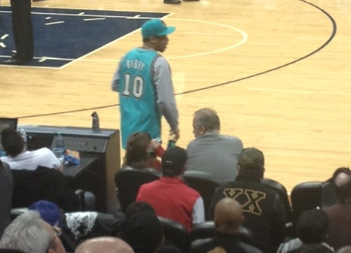 Even when Morris and Calathes play together in the backcourt, things don't go poorly. In fact, as the quarter ends with a Mike Miller three, I start to feel pretty good about this game. I'm standing up pumping my fist, doing the "Three fingers in the air" three point celebration, generally looking as white as possible, when I start to notice a smattering of growel towels. I look around. There's more than a smattering. There's a kid in a signed Mike Miller jersey. About 25% of the lower bowl is celebrating Miller's 3. Tony Allen is saluting a cluster of Grizz fans. It's sorta like being in the Grindhouse, except without the House Band, Barbecue nachos, or Grizz which is to say it's not really like being in the Grindhouse at all.

But after living with the influx of Kobe jerseys when the Lakers come to Memphis, then those same seats exchanging their Kobe jerseys for Lebron and Wade jerseys a few years later, it was nice to party in someone else's house.

Fast-forward to three minutes in the 4th quarter. The Grizzlies have opened up a ten point lead. Then the Hawks start doing what they always do. I mentioned this in our preview: the Hawks turn double digit losses into single digit losses, and 2 possession losses into narrow wins. They execute and squeeze every ounce of production they can from the last handful of possessions. It's the mark of a good coach. They get good shots. Millsap does a few more Millsap things, iincluding canning a three that cut the lead down to just three with just 39 seconds to go.

You don't realize just how fast everything happens until you watch the game up close. With about 20 seconds left, Gasol misses a baby jumper, the Hawks grab the rebound, and the last several seconds are a blur of bodies. Everyone is moving, switching, frantically creating and covering space. I can't look at it all at once. My eyes find Korver, who has popped open so often in this game, but he's covered. By whom I don't know. Just see a flash of color near him.

Then the thirteen seconds have passed. Lou Williams missed a three pointer I did not see him take. The ball already sailing to the rim by the time I located it. Falling harmlessly to the court as the buzzer sounds.

Griz win. Narrowly, but they win.