The Memphis Grizzlies are, thankfully, about to get a nice 6 day break from the grind of the NBA schedule. Heading into some much needed down time to recover and reload for the stretch run, how can Memphis pick up a win in their 52nd game of the season against a young and athletic Magic squad?

For the Magic Perspective, Check Out Orlando Pinstriped Post

Breaks are good for the spirit.

It doesn't mean that you don't love what you do. It is just nice to take a moment, catch your breath and recharge the ol' batteries. Whether it is from work, school or even a sport, breaks can do wonders for all.

If there were ever a team that needed the All-Star Break, it would be the Memphis Grizzlies. The grind of the NBA season has taken its toll; only one Memphis Grizzly has played in every game this season, and that would be Mike Miller (which is just stunning to me.) This team needs a chance to get rested, get healthy and get into that "zone" where games are won in bunches, because if they don't they will be watching the playoffs start in April at home.

There is no worse feeling than heading in to a break with a bad taste in your mouth. The Grizzlies will try to avoid doing just that tonight in Orlando as they take on the Magic. Despite the win against the Wizards last night, the Bears of Beale Street would be wise to finish this stretch with another victory as they try to catch the Phoenix Suns, Golden State Warriors and Dallas Mavericks, who are all within striking distance in regards to playoff positioning.

Don't let the Magic's record fool you; they are one game under .500 at home and are coming off a victory on the home court against one of the NBA's elite teams, the Indiana Pacers. If the Grizzlies are not ready to play, they will lose a tough one to a young and athletic roster.

Arron Afflalo is having a career year for the Orlando Magic. While he has cooled off some since his torrid start to the season in which he averaged almost 22 points per game, he is still a key cog to what makes their offense click.In Magic wins this season, Afflalo is shooting like this. 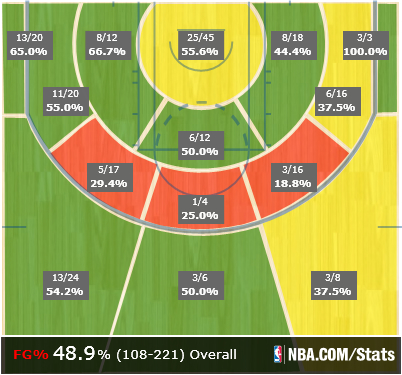 Kind of scary. Here is his shot chart in losses. 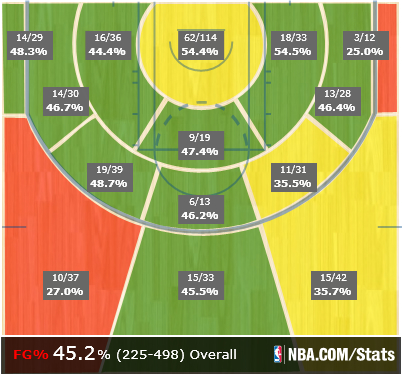 Not quite as scary, especially from three point land. Force him to beat you from inside the three point line, and when he is shooting contested threes consistently he is much less effective. While Afflalo will likely get points, an off shooting night will mean more shot attempts, which will mean less efficient offense, which will likely mean a Grizzlies win.

Use Your Bench Bigs

Yesterday a piece went up on the site that I wrote talking about ways to get Marc Gasol going on the offensive end (which you can read here.) Within that piece, I discussed getting the bench bigs a few more minutes per game. Marc has been playing 37 minutes per game in February, and while this may be an attempt at helping him get back in to shape, it has negatively affected the Grizzlies at various points.

The bench bigs of Memphis could take advantage of a good match-up on this evening. Jason Maxiell and Andrew Nicholson, while skilled in their own way, are not to the caliber of Kosta Koufos and Ed Davis when they are getting consistent minutes. Ed's athleticism and length along with Kosta's size and rebounding will be key to keeping or building upon a lead against the bench of the Magic.

Sometimes, you play a team who just isn't as good as you. Orlando is currently in that boat. They have their strengths, but they should not be able to compete with the Grizzlies when Memphis is focused and ready. This game should serve as a catapult into the break, a chance to build good vibes and head into a much needed long weekend feeling positive about the run and climb that Memphis will have to make to scratch into the playoff picture.

Play stifling defense, control the tempo, limit turnovers, feed your bigs and convert three point shots when given the opportunity. No need to reinvent the wheel on this night; play your game and "do you."

Memphis will attempt to get Zach Randolph going early against Glen "Big Baby" Davis, and when the defense collapses Courtney Lee will make them pay. On the defensive end, the Magic will have to volume score against the stout Grizzlies defense and while the improving Magic will keep it close, Memphis will pull away in the 4th quarter behind a feel good hot shooting effort from Marc Gasol.