Could Memphis Grizzlies PG Nick Calathes be a few skills away from domination?

Share All sharing options for: Could Memphis Grizzlies PG Nick Calathes be a few skills away from domination?

I realize the headline is a fairly bold statement, but let me clarify this butter. Some of the skills keeping Nick Calathes from making a full on metamorphosis from a furry caterpillar to a glorious, iridescent butterfly might be traits that Nick can't ever actually obtain.

Those traits include speed, strength and lateral explosion. And while it's definitely possible to improve in those areas, you have to think that at 24-years old there's a good chance Calathes has physically settled into the player he is.

However, I think Calathes can continue his mental adaptation to the NBA and include ways to balance his shortcomings. He need look no further than Big Spain for some inspiration on how to make the most of your physical skills. (BTW I think Calathes is probably more physically suited for basketball than Gasol.)

Marc wins a lot of his battles by outthinking the opposition, and I could see a similar development trajectory for Calathes if he's able to maintain the grasp on his confidence. When Nick is able to become a smoother operator within his own head I think we'll see his turnovers and the rate at which he fouls come down noticeably. He's got the knowledge - he just needs those synapses firing quickly enough to relay the knowledge to his muscles, muscles that are already in tune with a good portion of the NBA game.

While we may not see the Wendigo we have come to know and love again until November of this year, there are things Marc can do to still make an impact offensively.

What portions would those be? If you're not hardcore Griznatic you might not have noticed some of the subtle improvements Calathes has accomplished this season.

Nick can be sneaky good. Much of his game is sneaky, in fact. He's quietly racked up 14 steals this month while starting in place of Mike Conley. And after starting off the season looking like someone who had never thrown shot a regulation NBA basketball at a goal, Nicky C has found the concentration he needs to start landing some of his jump shots - quite a few, honestly, as he's shooting 43% from beyond the arc this month. It's been fun to watch his faith in that shot grow as he inconspicuously meanders up to the arc to flip up that funny looking shot that seems to hang in the air for minutes at a time.

But when talking about the skills he still needs to develop, let's take a gander at his shot chart: 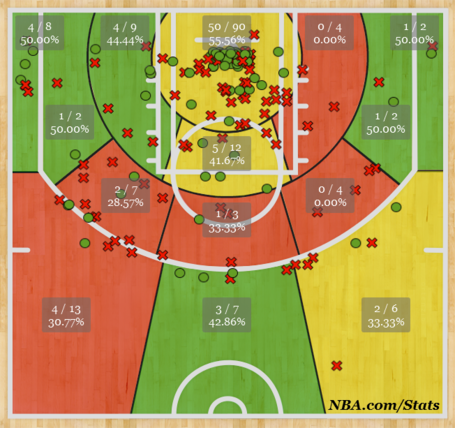 Aside from that spot just outside the left elbow that Nick loves so very much, a large percentage of his red X's seem to be placed right around the rim, more specifically, 3-7 feet outside the rim. Calathes would appear to do a very good job of finishing at the rim or off the glass (those beautiful cutters probably constitute most of those green dots) , but if you've watched him you know that he's still hanging on to the Euro-streak when it comes to finishing through contact (or perceived contact.) What I intuitively take from this shot chart is that Calathes often pulls up when it's looking like his layups will be contested, leading to floaters and tear drops that just aren't very accurately shot at this point in his career.

This actually gives Calathes two opportunities for improvement. He can either development moves (or mass) to help him finish closer to the rim when contested and/or hone his short-range floater to avoid the contact altogether (which would eventually pull defenders out sooner on his drives and open up an assist opportunity). These are both skills we've seen Mike Conley improve on immensely in the past couple of years, and hey, I think it's turned out pretty well for that guy.

But the great thing about Nick Calathes (wait hold on, great & thing & Nick Calathes all in the same sentence is still weird to me) is that he doesn't have to be Mike Conley. He need only be Swaggy C and the player that the Grizzlies FO saw in Europe when they put all their faith in him this past offseason.

I'll leave you with a statistical contemplation. Nick Calathes now rates at a 10.92 PER, even despite some really abysmal playing time earlier in the season. That 10.92 is now better than what Quincy Pondexter was rated when he got injured, better than what Tayshaun Prince has had all season, almost near the PER that Jerryd Bayless had when he left the Grizzlies and less than a point shy of what Mo Williams, the coveted backup PG the Grizzlies sought in the offseason, is playing at in Portland this season.

Not too bad for a guy who was getting booed on his way to the court just a few weeks ago.

The Grindmaster from last edition (vs Wizards) was split between Gasol and Calathes.