Memphis Grizzlies overcome another hurdle in their win over the Orlando Magic, Gasol to undergo MRI

Share All sharing options for: Memphis Grizzlies overcome another hurdle in their win over the Orlando Magic, Gasol to undergo MRI

In the last game before the All Star break, the Grizzlies were not given any favors. Off of a back to back and against, what have now become, Professional Spoilers in the Orlando Magic.

The shooting started off poorly, but Nick Calathes showed up with a couple of good steals and great assists. The Grizzlies kept their turnovers down and kept the Magic on their heels. At the end of the quarter, the Grizz had 9 assists and 11 made FG's. Their 12 points in the paint in that first quarter was twice as many in the entire 2nd half against the previous nights opponent, the Wizards. Even Tayshaun Prince showed up for a nifty looking give-and-go from inbounding the ball to Mike Miller.

In that first quarter, Zach Randolph hit his 14,000th point.

The second quarter was more of the same, good ball movement, holding the Magic's two big powered guards, Jameer Nelson and Arron Afflalo to limited explosiveness. Courtney Lee and Calathes did a good job defending the two. Calathes, a Florida native who also played college ball at University of Florida, was playing in front of his family tonight. He clearly wanted to make them proud contributing to holding the entire Magic team to 39% shooting to end the first half.

Even though the Grizzlies were taking advantage over the young front court and getting good points in the paint, we still saw Marc Gasol being very passive with this shooting. Until the third quarter, he finally started to get the shot that he wanted and began to really push for buckets down low.

And then the scary thing happened. In what looked like an attempt to set up a screen against Jameer Nelson, Gasol and Nelson's knees collided. Gasol instantly stopped and began clutching the knee and the play was blown dead. He had to be assisted off the court, I say assisted and not helped, because Gasol did leave under his own power. He did return to the bench, apparently requesting to be returned back into the game according to reports from the broadcast, but was left out. After the initial collision, Gasol did not appear to be in much pain, but an MRI is scheduled.

It seemed the Grizzlies started a little deflated after the Gasol injury, because they are humans and that's what happens. But Kosta Koufos and Prince stepped up defensively, keeping the dwindling lead close. The Magic put in their young and talented lineup of Tobias Harris, Victor Oladipo, E'Twaun Moore, Maurice Harkless and Kyle O'Quinn hoping to run the obviously exhausted Grizzlies out of the Amway center. But Zbo and Lee weathered the storm and continued to keep the Grizzlies in it.As has been the trend this year, the game came down to the last few possessions, but a Zbo dagger and a well-reviewed but probably wrong clear path foul, lead to a 4-point play that pushed the Grizzlies over the top. 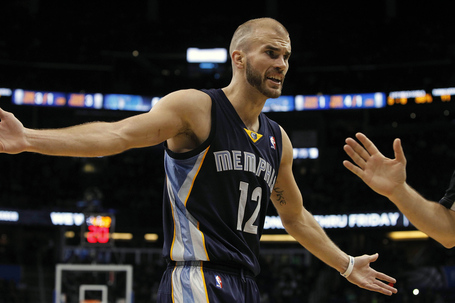 This win has lead the Grizz to the magic (sorry, sorry) number of 29 wins. Every year the Grizzlies win at least 29 wins before the All Star break they have made the playoffs, they have also never made the playoffs without winning 29 games by the break. But the real concern is to maintain a healthy team. With the next game not scheduled until tuesday the 18th, against the Knicks and no Grizzlies participating in All Star activities, it's a bittersweet victory.

Keep your fingers crossed for Marc!