A Memphis Grizzlies Future: 5 Bold Predictions for the Last 30 Games

Memphis returns from a needed All-Star Break Tuesday night at home against the New York Knicks. As the Grizzlies move into the stretch run, how will the last 30 games of the regular season unfold?

Share All sharing options for: A Memphis Grizzlies Future: 5 Bold Predictions for the Last 30 Games

As the 2013-2014 NBA season picks back up Tuesday night, there is plenty of uncertainty in the land of Grizzlies, Tigers and BBQ nachos. Between Marc Gasol's knee injury, Tony Allen's wrist and the trade deadline approaching the grind of the NBA schedule will resume with more of a sprint than a crawl. The Grizzlies play the Knicks, Clippers and Bobcats this week with an eye on the standings; currently on the outside looking in of the playoffs, Memphis is only 3 games away from the 6 seed. With good health and an easier, albeit road heavy, post-All-Star schedule a run is not out of the question.

The question is, how will the run unfold? Will it end with another playoff appearance? Will the Grizzlies make a move to upgrade the roster? How will the starting lineup look when totally healthy? Here are 5 completely educated to me predictions as to how these next 2 months will turn out for the Bears of Beale Street.

This hurts. I have long been a fan of Ed Davis and his potential. He statistically is one of the top defenders at the rim in the NBA, his length and athleticism make him an excellent rebounder with good minutes and he is an underrated passing big. With Marc Gasol's return his minutes have been declining; only 10 minutes per game in the month of February.

Ed is a restricted free agent heading into this off-season. Zach Randolph, who Ed Davis was believed to potentially replace in the Grizzlies starting lineup, is playing some great basketball and has said publicly he is willing to take less money to stay in Memphis long term. Add all of this to the surprising play of Jon Leuer and the potential of James Johnson playing some stretch 4, and Ed Davis becomes a trade chip who will likely not be on this roster next season.

Where will Ed Davis wind up? A team like Phoenix has cap room to spare and could swing one of their multiple first round picks for Ed. Or, as part of a larger deal, perhaps a three team deal in which the Washington Wizards gain a stud like Thaddeus Young, the Philadelphia 76ers get Tayshaun Prince, Ed and a future 1st round pick from Washington and the Grizzlies get Trevor Ariza, a SF upgrade on an expiring deal who is playing well and would be a great 3rd or 4th scoring option for the Grizzlies moving forward.

There are many options. Teams will be interested in Ed's services. If he is not in the Grizzlies' future plans, they should, and will, try to get something in return for him.

One of the most underrated moves of the season so far in the NBA was the trade of Courtney Lee to the Grizzlies in exchange for Jerryd Bayless. Lee has played inspired basketball, shooting 50% from the field as a member of the Memphis Grizzlies. Courtney Lee is also shooting 92% from the free throw line during his time in Memphis, and while his three point shooting has cooled since he first arrived in Memphis (he is shooting 34% from beyond the arc) his ability to score the basketball has made Memphis that much more dangerous on the offensive end.

With the return of the Grindfather likely not too far off, how the rotation and starting lineup will work will be interesting to watch. Assuming Davis is traded for a pick, if Tayshaun and Tony are both still on the roster one of them will have to sit. Tayshaun's game is not as built around energy and effort as Tony's is; he also likely needs to be on the floor with Mike Conley, Marc Gasol and Zach to be most effective. Therefore, Tay will likely remain a starter, putting Tony on the bench.

Tony Allen the sixth man will bring energy and intensity off the bench.

This isn't necessarily a bad thing. Imagine a Conley/TA/James Johnson/Leuer/Kosta Koufos lineup, or a Calathes/Lee/TA/Z-Bo/Gasol grouping. As long as there are two threats from outside the paint on the floor at a given time, Tony Allen can fit with just about any body. A back-court of TA and Calathes would be tough to score on, and when the game was on the line and you need a stop Tony Allen is in the game.

As a sixth man, Allen will still be able to get 25 minutes a night and have an impact on the game. It will just allow Tayshaun prince to make as much of an impact as he can at this point in his career, early in the game.

3. Mike Conley Will Average At Least 20 Points Per Game the Last 30 Games

Before his ankle injury, Mike Conley was beginning to show signs of real scoring punch. In fact, in 15 games before he was injured he was scoring 19.5 points per game. Here is Conley's shot chart during that span. 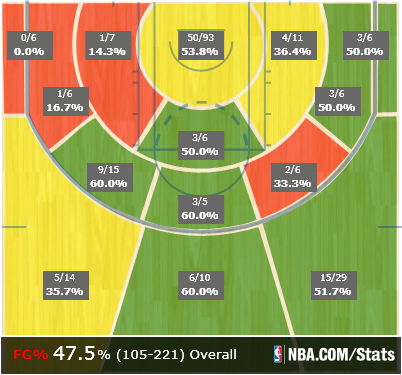 Almost 48% shooting, including a whopping 44% shooting from three point land. Conley was a possibility to come back from injury for the Wizards game last week, but was not ready to go and he and the team opted for an addition week of rest. One week later, Conley will likely be ready to get back to his career year. With the struggles and health issues of Marc Gasol, Mike Conley will continue to be depended on to score the rock. He will answer than call.

This is due to a combination of factors, including necessity. As the Grizzlies get healthy, they will continue to mesh. Memphis has done well post All-Star Game the past two seasons: 23-8 last season, 22-10 the season before that. In order to get into the playoffs, they will have to go on a run. March will be as good a month as any; of the Grizzlies 17 games in the month of March, 9 of them are against Eastern Conference teams. While 10 of those 17 March games are on the road, the Grizzlies have been road warriors this season with a record of 15-9 so far this season.

Coach Joerger has a veteran group of players who understand what is at stake and will be ready to crank it up with the playoffs in sight. A healthy roster who has been there before, an offense with more perimeter threats and depth will allow for the Grizzlies to get into a rhythm. Memphis will get 5 games or so to get their feet under them in February and can hit the ground running in March. 13-4 through those 17 games will allow the Grizzlies to start and end the month of March like a lion and will result in another Coach of the Month for Coach Joerger.

5. The Memphis Grizzlies will play the Los Angeles Clippers in the First Round for the Third Straight Postseason

The MulliCrystal Ball predicts a 20-10 finish for the Memphis Grizzlies. 49-33 will likely result in the sixth seed out West, with the Phoenix Suns and Golden State Warriors rounding out the bottom of the bracket (sorry Dallas Mavericks.) The Los Angeles Floppers Clippers, while playing a tough schedule the last 2 months of the season, have a returning Chris Paul and J.J. Redick to go along a much improved Blake Griffin. The Clippers will likely overtake Houston for the 3 seed, meaning Houston and Portland will meet in the first round in a 4-5 series. The Thunder will meet the Warriors in the 1-8 match-up, and the Spurs against the Suns as the 2 and 7 seeds.

This means...the rubber match. Two seasons ago, the Clippers took Game 7 on Memphis' home court. Last season, Memphis ended L.A.'s season at home in 6 games. It would only be fitting that these two teams would meet again in what truly is one of the NBA's better rivalries. Z-Bo vs. Blake, Conley vs. Paul, a series for the ages. Clippers vs. Grizzlies III.

Of course, all of this is prognostication, and feel free to hold these predictions against me if they are incorrect. However, when they come true...well, be sure to give credit where credit is due.

30 games left. The race for the playoffs is on. Time to grind.