Grind Prophecies: Not the same Blake Griffin the Grizzlies are used to seeing?

Share All sharing options for: Grind Prophecies: Not the same Blake Griffin the Grizzlies are used to seeing?

I usually like to use these Grind Prophecies posts to brag about a Grizzly who's been on a hot streak or a Grizzly who's been buried in a slump. I'll even use this space to talk about something random that I did or thought about during the day. Rarely will you see me go on about the Grizzlies opposition in the GP, but I can't help myself today.

Clipper's expert Steve Perrin of Clips Nation talks about LA's progression this season and what the Grizzlies should expect.

Read this knowing that I hate the Clippers and that Blake Griffin is definitely not one of my favorite or even moderately liked players in the NBA, but my goodness Griffin is having a fantastic season, especially recently in the month of February.

He's playing at a 24.6 PER while averaging 34 points a game this month, and that's with a low scoring game of 25. Griffin even put up 36 on Toronto in just 28 minutes of playing time. He's also dishing out 4 assists per game and averaging over 11 rebounds per game, something not too far off from his career averages.

What has become quite different from his career numbers is Blake's perimeter shooting. ?? I know. It's weird. But as fate would have it, Blake Griffin has turned out to be a decent outside shooter and now coupled that ability with his already explosive interior game. 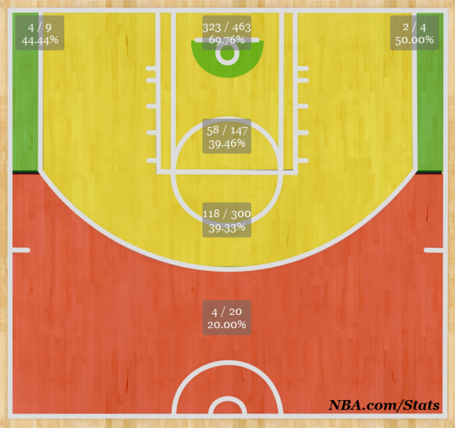 That's a lot more yellow and green than most Grizzlies fans would expect to see, and Dave Joerger has hopefully been devising ways to neutralize Griffin's impact on offense. We know that Zach Randolph will want to play him physically and aggressively, but the Grizzlies might need a few extra cards to play with perimeter shooting now apart of Blake Griffin's repertoire.

Grindmaster from last edition (vs Knicks) was split between Mike Miller and Mike Conley.