Memphis Grizzlies head coach Dave Joerger Approval Poll: How you feel about him these days?

Share All sharing options for: Memphis Grizzlies head coach Dave Joerger Approval Poll: How you feel about him these days?

The head coach of the Memphis Grizzlies has gone 7-4 since our last Approval Poll on January 29th, a poll that came the day after a throttling of the Portland Trailblazers on their home court.

This poll nearly punctuates a turbulent month of February that saw the Grizzlies go 5-3 without Mike Conley while merely treading water around the 8th playoff seeding. The perpetual injuries can always be used as an excuse, but Memphis lost disappointing games against Dallas, in Cleveland and at Charlotte. The two losses against weaker Eastern Conference teams is mildy concerning, but the real stinger is the loss to the Mavericks that dropped our standing a full game and now compounds with our loss to the Bobcats to place the Grizzlies (2) full games out of the playoffs at this point.

Before we look at statistics, I'll balance some of my disappointment with a pat on the back to the Joergermeister. He's got his hands quite full as far as splitting up playing time. We've got players that need rest, players that aren't 100% even with rest and has had little time to see how all those players interact with one another on the court. While the roster that the Grizzlies have been brewing is a delightful mix of talent and skill, it's also a potent potable with a volatile nature that can sometimes froth and boil over the edges. We're seeing James Johnson garner more time with Tayshaun Prince playing fewer minutes. We're seeing Courtney Lee stay in the starting lineup to provide perimeter shooting and overall scoring (although it still seems flat with Prince out there with them). We even see a fairly short leash on Nick Calathes - Joerger applies him liberally when he's jiving and pinches off his minutes when he's floundering.

Given all the circumstances, it's hard for me to pinpoint specific areas in which Joerger could be doing better, and I'm not convinced there are more than a couple of other coaches that could be doing more with the hand he's been dealt this season. I would like to see the utilization of some of our deeper roster players (Davis, Leuer, Koufos) but as Joerger said in a recent presser, the Grizzlies don't have time to tinker around with so much ground to make up in the remainder of the season.

(as compared to last month's poll)

The climb in defensive efficiency correlates to what I've been seeing on the court, and makes sense when you figure in the return of Gasol and just the Grizzlies overall attitude towards playing defense. I'm going to chalk up the dips in other categories to a combination of malaise and fatigue. The Grizzlies know their best basketball needs to come in the upcoming month of March.

Given the hardships Joerger's faced, and the improvements he's made in tie/shirt selections recently, I'm going to give him solid stamp of approval, but I'm taking his previous grade down just one notch. (The Charlotte game left a little sour taste in my mouth.)

And I know we give Joerger grief sometimes for his goofy smile and his previous resemblance to a character from Cool World, but at least he's not this crazy: 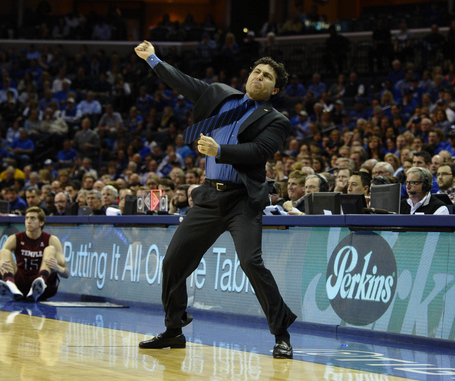