How Courtney Lee Has Unkinked the Grizzlies Offense

Courtney Lee has revitalized the Grizzlies and his own career since he replaced Jerryd Bayless on January 7.

Share All sharing options for: How Courtney Lee Has Unkinked the Grizzlies Offense

Courtney Lee was already a solid acquisition based on his numbers with the Boston Celtics, but I doubt even "the machine" could have foreseen C-Lee's impressive production in his first 13 games with Memphis. Especially with Tony Allen out indefinitely, Lee has been the shooting guard Memphis has always wanted, not quite the one they got with O.J. Mayo, Jerryd Bayless, Wayne Ellington, or Xavier Henry. He has jumped significantly in every statistical category relative to his career averages, and the Grizzlies are rolling (9-1 in their last 10 games) with him on board.

Since he got to Memphis, Lee has been the best spot up shooter in the league, period. He may not be a high-volume shooter as the fourth option on offense, but he doesn't have to be. When you're tuning a team for a playoff run, you look for fit and efficiency above all else, and Lee - 55% from the field and 44% from three - is as good as it gets.

More than half of Lee's shots come on spot-ups (catching and releasing the ball in less than 2 seconds), a tool you can use late in the shot clock and as a safety valve for double teams, without the need for ballhandling. It's also a shot that keeps the defense honest -- they must be within 2 seconds of him at all times -- and burns them when they're not. Courtney spends most of his time on the weak side of the play, behind the arc, often with Mike Conley on the strong side and Prince in the corner. From here, he can punish (and discourage) double teams on Zach Randolph in a way that Tony Allen can't. Here he is at work against Houston: 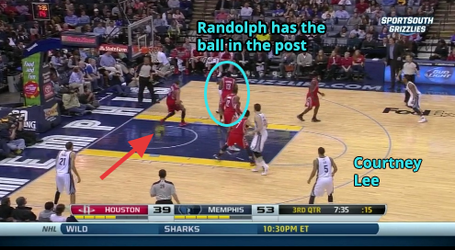 Randolph gets the ball in the post and Parsons (red arrow) comes to double. Lee isn't open yet, and Randolph can't see him, but Marc Gasol will change all that. 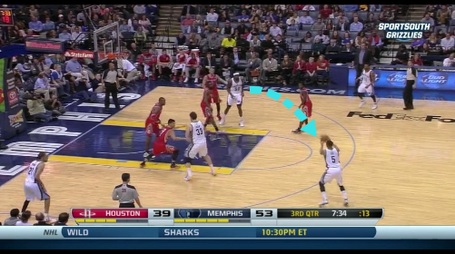 Marc (instinctively, or as a play designed to trap poor defending) moves out of the passing lane and screens Jeremy Lin. Randolph turns away from Parsons and delivers the pass. 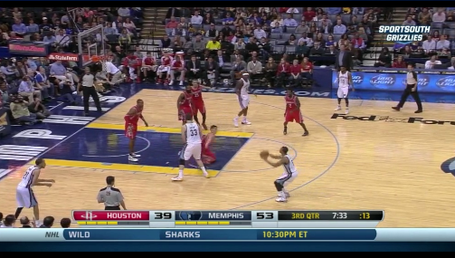 Lee takes (and makes) with Lin still hung up, but also has Prince ready in the corner in case Lin had recovered.

Lee is also one of the best pull-up shooters in the league at 54%, but takes considerably less time than Jerryd Bayless moving to open space. Mostly, he can reload against a closing defender and hit a shorter shot. His proficiency from midrange is a big factor in his shooting numbers - he shoots 60% from two and has a 66.5% True Shooting Percentage with Memphis, which is insane for a wing player. LeBron James and Kevin Durant are at 65.9% and 64.6%, respectively.

What makes Lee so valuable to Memphis though is not his individual performance, but how he works with the rest of the team. The Lee/Randolph/Conley threesome is one of the Grizzlies' best three-man groups, 12.7 points per 100 possessions better than their opponents. Compare that to Allen/Randolph/Conley, which is 1.2 points in the red. Lee isn't scoring all the points in these lineups - just his presence on the court, even with Prince, opens the door for Randolph, who has been scoring and rebounding slightly better per game since Lee arrived. Mike Conley has improved from deep too since January 1st, with an extra three-point threat beside him to force defenders to honor perimeter rotations.

While he may not be a Tony Allen caliber defender, Lee's not a black hole, either. His defensive rating is a mid-level 107 - compare to TA's 102 and James Johnson's 99 (!). Bayless, who has maybe a little more "junk yard dog" to his game than Lee, was a solid 104 but also fouled more. Lee is longer than JB, and so can cheat more and recover better, and his 6'5'' frame makes it possible for him to guard small forwards. Together with James Johnson, Conley, Tayshaun Prince, and Gasol, Lee rounds out a scary defensive lineup.

Marc is still the star of the Grizzlies' D, helping jettison Memphis back into the top tier of NBA defenses with a 94.4 rating in his 10 games back. But just having Wendigo in the lane makes everyone's job easier, with rim-seeking guards less willing to drive by perimeter defenders. Against Lee, opponents have shot 6-38 from three (16%). That's a small sample size to be sure, but it does include James Harden, Kyle Korver, and Kevin Martin. Let's not forget Courtney Lee guarded LeBron James in the 2009 Eastern Conference Finals - as a rookie. Call it defensive boot camp.

Until he cools off, I think so. That may be next week, or it may be never. Several people have suggested an Allen-Lee 2-3 lineup, which sounds like the best option (anything to stagger Tony and Tayshaun's floor time), but Lee has flourished as a pure SG with the Grizzlies whereas previously he played a mixture of SG/SF. I'd hate to break his rhythm by reassigning his role. Allen at the 3 is an equally interesting option, since he's proven (to Lionel Hollins and the rest of us) that he's capable of shutting down the game's best small forwards. If you're worried that bumping our veterans out of the lineup could disrupt the locker room dynamic, I'd say you haven't been watching Tony Allen on the bench in the last month. The Grindfather can lead from anywhere, especially with Courtney Lee giving him reasons to flex.