In the following weeks, the shooting form of every single Grizzly will be broken down and dissected. The subject of the first breakdown in the series? Mike Conley.

Every single aspect of the NBA is broken down and dissected every day by front offices, scouts, writers, and fans. However, one aspect that is not talked about very much is shooting form. The problem with discussing shooting form is everybody has been taught a little differently. What constitutes the difference between a bad shooter, a decent shooter, and a great shooter in basketball? The answer to that question might surprise you.

Growing up, many are taught to shoot completely wrong, and that's why even some NBA players have poor form to this day. Mike Conley is not one of those players. Conley possesses great shooting form, and the following paragraphs will lay out the techniques he utilizes to achieve his gorgeous shot.

How do the best shooters gather? They all do the following three things: 1) Dip 2) Turn feet and shoulders 3) Hop

First up is the dip. Dipping the ball during shooting means this: When receiving a pass at the chest, the ball is brought down anywhere from 6-12 inches around the waist before jumping to take the shot. Youth coaches everywhere teach their players not to dip when catching the ball, and that is misleading advice. All the best players do it, from Stephen Curry to Ray Allen, Kobe Bryant, Chris Paul, Danny Green, Chauncey Billups, Kevin Durant, etc. The dip allows players to gather themselves before rising for the shot, and it also makes the shot much more fluid and loose.

Add Mike Conley to the list of players that dip before the shot. Notice in this clip below what Conley does. He catches the ball at his chest and brings the ball down to his hip to gather himself and gain his rhythm before rising for the shot. He does this every time he shoots a jumper.

The next thing that's important to do before the shot is align your feet and shoulders properly. Many are taught to square both shoulders to the basket as well as their feet. That's incorrect. Again, the best NBA players do something different than what conventional wisdom has dictated for years.

What do the best shooters in the world all have in common? They all turn their feet to face either just to the left or right of the basket depending on which hand they shoot with. This aligns the shooting shoulder up with the basket. Since Conley is a lefty, he always angles his feet to the right of the rim, which squares his strong side hip and shooting shoulder to the rim. What this does is align the shot better while alleviating tension in the neck and shoulders, making a shooter much more loose. It also helps players that can't keep their shooting elbow in compensate for that. Check out below how Conley aligns his feet. He places them just to the right of the rim every time he is readying himself to shoot a jumper. 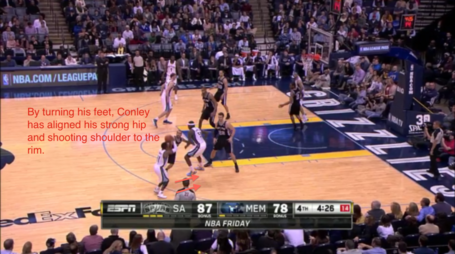 The last important part of the gather is the hop. What this entails is simple. Before rising for the shot, all the best shooters will use a simple hop. This hop allows a shooter to gain great balance and quickness on their shot. Conley's super quick release that allows him to get the ball over the outstretched arms of nearly any defender is in large part due to the hop. Also, when a player hops on catch and shoot opportunities, he is leaving himself with multiple options. First, he can obviously shoot the ball. Secondly and importantly, he can drive in either direction explosively because he has not chosen a pivot foot. Watch Conley hop just a little bit on both feet before rising for a shot in the video below.

Whether pulling up off the dribble or letting it fly on a catch and shoot, these same three principles should be applied to make a perfect shot. Mike Conley does all three, and the preparation he does before even rising for the shot is a big reason why he is such a good jump shooter.

Grade for Gather - A

During the rise, all the best shooters do nearly the same thing, whether they realize it or not. When they jump and raise the ball above their heads, they sway their legs forward and sometimes to the side with a slight bend at the waist, thus forcing their shoulders back into a relaxed position. What this does is allow a player to get good arc on his shot, which is obviously important.

Conley does not have as distinguished a sway as, say, Kevin Durant, but the key is Conley finishes in front of where he originated his jump, meaning he swayed his feet forward to relax his shoulders. This allows Conley to have a much smoother shot, which is the whole point. It keeps him from shooting stiff and muscling the ball up to the rim.

Watch this process unfold below. Before his jump, Conley's feet are both clearly behind the three-point line. 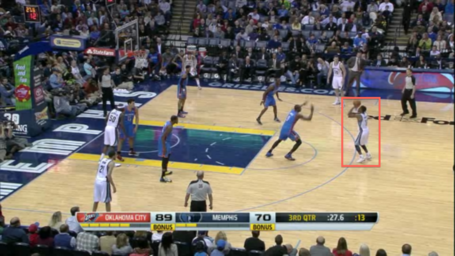 When Conley jumps, notice his legs in front of his upper body. He is swaying them forward, and his shoulders are forced back. 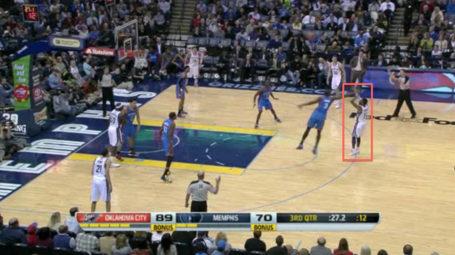 Upon landing, notice that Conley's feet are in front of the spot from which he jumped. These three images show perfectly how Conley sways, allowing him to shoot loose and put great arc on the ball. 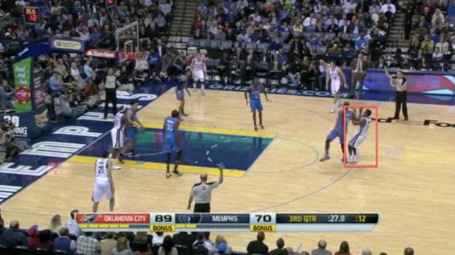 Grade for the Rise - A

Now that Conley has gone through the gather and the rise, half of his work is finished. However, that leaves the other half which is just as crucial to shooting success as the first two steps. When Conley gets to the top of his jump, he is now ready to release the ball. One of the most basic things a good shooter does is release the ball before his descent back to the floor. Because Conley goes up and down so quickly on his jump, it can be difficult to notice, but Conley releases the ball at the peak of his little jump every time.

Another step of the release is the positioning of the shooting elbow and hands. Shooters that let their elbow poke out do not have nearly the accuracy on their shot as someone like Conley that keeps his elbow in, which allows him to propel his shooting arm directly towards the rim upon release, keeping his shot straight.

As for hands, Conley positions his left (shooting) hand directly under the ball with his wrist bent back. The ball sits on his finger tips rather than his palm, which is important for backspin. The guide hand should be positioned on the side of the ball with every finger but the thumb positioned slightly under the ball to help balance it. The guide hand is only meant to support, and it should actually be removed from the ball before the shot so the ball is only being shot with the shooting hand. Conley usually does this, but there are instances where he keeps his guide hand on the ball all the way through the shot, which makes it appear like he's almost shooting with both hands.

To see what Conley is supposed to do every time, look at the image below. Notice how Conley's guide hand is already coming off the ball as he readies himself to release the ball. It's hard to get down on Conley much, as he uses his guide hand properly most of the time, but consistency is key to a good shot. This is one of the few areas of Conley's shot that lacks complete consistency. 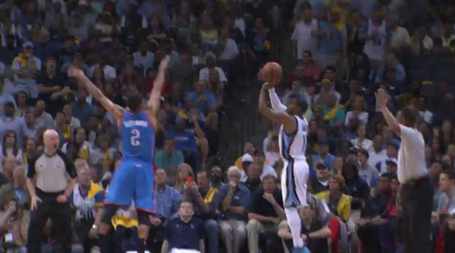 Another key to a perfect release is shooting with the correct finger. Many are taught to flick four fingers down and act like you're putting your hand in the cookie jar. However, the best shooters use their index finger to shoot. Michael Jordan and Kobe Bryant both employ this tactic. What shooting with the index finger means is this: It should be the last finger to touch the ball, thus being the finger directing the ball. The reason to shoot with the index finger is because it is the straightest and strongest of all the fingers, and it is the finger that is placed directly in the center of the basketball. Using this method of shooting always keeps the ball straight in line with the basket upon the release. Conley, like Jordan and Bryant, shoots this way. 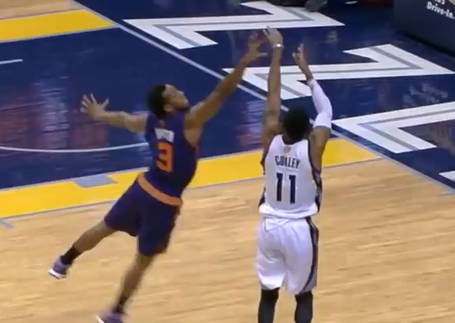 Last, but certainly not least, Conley sometimes rushes his release. When he does this, his shot is often flatter. Also, when he rushes, his eyes focus on the rim for less time, increasing the odds of a missed shot. This is the primary reason for Conley's lower grade on the release. As I said, consistency in every phase of the shot is key, and Conley unwittingly speeding up his motion sometimes could be the difference between him hitting 36.9% of his three-point shots this year and, say, 39%.

Overall, Conley is an exceptional shooter. Aside from a rushed shot every once in a while, his mechanics are near perfect. As previously stated, the most important part of a player's shot isn't mechanics. Yes, mechanics are important, but what is absolutely essential is that the player shoots the ball the same way every time. Couple Conley's almost flawless form with his great consistency, and what do you get? A dangerous shooting machine. One the Grizzlies deploy on opponents every night.