The Memphis Grizzlies, coming off a tough loss in Oklahoma City, find themselves playing as crucial a game as a team can play before the All-Star Break tonight. The Dallas Mavericks come to the Grindhouse, one game in front of Memphis for the coveted 8 seed in the Western Conference standings. The Grizzlies will need to "pop-up" from the fall against OKC for a fight against a team that if they win will secure an all-important season series and tiebreaker come playoff time over Memphis.

For the Dallas Perspective, check out Mavs Moneyball

In this life, we will all fall.

It is one of the few guarantees as we go through our journey on this Earth. We all stumble; sometimes it is a physical fall in which we hit the ground. Other times, it is a death in the family, a lost job, a failed relationship or financial struggles. The type of fall may differ, but they all result in the same, key decision.

Are you going to get up?

A good friend of mine has an awesome philosophy with his children to teach them the importance of getting up and not feeling sorry for yourself. Ever since they were young, whenever one of the kids (both little girls) would stumble and fall, he would tell them to "pop-up", get up quickly and not even think about the fall. No crying, no complaining, just get up. As the child began to "pop-up" consistently, he would give them a hug, say "now that wasn't so bad was it" and the little girls would smile and go about their happy life. I have taken to doing this with my nephews and my niece, and when I am a father one day I will use it as well.

To a less serious degree, the Memphis Grizzlies would be wise to "pop-up." They suffered a pretty tough fall Monday against Oklahoma City. It was a game they weren't supposed to win, but the lack of scoring and poor shooting was tough to watch at times.

However, it is best to "pop-up" and not think about what had happened to lead to the fall. The Dallas Mavericks, the team directly in front of them currently for the 8th playoff spot in the Western Conference, is in town. They boast a future Hall of Famer in Dirk Nowitzki and an offense that ranks 4th in the NBA in efficiency. Defense will be key to slowing down the Mavericks, but Memphis will have to score more than 77 points to win this basketball game. They have to move on from the fall, pick themselves up and forget it.

Make Them Earn It From Three 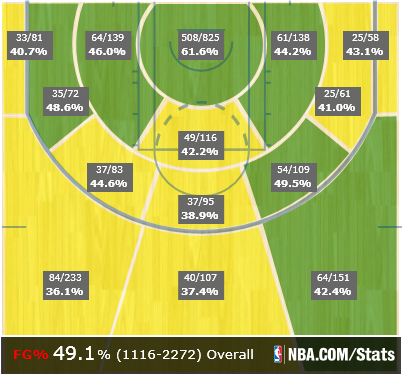 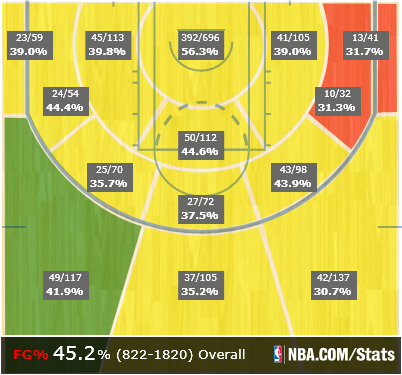 In the Mavericks' losses, their shooting percentages are most drastically different within the paint area and on the right side of the court from long range. The Grizzlies need to make sure that they are limiting easy transition baskets and forcing Dallas to take contested jumpers, not allowing them to launch from three point land at will.

The Mavericks have 4 players shooting 35% or better from three who play consistently: Jose Calderon (44%), Dirk Nowitzki (40%), Shawn Marion (36%) and Vince Carter (35%). Make Dallas play through less threatening offensive players like Jae Crowder and Samuel Dalembert, while forcing their long range snipers to beat you on the dribble drive.

Speaking of the dribble drive, once players like Calderon and Monta Ellis come off of picks and attack the lane, the Grizzlies need to defend without fouling. Dallas is the 3rd best free throw shooting team in the NBA, shooting 80% from the line for the season. For comparison's sake, the Grizzlies are 21st in the NBA at a little under 75%.

In Mavericks wins, they shoot almost 3 more FT attempts than in losses. Those shots from the stripe can make all the difference, especially down the stretch of halves. Whether it is a penetrating wing or Dirk Nowitzki on the perimeter (who is shooting over 90% from the free throw line), Memphis needs to move their feet, go straight up with their bodies and not swipe at the ball unless they are in good position with good timing. Not fouling three point shooters would also be a welcome change.

Facilitate the Offense By Committee

Too often you can tell when the Memphis offense is going to struggle. There is too little movement and too much isolation, whether it be for Zach Randolph, Marc Gasol or heaven forbid Tayshaun Prince. When the Grizzlies win, they are averaging 23 assists per game, and when they lose they are averaging 19.5 assists per game. Those 3 less assists could be on slashing wings who miss lay-ups, or a lost three point opportunity after not making the extra pass. At the least, it means 6 less points for an offense that needs all the scoring it can get at times.

The Grizzlies will have to defend without fouling and facilitate for one another offensively in order to win.

With Mike Conley out, the task becomes greater. Players such as Tayshaun Prince, Courtney Lee and Mike Miller will be dended on to bring the ball up the court at times in relief of Nick Calathes, who has played well filling Conley's spot so far. Darius Morris, the Grizzlies' recent 10-day contract signing, will also be counted on heading into the All-Star break to help facilitate the offense and get the ball to the player with the best shot. Marc and Zach need to continue to feel and look for double teams so that they can pass to open slashers or players on the perimeter.

It will take a village to try to "replace" Mike Conley. If they Grizzlies hope to get through these Conley-less days, they will need to do it together.

Memphis' defense will stifle the Mavericks in the lane, but Dallas will still score from the perimeter at times. The Grizzlies will ride big nights from Courtney Lee and the bigs and will "pop-up" from the OKC loss with a big win in the Forum.