Z-Bo's Song: The Art of the Double-Double

Zach Randolph is in the middle of another productive campaign for the Memphis Grizzlies, grabbing rebounds and scoring at an impressive rate. So how does Z-Bo, without the long range capabilities and height of players like Kevin Love and LaMarcus Aldridge, dominate the paint and the glass to the tune of 30 double-doubles so far this season? It is a matter of positioning and foot work.

Share All sharing options for: Z-Bo's Song: The Art of the Double-Double

I guess it is hard to see you when you're in the mud.

Here in the land of Elvis, the blues and BBQ, the Memphis Grizzlies fly under the radar. Our coaches get Googled when they win Western Conference Coach of the Month, the Grizzlies are often overlooked when it comes to nationally televised games and our players' accomplishments can go unnoticed at times.

On those rare occasions when the Grizzlies do get national recognition, it often has to do with Zach Randolph, the Grizzlies' resident "Beast on the Block." The only two-time All-Star in the team's history, Z-Bo, as he is lovingly called in the Bluff City and beyond, is a baller. If you don't believe that to be true, watch this now famous clip of Stephen A. Smith of ESPN's First Take "rapping" about Zach and his ability to abuse the likes of Blake Griffin during last season's playoffs.

Even now, it is a beautiful thing to watch. Zach has had his share of critics (this writer included) over the past few seasons, usually in regards to finances and his large contract, which he can opt in to one more season of at $16.5 million. Any criticism of Randolph has little to do with him as a player, and nothing to do with him as a member of the Memphis community. Zach has helped to pay heating and electric bills, taken kids with needs in Memphis school shopping and embraced the city as his home. As he put it, this is a blue collar town, and he is a blue collar player. Memphis loves him for that.

Another place he embraces as his home is the paint, whether it is in the FedEx Forum or any other NBA arena. Zach Randolph this season is averaging 17.4 points per game, right around his career average, and 10.7 rebounds per game, which is 1.3 more than he has averaged over the course of his career. He is 3rd in the Association among Power Forwards in double-doubles, trailing only All-Star starter Kevin Love and All-Star reserve LaMarcus Aldridge in that category.

Z-Bo is like an artist when it comes to creating double-doubles.

He does all of this while playing below the rim, not having elite athleticism or height at 6'9" tall. What he does have is girth, footwork, an extraordinary ability to position himself and the mentality that the paint is his and whoever wants to take it from him will have to fight, sometimes literally, to do so. All of these factors contribute to Z-Bo being one of the great artists behind the Double-Double of his generation.

Zach's finishing ability in the paint is something that is not as consistent as he would probably like it to be. He can score the ball from other areas, but where he does a majority of his work in in the lane. Here is a look at his shot chart this season. 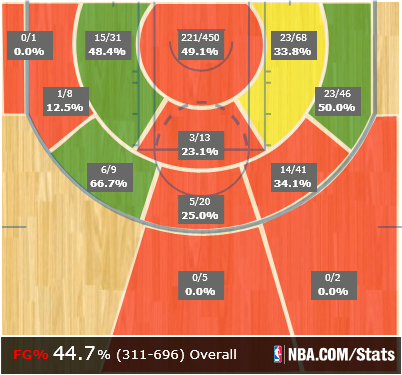 He has good touch from right outside the lane on either side, but in the paint he shoots 49%, which is 7% lower than the league average. What Zach lacks in consistent shooting in the paint, he makes up for in positioning, effort and getting himself under the rim to gather his own missed shot. Take this series of screen shots from the Grizzlies' recent win over the Bucks as an example. 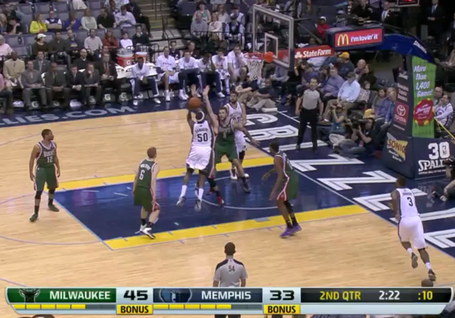 Randolph goes up in the paint with a shot against Ersan Ilyasova, who is taller and longer than Zach. Ilyasova effectively defends Randolph and he misses the shot. 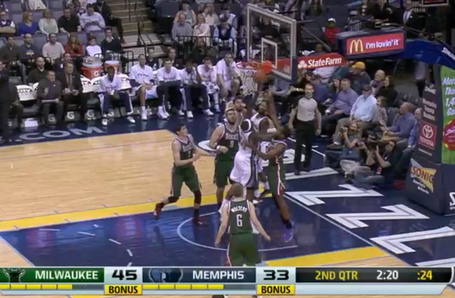 After bouncing around on the rim, the shot finally falls and Zach is the first to get off the floor for the rebound. His timing is uncanny; he isn't going to out-jump anyone, but he has trained himself to be able to be the first one getting up for the rebound. This ability to time his jump and be the first to get to the basketball negates others athletic advantage over him, and Zach is in position to get the offensive board off of his own missed shot, lovingly referred to in Memphis as a Z-Bound. 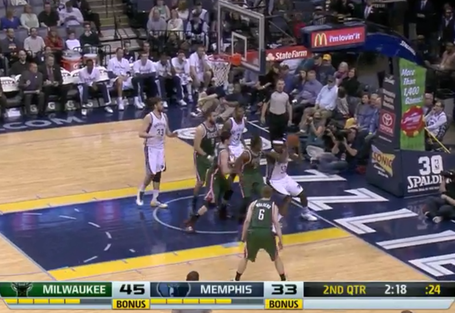 Zach has secured the rebound and is now in a precarious situation. His back is to the basket and he is well under the backboard, almost out of bounds with his left foot. He also has two Bucks defenders withing 3 feet of him. 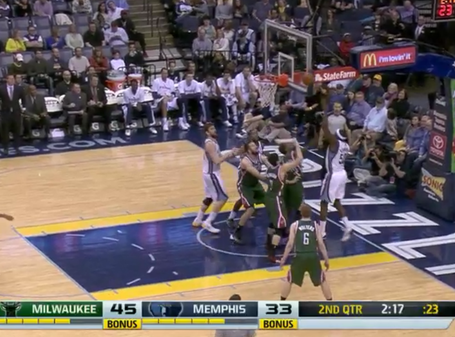 Z-Bo decided to open up to his right, the only way he could in that position, and use his 260 pound frame to create space between him and the defender. That little bit of daylight is all he needs and he goes up and finishes with a little hook shot. 2 points, and a rebound, in one possession.

"The Beast on the Block" doesn't just do a great job getting in to position for his own missed shots, he also has the uncanny ability to predict where his own teammates' misses may go and set himself up in a spot to collect the board for an easy 2 for him. Here is an example of just that during last season's Western Conference Finals against the San Antonio Spurs.

Zach, anticipating that Tayshaun Prince would be strong on his driving shot attempt, uses his physicality to move Boris Diaw out of the way early and get under the basket. The ball bounces straight to him, and he lays it in. Part of this is experience, but there is an aspect to Zach's rebounding game that cannot be taught, the ability to anticipate and attack the ball in the air.

Zach's rebounding ability translates from offensive rebounding to defensive. He is able to out-position, out-tough and out-time his opposition while attempting to get rebounds. He also uses not just brute strength and size, but smarts to out-position his opponent. Here is a great example of this from the most recent Oklahoma City game. 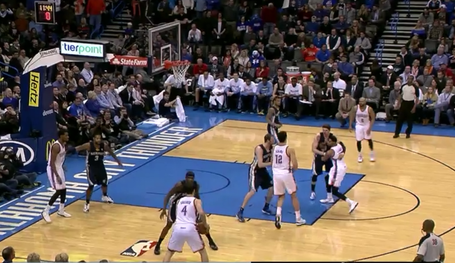 Zach starts out outside the paint to honor Nick Collison's ability to shoot. Jeremy Lamb is about to come off of a Steven Adams screen and receive a pass from Collison. 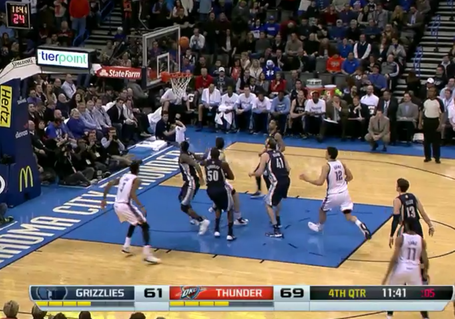 Lamb takes a jumper and misses. Collison beats Zach to the rim and actually got position on him, but he commits to being too deep under the basket too soon. He is right where Zach wants him. 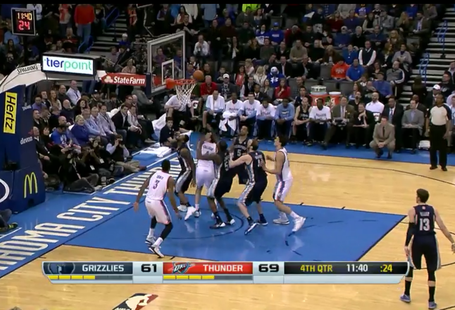 Collison, because he was so far under the basket, misjudges the bounce of the ball and is unable to finish at the rim. Zach is now in a prime position to secure another rebound on his way to his 30th double double of the season.

Of course, rebounding is not the only aspect of achieving the double-double. You must be able to score the basketball. Zach Randolph, more than anything else as a basketball player, is a scorer. He can hurt you in a variety of ways, whether it be from mid-range or in the post. The example from the Bucks game shows his ability to turn and attack the rim from around the paint. This next series of screen shots will show different ways Z-Bo attacks the post. 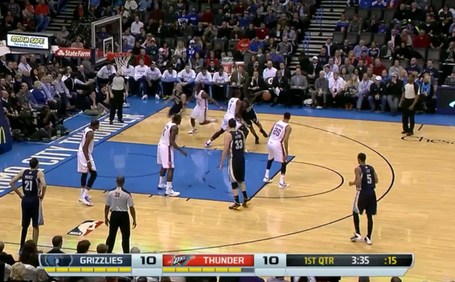 Zach gets the ball in the high post, with perennial All-NBA defensive teamer Serge Ibaka defending him. He uses his low center of gravity and size to back Ibaka to the basket. 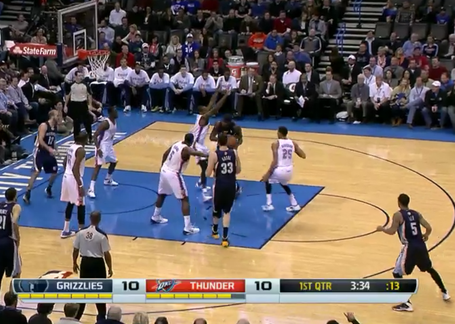 Zach uses a similar move to what he used in the Bucks game, stepping to his right and using his body and arm to create space. Much like his miss against Ersan Ilyasova, however, Ibaka has good foot work and is using his length to affect Zach's lane to the basket. 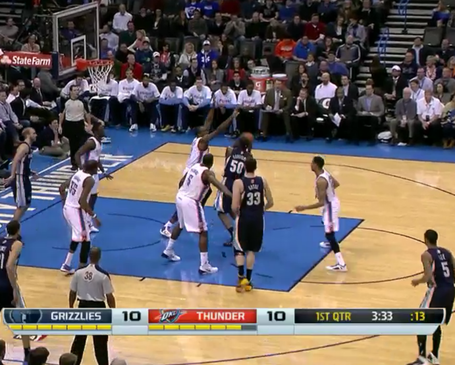 Zach pump fakes through Ibaka and uses his arms/elbows to swipe through, creating more space for him to operate. Zach has great footwork in the post; as he comes through with his arms, he is taking short quick steps forward and under to gain ground in the paint. This combination of foot speed and veteran savvy will allow Randolph to be able to get a shot off against a longer and more athletic defender. 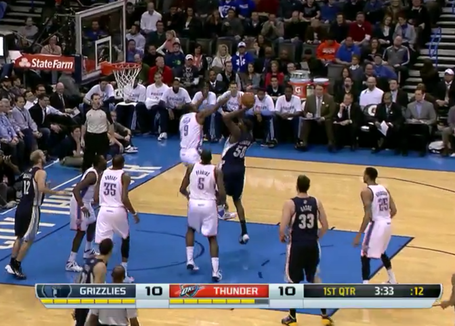 Ibaka stands his ground and rises up to defend the shot. Z-Bo leans back just enough to be able to get the shot off over Ibaka and score.

Randolph also can use that threat of his quick feet to create space for a mid-range jumper. 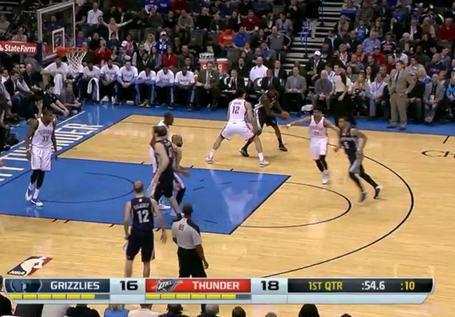 Zach squares up to the basket with Thunder rookie big Steven Adams guarding him. Adams, while inexperienced, is bigger and longer than Zach. Z-Bo keeps a wide base here to start and will step through using his left, or non-pivot, foot so that he can give himself more space/options to score the ball. Notice where Adams' feet are to start, outside of the paint. 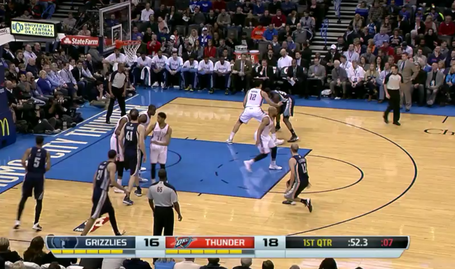 Once Zach completes his step through, Adams is further back, with his left foot partially in the paint. More space if created. The fact that Z-Bo has the ball low, as if to threaten to dribble, also forces Adams to retreat a bit, honoring Zach's quick feet and ability to get the corner on him on the way to the rim. 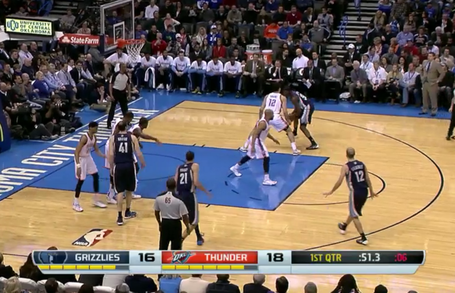 The patented Z-Bo jab step. Players honor it because Zach is still in that triple threat position of being able to shoot, pass or drive to the rim. Adams has backed up even more now, as both his feet are in contact with at least a portion of the lane. 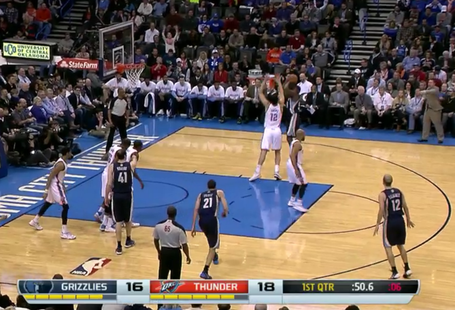 A jumper from mid-range, made possible by proper footwork on the step through and jab step and the threat of Zach trying to get to the rim. Adams is almost entirely at the paint and his 7 foot frame is not nearly as effective as it would have been before Zach went to work on the high post facing the basket.

One does not simply achieve the double double on a consistent basis. Some, like Kevin Love, are able to shoot the three and rebound. Others, like LaMarcus Aldridge, use their length and athleticism to shoot from mid-range and gobble up boards. Then, there is Zach Randolph. Zach will not out-jump or out-range you, but what he will do is use his feet, his head and his intensity to beat you to a spot on the floor and maneuver his way to the ball or the basket.

Regardless of the arena, Zach Randolph can use his savvy and skill to bully the block every night.

Zach Randolph has mastered the art of the double-double, to the tune of being the Memphis Grizzlies' all-time leader in the category, and he will continue to make the paint his home regardless of what NBA city the game is taking place in. You may not get to see him too often on the national stage, but just ask any NBA blogger, writer, Memphian or Blake Griffin.