In this series, the shooting form of every single Grizzly will be broken down and dissected. Next up is Tayshaun Prince.

If you missed the first piece in the series, find it HERE. It will serve as an introductory piece and reference tool that defines technical shooting terms and such.

Everyone is into hot sports takes these days. Here's one. Tayshaun Prince is not a very good shooter. As a matter of fact, his poor jump shot has earned him the nickname "Clanks" by writers and fans alike. However, for someone whose shot chart looks like this, it is somewhat surprising that his form actually possesses positive qualities.

Without further ado, here is the good, bad, and the ugly of Prince's shooting form...

The best shooters in the NBA perform three actions during the gather: 1) Dip 2) Turn feet and shoulders 3) Hop

Tayshaun Prince has the first of those three items, the dip, down pat. He dips the ball from his chest anywhere from 6-12 inches down to his waist to gather himself before rising for the shot. This first action sets Prince up for a much more fluid shot than if he just went straight up when he received the ball at chest level. Watch Prince catch the ball and bring it down to his shooting-side hip before going back up for the shot in the clip below.

The next step of the gather is aligning the feet and shoulders properly. To create the best chance to shoot the ball straight on target, a player should align his shooting shoulder and strong-side hip to the basket by placing his feet where they face just to the right or left of the rim, depending on which hand he shoots with. Utilizing this turn is particularly important for players like Prince that struggle to keep their shooting elbow in. By slightly turning his feet to align his hip and shooting shoulder with the basket, Prince mitigates this issue.

However, Prince does not really utilize the turn consistently, and he struggles in part because of it. Prince sometimes squares his feet to the basket, which is what youth players everywhere are taught even though it isn't the way the best players in the world gather for a shot. Notice the difference between the two images below. In the first, Prince employs the turn. In the second, Prince basically aligns his feet straight on with the basket with no turn. Consistency is key. 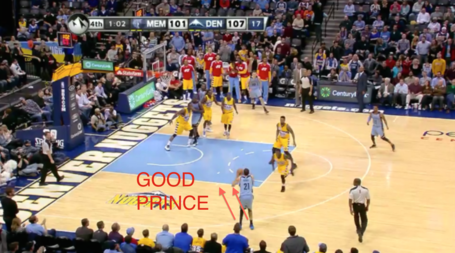 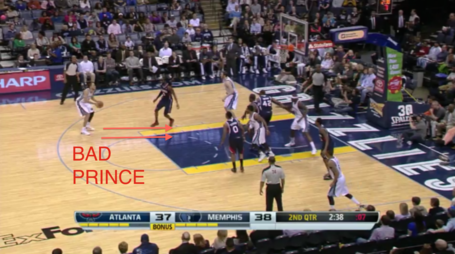 The reason the hop is preferred over the one-two technique is quickness. Stepping into the shot slows down the gather so much that it gives the shooter's defender a chance to recover and better contest the shot, thus lowering the percentage of a make. Also, the hop would allow Prince to get more explosion on his jump, which could be helpful for the arc on his shot. Check out in the two images below what I mean by the one-two technique Prince uses. 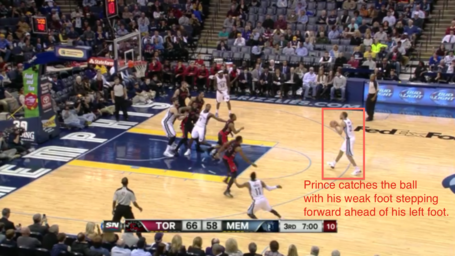 Here comes the second step to get his feet even. 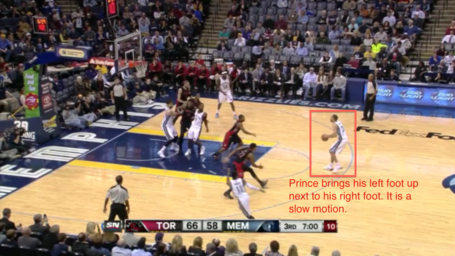 As shown in the examples above, Prince struggles with a couple things before even rising for the shot. This sets him up for failure early on in the jump shot process. If Prince would practice consistently turning his feet and attempt adopting the hop, it could help his jumper out considerably. However, it is really too late for him to change at this point in his career.

Grade for the Gather: C+

On the rise, all the best shooters sway their feet forward with a slight bend at the waist, forcing their shoulders back into a relaxed position. The whole point is to relax the body for a smoother shooting motion, thus keeping the player from shooting stiff and muscling the ball up to the rim. Alas, Prince does the latter rather than the former, where it looks like he is pushing the ball up to the rim most of the time rather than actually shooting. It would not be fair to say that Prince always shoots straight up and down though. Sometimes, he does perform the sway. But, again, shooting is all about consistency, and Prince doesn't sway every time. Not even close.

To prove that Prince does occasionally sway, check out the images below. 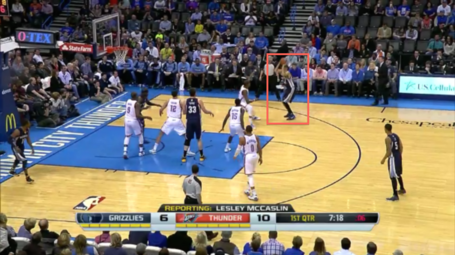 Next, Prince will sway his legs slightly forward, and his shoulders will tilt back. 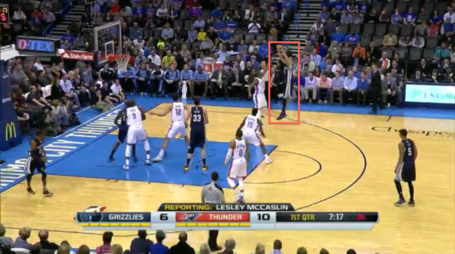 Upon landing, notice Prince's feet are in front of the spot he jumped from. That's what you want from him every time. 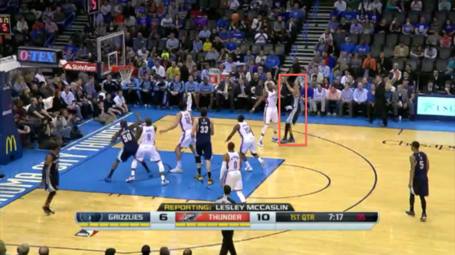 Unfortunately, Prince does not sway every time. Far too often, he jumps straight up and down, which kills the arc on his shot. This just adds to his list of shooting flaws that makes it harder for his troubled shot to fall in the basket. Below is what Prince does too often. 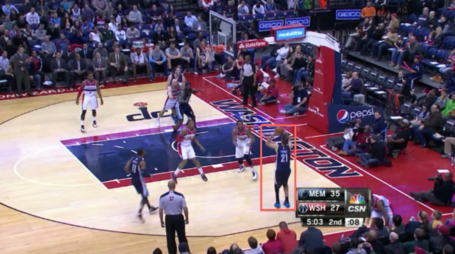 In the air, Prince's body is straight as a board, and he does not sway at all. His shot is incredibly flat as a result, and the shot clanks short off the near side of the rim. 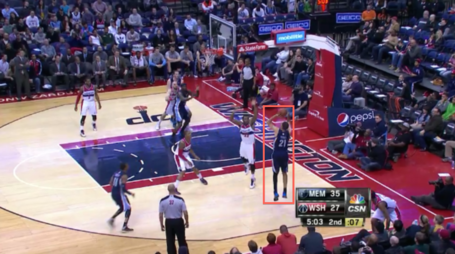 To end the shot, Prince lands in the same place he jumped. That's not ideal. 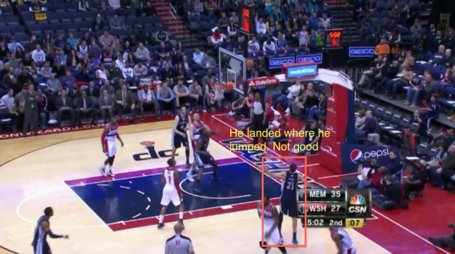 To see Prince's stiff shot in all its glory, check out the video below.

Grade for the Rise - B

Where to even begin on Prince's release and follow through? One of the most basic things a good shooter does is release the ball before he begins his descent to the floor. This might be Prince's biggest issue. He appears to release the ball on his way down nearly every time. Even if he did everything perfect leading up to that point, which he doesn't, it would all be nullified by him releasing the ball too late. It's subtle and difficult to pick up on, but notice in the video below how Prince releases the ball a split second too late.

Another area where Prince struggles on the release is the positioning of his shooting elbow. The shooting elbow should be tucked in and not extend outside of the body frame. Prince grapples with keeping that elbow tucked in, and the accuracy on his shot suffers from the positioning of his shooting elbow. In the picture below, the small red arrow shows Prince's elbow poked outside of his body frame. This prohibits Prince from launching his shooting arm directly towards the rim upon release, keeping his shot from going straight at times. 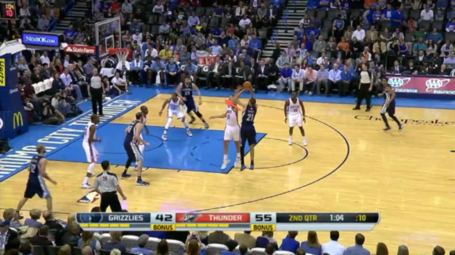 One part of the release Prince does get right is his hand positioning. Prince places his shooting hand directly under the ball with his wrist bent back. Prince does struggle with shooting with his fingertips though. Rather, he relies on his palm to push the ball up to the rim too often, another element contributing to his flat shot. Look no further than the main picture of this piece to notice Prince shooting with his palm. As for his guide hand, he utilizes it properly, removing it just before he releases the ball.

Last but not least, Prince's follow through is solid. He employs the index finger tactic, where it is the last finger to touch the ball on his release. It is difficult to tell, but he does this consistently. He also doesn't pull his follow through back too early, often holding it until the ball meets the rim. There is not much that is textbook about Prince's shot, but his follow through deserves praise.

All in all, Prince's shoddy technique makes him a subpar shooter. It hasn't always been that way for him during his career, but aging or some other phenomenon has caused his form to corrode. Watching Prince lose to Father Time is sad, but it's no mystery why fans are clamoring for Prince to play less minutes given all the flaws in his shot. If he can't space the floor or knock down jumpers consistently, his value diminishes a great deal. Hopefully Prince can give the Grizzlies just enough to make it into the playoffs this season. Who knows, maybe he will turn it around and help the Grizzlies ride a wave to another deep playoff run? It's doubtful, but Grizzlies fans are left with nothing but hope and prayer when it comes to Prince's shot at this point.