Your Memphis Grizzlies are starting a 5 game road trip tonight against the Utah Jazz, a trip that will certainly play a large role in the Bears of Beale Street's playoff hopes with only 12 games left in the regular season. Utah is young, athletic and has nothing to lose. In a building where Memphis has struggled in recent years, veteran leadership and aggressive play will have to rule the day if the Grizzlies hope to start the winding road through the West Coast the right way.

For the Jazz perspective, check out SLC Dunk.

Have you checked out the Western Conference records for the month of March lately?

Goodness gracious. Here are the records for the 9 teams in the playoff hunt and the winning percentage for the month.

Pretty impressive. Outside of the fading Portland Trail Blazers, who are missing LaMarcus Aldridge terribly, all winning records. Only one other team, the Dallas Mavericks, are below 60% winning percentage for the month but are still above .500. The Grizzlies, as hot as they are, have the 3rd best winning percentage behind the Spurs and Clippers. Houston has a winning percentage over 70%.

The moral of this story? The West is a mine field, and while Memphis has gained ground in the playoff hunt that ground is more like sand than solid concrete. They are only 2 games separating the Grizzlies from the 5 seed, and there is only a game between them and being out of the playoffs entirely. If they are to successfully navigate this treacherous landscape, they must win the games they are "supposed" to win. A game in Utah against a struggling Jazz team (2-11 in March) fits the bill.

Memphis must tread lightly and navigate the minefield that is this road trip with efficient offense and suffocating defense.

However, Memphis has not had the best of luck in Salt Lake City as of late. Since 2010-2011, the Grizzlies are 1-4 in Utah and in their last encounter just last week the Jazz outperformed the Bears of Beale Street in the 2nd half 54-48. The Jazz are young, athletic and have nothing to lose; quite dangerous for a team in Memphis' situation. Tread lightly, Grizz Nation; this game will not be easy.

The Jazz's young wing player has had the best of times and worst of times this season, and not surprisingly it often coincides with a Jazz win or loss. Here are his stats this season in wins and losses.

When Gordon Hayward is on, especially from 3, and facilitating for others through assisted baskets the Jazz are a far tougher team. The Grizzlies need to be aware of Hayward's position on the floor at all times and not allow him to be such a large part of their offensive flow.

Enes Kanter and Derrick Favors have all the potential in the world. However, they are playing checkers right now while Marc Gasol and Zach Randolph play chess. In their game against the Jazz last week, GaZBo went 14-30 with 41 points and 20 rebounds. Meanwhile, Kanter and Favors were 9-24 for 18 points and 20 boards. While the rebounding numbers are even, the scoring in the lane from the front court makes a tremendous difference. Another stellar performance from our All-Star big men would be a big step forward.

Heading in to the home stretch of the race for the playoffs, Memphis will need more production from Courtney Lee. Here is his shot chart from the last 5 games. 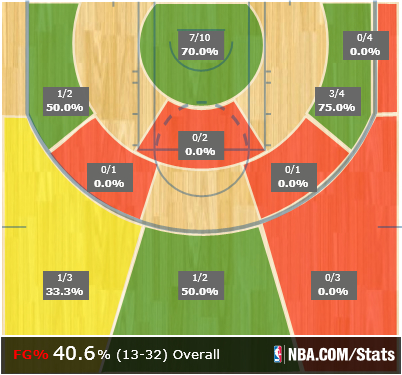 40.6% from the field, 16.7% from 3. You would expect those numbers from Tayshaun Prince for stretches, not your 4th scoring starter. The good news is that this is far below his season averages of 48.6% shooting and 36.2% from beyond-the-arc. Courtney Lee is due for a great run, and there is no better time to start than game 1 of a 5 game road trip against one of the worst defensive teams in the NBA.

This game will not be as easy as many would hope. The Jazz will fight, and will make a run even when Memphis seems to be pulling away. However, the cream tends to rise to the top and Memphis' big men will be the difference, aided by a good Courtney Lee performance.