How should the Memphis Grizzlies minutes at Small Forward be split up?

Motivated by the GBBLive Question of the Day from last week, we take a closer look at who should get the "starter" minutes at the Small Forward position. Turns out, the answer lends credence to the "strength in numbers" argument.

Share All sharing options for: How should the Memphis Grizzlies minutes at Small Forward be split up?

Ever heard of a "backfield by committee?"

If you haven't, it is a football term referring to having multiple running backs, all of similar skill level but excelling in different areas of the position. One of the best NFL teams at utilizing this philosophy was the New York Giants of the 2000's. Whether it was Brandon Jacobs (Thunder) and Tiki Barber (Lightning) or Jacobs (Earth), Derrick Ward (Wind) and Ahmad Bradshaw (Fire), the Giants had success utilizing different backs at different points. Need a yard? The massive Brandon Jacobs could get it for you. Want a flare pass out of the backfield? Tiki Barber or Derrick Ward could help you there. When the game is on the line? Few were as explosive as Ahmad Bradshaw when the Giants needed him to be.

Live Recap of Grizzlies/Wizards with GBB

Want to hear the reaction from last night? Listen to our recap with Keith Edwards and Ryan Hoover on Blog Talk Radio.

Live Recap of Grizzlies/Wizards with GBB

While basketball is a different game from football, there are some connections that can be made. For the Memphis Grizzlies, a log jam of wings can be turned in to a "Small Forward-by-committee" situation. Will there be nights that one player is on fire and should get the run regardless? Absolutely (i.e. Tayshaun Prince Monday night in Washington.) However, the law of averages would suggest that the sum of four different players would be greater than the efforts of just one.

Which four? How many minutes out of 48 should they play at the Small Forward Position? Is there such a thing as "starters minutes" at the SF spot for this Grizzlies team?

There has been no player more scrutinized this season, especially by this writer, than Tayshaun Prince. These season averages do nothing but support that criticism: 6.3 points on 39% shooting, 33% from three, 3 rebounds, 2 assists, half a steal and .2 blocks. Here is his shot chart from before the All-Star Break. 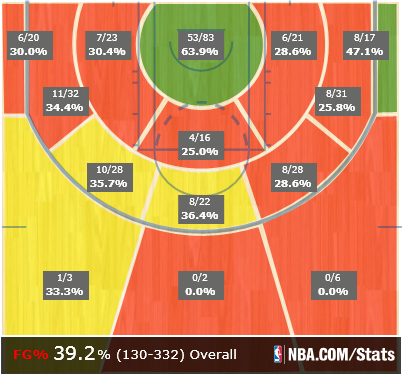 This, is any language, is not very good.

His Player Efficiency Rating, or PER, of 8.53 is tied with Jason Maxiell for 371st in the NBA. Wings who average more than 20 minutes per game with PER's higher than Tayshaun include Kentavious Caldwell-Pope of Detroit and Jared Dudley of the Los Angeles Clippers, both of whom make significantly less money than Tayshaun.

Prince's PER for the season is only .29 higher than John Salmons of the Toronto Raptors.

However, Tay's game has risen from the dead since the All-Star Break. In 7 post All-Star games, Tayshaun is scoring the basketball more efficiently; 8 PPG on 47% shooting, including a whopping 44% from 3 point land (and he is shooting more threes on average as well, a much more efficient shot than the dreaded mid-range jumper.) His steals, blocks and assists, while a marginal rise, are also up, showing more activity. Here is his post All-Star shot chart. 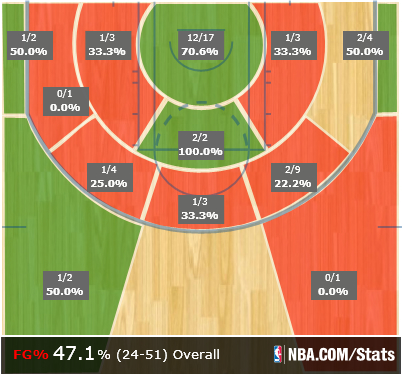 Surely a smaller sample size, but better all-around. Notice, however, that he is still shooting just as many of his shots from the inefficient mid-range as he is from inside. In 7 games, he has taken 9 three pointers. While his length and ability to defend at times is valuable, these numbers do not represent a player who should get 26 minutes a game. Tayshaun at 16 minutes would allow for other players who are more efficient and athletic to see the court.

So, when should Tayshaun see this time? Early. Here are his numbers in the first half of games as opposed to the second half...

Shooting percentages, assists, points all are higher in the first half. At this point in his career, Tayshaun benefits from starting and getting the most out of his game early. Does this mean you don't give him a chance on his good nights in the second half or in clutch situations? No, his experience is valuable in those moments. However, outside of those outlying moments there are other players who bring more to the table moving forward.

Mike Miller is truly showing that "Let it Fly" is not just an energy drink or catch phrase, it is a way of life. Miller is shooting 43.8% from beyond-the-arc this season, good for 6th in the entire NBA percentage wise among players who average more than 20 minutes per game. His shooting has opened up lanes for cutters and in the paint.

So why only 16 minutes, and why not as the starter? First off, his defense leaves a bit to be desired. Miller's defensive efficiency rating is over 108, as compared to Tayshaun's 100.7. Also, while Miller is the only grizzly this season to play in every game (!!!), his health has been an issue in the past. Miller is needed in April and May even more than he is needed now, so limiting his minutes will make him more effective down the road.

Which Grizzly should take the final shot?

Rank our latest list according to who you'd like to see taking the final shot for the Memphis Grizzlies in a big game.

Which Grizzly should take the final shot?

Also, with the addition of Courtney Lee, Tay's shooting struggles do not hurt the Grizzlies as much. As part of the Grizzlies' bench alongside Tony Allen and James Johnson at times, Miller's shooting is invaluable.

Miller has also done a tremendous job off the bench playing off of Nick Calathes; as Miller and Calathes play together, their chemistry and Calathes' ability to find Miller for catch and shoot opportunities grows. Check out this sequence from the recent New York Knicks game.

Calathes drives and just at the right moment finds Miller for open jumpers. The pick-and-pop game, in addition to drive and kick and passes off screens, allows for Miller to be most effective for the Grizzlies and also enables Johnson, Calathes and Allen to drive to the basket, a strength of their respective games. Their defensive prowess also enables Miller to be put in to better situations of that end of the court.

The Grizzlies' bench is very symbiotic; they make each other better and because of his ability to hit the long range shot he is needed to balance out that bench unit.

Dr. JJ is one of the most explosive and dynamic athletes the Grizzlies have had in recent years outside of Rudy Gay. He is the only player currently on the roster capable of leading the league in blocked three point shots, defending Blake Griffin in the post and doing this.

Awesome, awesome stuff. Dr. JJ's game, while still developing (3 point shooting percentage at 24%, tendency to foul) is as versatile as anyone on the roster. This allows for him to play only 10 minutes at the SF spot; James Johnson as a stretch 4 is becoming more and more utilized, and it should be. Ed Davis' minutes have dwindled, and James Johnson allows for better defense of stretch 4's and the capability to defend the post when necessary. His struggles from 3 would not hurt Memphis at the 4 with Courtney Lee or Mike Miller on the floor, and his explosiveness would enable him to take most Power Forwards off the dribble and to the rim.

So, 10 minutes at the SF, 14 or so at PF, 24 plus MPG for the appropriately nicknamed Kid Dynomite.

Tony Allen is beginning to regain some of that defensive swagger that Grizzlies fans know so well and love so much. The long rest from his injury means fresh legs, which "The Grindfather" has likely not had in March for several seasons. His willingness to come off the bench gives Memphis a tenacity and energy that can be contagious and change games. His offensive game has evolved this season, meaning teams cannot take him for granted on that end as much as they have in the past.

So why only 6 minutes at small forward? Ideally, he isn't a small forward; he is a shooting guard. He can be the primary back-up to Courtney Lee at that position, giving him 16-18 minutes of rest a game at SG. That still has him short of his usual 24-26 minutes a game, though, so TA can, for stretches, play the SF. Tony's on ball defense on players like Kevin Durant is not as dependent on length as it is on intensity and fight. Here are some great examples of that.

Aggression, hands, the ability to play over top of and off of screens and a refusal to give up on a play allow for Tony to, for stretches of time, defend players who have more natural physical ability. This is what makes TA one of the top perimeter defenders in the NBA, and as the season continues through this all-important month of March Allen will be called upon to defend these taller wings from time to time.

The SF-by-Committee philosophy allows for the strengths of all four players to be maximized before their flaws shine through.

The SF-by-Committee is not ideal. Ideally, you have one above average player who can handle 30+ MPG at that spot. The Memphis Grizzlies can take lemons and make lemonade in this situation. Much like the New York Giants, they can play to the strengths of their individual players and insert them in situations where their effectiveness is maximized.

Experience, shooting, versatility, athleticism and defensive effort all are represented in these 4 players; use it. "The Fantastic Four" will make all the difference for these Memphis Grizzlies.