The disappointing season of Ed Davis, bench warmer for the Memphis Grizzlies.

Great athleticism. Poorly timed bone-headed mistakes. Tremendous length and explosiveness. An unrefined offensive game. Ed Davis' career and time in Memphis has been a series of ebbs and flows, highs and lows. As it appears to approach its end in the coming months, how did we go from "the key piece of the Rudy Gay trade" to a centerpiece on the Grizzlies bench?

Share All sharing options for: The disappointing season of Ed Davis, bench warmer for the Memphis Grizzlies.

Full disclosure: Ed Davis and I have some things in common.

Ed Davis is from the Washington D.C. area, as am I. Ed Davis went to school in Richmond, VA (high school at Benedictine), I went to college in the Richmond area. Ed Davis played at the University of North Carolina at Chapel Hill, and I was able to follow his career closely as a fan of ACC basketball. I've talked with former coaches of his and understand his game and where he is from.

I always saw the potential in Ed Davis.

It is really hard not to, in a way. 6 foot 10 inches tall, can run like a wing player, can jump with anyone. His talent is undeniable and was on display in what was arguably his best game at UNC against Michigan State.

Dick Vitale references his length, his quick feet, his athleticism. The word he uses more often than any to describe Davis is "talented." However, watching this clip from 5 years ago, Vitale's words are also remarkable in their relevance to today.

Poor grammar not withstanding, Vitale's point was clear; Davis was unselfish on the court but also needed to become more assertive when it came to developing his own game.

Davis played in every game at North Carolina that season, helping the Tar Heels win a national championship against that same Michigan State team with 11 points and 8 rebounds off the bench. He was named to the ACC All-Freshman team and also was named co-Most Improved Player for UNC that season.

Despite the fact many considered him to be a top-5 pick in the 2009 NBA draft almost solely based off of talent, Davis decided to return to UNC for his sophomore season. Ed did not get the full opportunity to develop his game as a starter, however; he injured his wrist and was out for almost half of the 2009-2010 season. After the injury, he elected to forgo his final 2 years of eligibility and enter the NBA draft.

He was drafted 13th overall by the Toronto Raptors. Here's the analysis of the pick from that night from Jay Bilas and Stuart Scott.

Once again, the analysis of Ed Davis by Jay Bilas from 4 years ago is haunting.

...long arms, can block shots...doesn't have a whole lot of post moves...limited in the post...his rebounding is what sets him apart...he's going to get stronger and improve his strength.

The biggest take away from this analysis? MUST IMPROVE STRENGTH.

After a short stay in the D-League (ironic in hindsight) in Toronto Ed Davis played in 176 games, only starting 50 of them. He was a darling of the stats per 36 minutes crowd, averaging a double double using that measurement. He showed the capability to rebound at a high level, just as Bilas said he would. Ed's shot charts his first two seasons show his offensive strengths and weaknesses well. 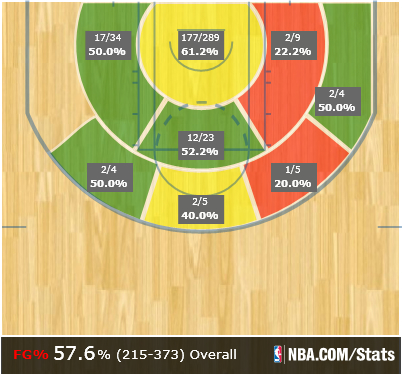 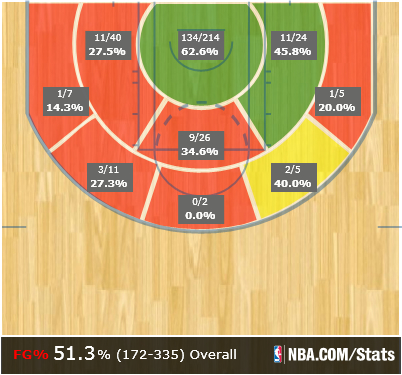 A consistent finisher at the rim, an inconsistent scorer from outside the paint. This was an aspect of Davis' game that also needed to be grown according to Bilas; the ability to score facing the basket. Signs, flashes, but nowhere near enough to warrant starters minutes, at least offensively.

Defensively, however, Ed Davis showed the ability to drastically affect games. In his two full seasons in Toronto, he averaged 1.5 blocks per game per 36 minutes. He impacted opponent's ability to slash and drive to the rim, as John Wall learned the hard way here.

Ed Davis was highly coveted for his athletic ability, and multiple teams were interested in his services if he were to become available via trade. Davis became more expendable to the Raptors with the growth of Amir Johnson's game and the acquisition Jonas Valaciunas. The Memphis Grizzlies were able to secure the services of Ed in January of 2013 in the "Rudy Gay trade" which sent Ed, Tayshaun Prince and Austin Daye to Memphis, Jose Calderon to Detroit and Rudy Gay and Hamed Haddadi (although Haddadi never played in Canada) to Toronto.

Ed's arrival did more than raise some eyebrows. Zach Randolph, the Grizzlies' star power forward, had suffered a knee injury the season before and was believed to possibly be in the decline of his career. In addition to that, his massive contract led some to believe that Zach's days in Memphis were numbered, and Ed Davis was the pick of the new ownership/front office to replace Zach. Ed's ability to play the 4 with such athleticism was (and to some still is) the ideal compliment to the game of Marc Gasol, the Grizzlies' franchise Center.

However, things did not go according to plan for Ed early in his run. He averaged only 15 minutes per game once he got to Memphis, the likely scapegoat of Lionel Hollins' angst towards the front office's parting with Rudy Gay. Darrell Arthur, despite his proneness to injury and lack of size that Davis possessed, continued to get the lion's share of minutes. Hollins would openly complain about not having a big to play center minutes, while all the while Ed Davis sat on the bench, and the numbers showed that his lack of minutes affected him, especially offensively.

Even in limited minutes, Davis' ability to defend the rim shined through.

In very sparse playoff minutes (6 per game) he struggled to find a rhythm, manifesting itself in fouls, poor offensive production and incidents like this one.

With Lionel Hollins departure and the trade of Darrell Arthur for Kosta Koufos, it appeared the log jam at power forward would be removed and Ed Davis would have the opportunity to finally show in consistent minutes his ability to impact games, the growth his game has made since his time in Chapel Hill and Toronto. As outlined here on this very site by our Matt Hrdlicka, this season was going to go a long way in determining whether Ed Davis would be "the future."

The unfortunate thing is, Ed Davis showed that he was still that player from UNC, from Toronto. The strength that Jay Bilas called for? Ed is the same size now as he was in college, listed at 6 foot 10 inches, 225 pounds. The ability to score the basketball while facing the rim? The numbers don't lie... 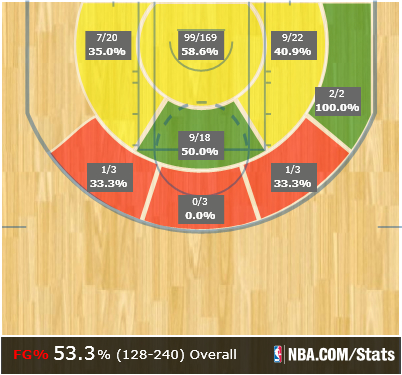 Offensively, he is essentially the same player. His game has not grown to the level in the post and from mid-range that it needed to. Still just the little hook shot, still inconsistent from outside the paint. He struggles receiving passes from driving players at times, almost as if he doesn't expect them. His basketball awareness offensively is that of a younger player, not of a player currently in his fourth NBA season.

Defensively, Ed is still a force protecting the rim. Opponents are shooting 40.1% at the rim against Ed Davis for the season. That is better than Serge Ibaka, Roy Hibbert and Andre Drummond. His length, athleticism and explosiveness are still very valuable. His lack of growth offensively and physically limit his overall effectiveness, however.

Davis' defensive statistics are comparable to Ibaka's, Hibbert's and Drummond's.

Zach Randolph is having another very good season, averaging a double-double. There is a distinct possibility that Zach will stay in Memphis, a city that loves him, for more years and less money. Ed Davis' style of play and growing pains have not endeared him to the Memphis community like Zach's development as a player and as a man here in the Bluff City has. Amongst Grizz Nation, Ed Davis has been a scapegoat for poor play, much like he was Lionel Hollins' scape goat. Heading into restricted free agency, it is hard to see Ed Davis, with playing time once again inconsistent under a difference Head Coach, as a Grizzly much longer.

Injury, players in front of him, a lack of consistent minutes can all be used as reasons for Ed Davis' inconsistent play. However, the finger at some point for Ed Davis must be pointed at the man in the mirror. As someone who has watched Ed Davis play for years, his game today is far too similar to his game when he was 18 or 19 years old. He still has the body of that Sophomore at North Carolina, and the growth in his game offensively has just not been there enough.

I still see the potential in Ed Davis. Even now, as I look back over the years and think of how we got to this point of "the key piece" of the Rudy Gay deal having multiple Did Not Play-Coaches' Decision under his belt. You cannot teach length, you cannot coach explosive athleticism. Ed Davis will continue on in the NBA, he will go somewhere where he will get starter's minutes, where he will get the chance to be the man.

It could have been Memphis, I do believe that. Ed Davis just wasn't ready to carry the ball. The problem with youth is, you can't have that potential forever. At some point, potential must become reality. I hope Ed Davis, of Washington D.C., of Richmond, VA, finds that reality.

Until then, we can only think of what might have been, and what could eventually be.