A closer look at one of the Grizzlies' few plays that puts Mike Conley on the move without the ball.

Though it was a part of their playbook before, the Memphis Grizzlies have been utilizing a horns double inside down-screen play for Mike Conley with more regularity since his mid-February return from an ankle injury and especially in recent games during the late-February/early-March stretch. It's proven effective, capitalizing on Conley's speed by putting him on the move and through a crowd of screens. Many times, defenses won't be able to keep up.

Let's take a look at the play (and this example actually comes from a January 10th game against the Phoenix Suns).

The play always starts with the Grizzlies in a horns formation, with a big at each elbow. One of the Grizzlies' wing players (and every time I remember seeing it, it's been Courtney Lee) will move across the top of the arc to one side of the wing to start the play. It's not an action of much significance, with no real opportunity to create a shot so it doesn't even work as misdirection. You can see the first pass goes to Lee in the play above, but sometimes the ball will go to one of the bigs at the elbows.

One way or another, the ball will end up in the hands of the big closest to Lee. In this case, that's Zach Randolph. Conley will cut past that big to get into the paint, sometimes getting a screen. 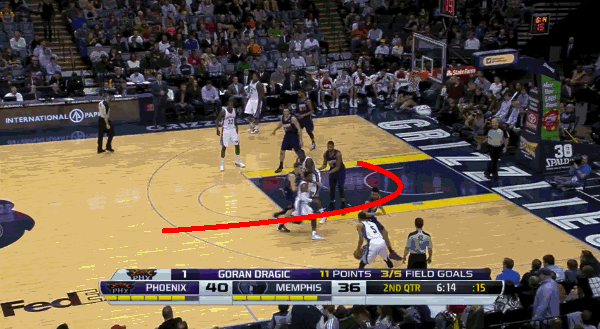 Conley will keep going through the paint, coming out on the far low block where he's going to receive two down-screens. Here's the key part: notice how James Johnson is inconspicuously chilling in the far corner, as if it were any other play? As Conley makes his cut, Johnson's going to suddenly come under Ed Davis to set one of the two down-screens involved here. Out of nowhere, you have two moving parts coming to that same area to go with the big man that was already there setting the second down-screen. If you're a defender there, good luck making the right read and communicating it in time to stop the easy score.

Who should take the last shot for the Grizzlies?

Which Grizzlies player has the best combination of skills to score a basket when it's all on the line?

Who should take the last shot for the Grizzlies?

Another twist that the Grizzlies often employ, and they did in this example, is have the far corner wing simply make a cut from the corner to the paint as Conley comes out. In theory, that can lend itself as a layup off a backdoor cut, although the Grizzlies rarely look to actually pass there. Instead, it's just more movement to confuse the defense because that cut across the middle will intersect with Conley finishing his cut. It's not strictly a screen, but the added motion and confusion is basically an equal trade for the lack of actually putting a body on Conley's defender. There's still going to be a lot of bodies to navigate through, and Johnson's defender actually goes over Ed Davis so as not to get in Goran Dragic's path. 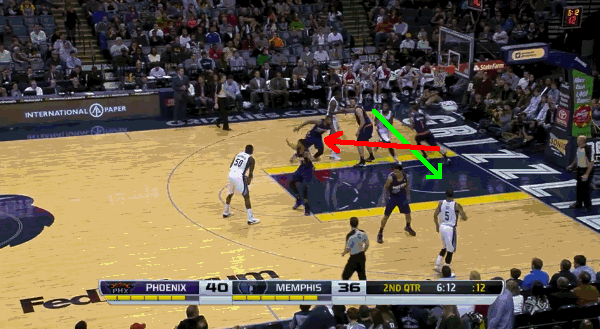 (Conley is hidden behind Dragic, wearing jersey number 1, on the Suns.)

From there, Conley has a number of options. The first one is to curl over the screen and go right to the basket, as he did in this example to score with a sweet righty floater. Between Conley's speed and ability on float shots, he can suddenly turn the corner and get a shot up from close range before the defense recovers. 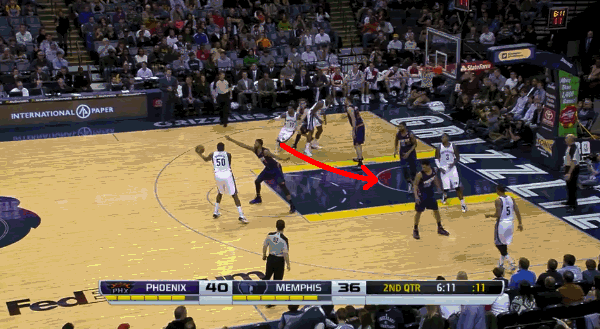 Because of James Johnson's cut through the paint, Johnson's defender was busy recovering back on to him after going over Davis and couldn't help on Conley because of it. The only other possible help defender was Ed Davis' check, Miles Plumlee. However, notice all of the space on that side of the court now that Johnson is gone and Conley's curling back in: if Plumlee makes the decision to help, what happens to Ed Davis?

Beautiful. That Marc Gasol and not Ed Davis, but small difference. Seeing Ronny Turiaf is about to help over on Conley, Gasol slips his screen and ends up with an easy layup. (Minor detail: Tayshaun Prince didn't set a screen here, but flashed to the basket first while Conley waited him out. This is the only time I've ever seen the Grizzlies do that with this play.)

The Disappointing Ballad of Ed Davis

Great athleticism. Poorly timed bone-headed mistakes. Tremendous length and explosiveness. An unrefined offensive game. Ed Davis' career and time in Memphis has been a series of ebbs and flows, highs and lows.

The Disappointing Ballad of Ed Davis

It may seem the best way to defend that would've been a switch, but in reality, that's not an option either. Conley has the option of curling, and his other option is to continue the cut to the perimeter. A switch risks exploitation of a big man trying to play defense on a little dude out on the perimeter, which is especially risky when said little dude has wicked handles.

Even without a switch, Conley will always have the choice to continue his cut back out to the perimeter instead of curling. He could have an open catch-and-shoot three-pointer if his defender struggles enough with the screens (legitimately having two screens instead of a misdirection corner-to-basket cut helps more here). That said, Conley hasn't shown much of an indication to pull the trigger on jumpers directly out of a down-screen. Instead, he prefers to slow it down for a pick-and-roll. That's fine too – this play gives Conley a lot of space on his side of the court when finished, and we know what he can do in the pick-and-roll with the Grizzlies' bigs.

Ironically, this is the only example I show you where it's a "true" double down-screen, with two guys actually setting hard screens. Well, I digress.

Because of the open-ended nature of this play, it lends itself to a lot of variations. I've shown you the curl, the slipped screen and the pick-and-roll. However, it's also been used to get into post-ups (either by sending a screener to the strong side after his screen or by Conley finishing his cut to the outside and then throwing it into the post) and as we've seen, has the potential to create backdoor layups.

It all revolves around Conley's ability to threaten a defense with his speed, as it forces the defense to make a split-second reaction on how they want to defend the post and make sure everybody is on board. Because of the second screener darting in at the last second, there's often very little time for a defense to orient itself to the situation before it's too late.

From there, we can see Conley's entire offensive skill-set utilized under sunny conditions: a curl for a shot at the rim, a pick-and-roll with one of the Grizzlies' dangerous roll men or an open catch-and-shoot from three.