Just when you thought it couldn't get any worse....

Share All sharing options for: NBA to review plays in three Memphis Grizzlies games, could revert wins to losses

The NBA announced this morning that the Committee of Officiating would be reviewing three separate plays from recent games to determine if Memphis Grizzlies victory was correctly awarded. Plays from 3/26 at Utah Jazz, 3/12 at New Orleans Pelicans and 2/26 vs LA Lakers will be reviewed due to "league skepticism" in regards to the physical contingencies required to give Dave Joerger and the Grizzlies the ability to effectuate the sustained probability of the contests outcome.

Conley being investigated for use of "Crux Ansata" maneuver

I'm told the primary players in question are Mike Conley, James Johnson and Nick Calathes. Mike Conley for his ambiguous use of an elite ball-handling move known as the "Crux Ansata" that has been outlawed in the NBA since the late 90's. James Johnson is under scrutiny for an apparent use of a subtle, Cabalistic martial arts move on Gordon Hayward that caused a crucial turnover. Nick Calathes, believe it or not, is rumored to have been on the Grizzlies bench applying a concealed amount of liquid Stickum to his hands before coming back into the 4th quarter against the Pelicans. 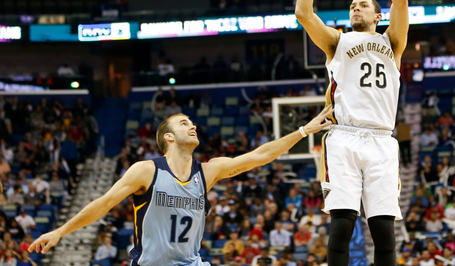 It's unclear whether a score adjustment would also come in tandem with disciplinary action from new NBA commissioner Adam Silver, but the effects from losing an additional 3 games in what is already a tough spot for the Grizzlies in regards to playoff seeding will most likely sink their playoff hopes for the season.

I'd like to take this time to mention to perhaps some and most but maybe not and definitely not absolutely all of our readers for participating in this joke. None of what you have read on this page is true in any sense or context and was completely conjured by my imagination for your entertainment pleasure. April Fewls!