MEMPHIS, TN- The Memphis Police Department reports this morning that Grizzlies backup PG Beno Udrih was found inside one of the lion enclosures at the Memphis Zoo around 2:00am. Udrih was apparently disoriented but found to be forging a very strong friendship with the lion, who was grooming Udrih and even sharing some of his zebra meat with the Slovenian basketball player.

The Memphis Zoo tells us that Udrih apparently snuck in with a group of Rhodes College kids late after returning to Memphis following the Grizzlies west coast road trip. MPD toxicology reports came back completely clean on Udrih, although there were 56 emptied Skittle packages found in Udrih's car once zoo officials wrangled him away from the lion. 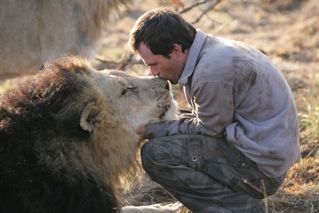 Beno's love of animals and nature has made him a natural fit here in Memphis. It's unclear whether this odd behavior will affect his playing time, but as Udrih seeks counsel and help for his Call of the Wild he appreciates the support of generous Memphians.

Take off time...Thank u all for ur support!!! Will keep GNG...nothing but good things ahead!! Good night to u all!!

Remember folks, please have your pet spayed or neutered, and don't forget it's April Fool's Day so it's very likely that none of this is true.